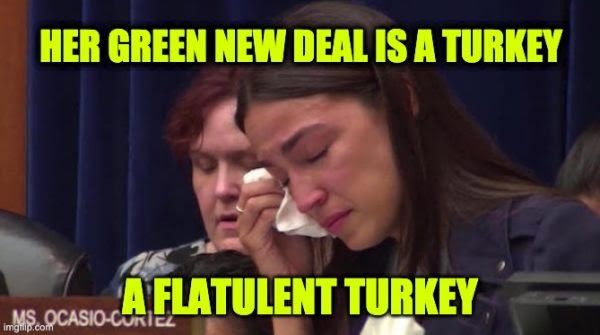 Remember when commentators said that Joe Biden grabbed the moderate wing of the Democratic Party?  And they thought we’d all buy it? That’s adorable. The truth is that the Democrats have gotten so radically leftist,  a moderate is still a left-wing extremist. As if to prove that point to team Bernie, the “moderate” Joe Biden has added proclaimed socialist AOC to his Dream Team. Biden names AOC

Yes, the Big-Time Bernie surrogate from The Squad has joined Biden. No, not Ilhan Omar, although they have similar Israel policies, it’s the other one. The one who popped off about how she and Biden shouldn’t even be in the same party? That’s right. Alexandria Occasional Use-of-Cortex. So deep are her personal convictions that she’s being picked for a role on Joe’s team, even though a short four months ago she made headlines by saying:

Asked for a profile by New York Magazine about what role she might play as a member of Congress should Biden capture the White House, the freshman House Democrat from New York responded with a groan.

“Oh God,” she said. “In any other country, Joe Biden and I would not be in the same party, but in America, we are.”

For someone who bleats so loudly about everyone else being in somebody’s pocket, she sure sells out easily given a whiff of a chance at wielding real political power.

Can you guess what her role will be? If you guessed ‘New Green Deal Advocate,’ you’re right!

Progressive Rep. Alexandria Ocasio-Cortez will co-chair a panel advising Joe Biden on climate policy as the apparent Democratic nominee takes steps to unify the party, it was announced on Wednesday.

Biden said that Ocasio-Cortez is on one of the six policy panels in comments to Las Vegas CBS affiliate KLAS-TV on Tuesday, when the former vice president was asked what he was doing to bring supporters of Sen. Bernie Sanders into the fold.

“We’ve made some changes, we’ve listened to the Bernie supporters and, you know, for example, we have congresswoman Ocasio-Cortez, she is on one of the panels as well,” Biden said. “And so I think we’re going to have a very united party.”

Alexandria Ocasio-Cortez’s “Green New Deal” is more like a socialist manifesto.  She calls for everything from the elimination of air travel, an almost complete rebuilding of every structure currently standing in the United States today,  to redistribution of income,  and money for people who don’t want to work (and so much more). The strangest part of AOC’s “Green New Deal” is her attack on cows and their farts. She wants to get rid of farting cows–no more steaks. My first thought was great, we’re all going to have a huge barbecue. I might even invite PETA.

It is true that on average, every cow releases 30 to 50 gallons of methane a day via farting and belching.  But growing up, I shared a bedroom with my brother, and I can promise you,  he answered the call of the wild burrito much more than the average cow (he might blame me, but that wouldn’t be honest).

One point AOC doesn’t understand is that everyone and everything farts. Even Alexandria Ocasio-Cortez’ cuts the proverbial cheese (but I doubt she admits it). In fact, the average human butt toots its own horn 10 to 20 times a day.

Along with ruining our family barbeques by killing all cows and removing of beef hamburgers, hot dogs, and steaks from the menu, the green new deal won’t work. Along with killing all cows, the environmental pipe dream brought to you by creepy Joe’s new advisor,  Alexandria Ocasio-Cortez, would abolish fossil fuels, eliminate millions of jobs, cost households $600,000 annually at an overall price tag of $93 trillion, and do nothing to stem the tide of climate change.

A report published by the American Enterprise Institute (AEI) says the Green New Deal would not have any effect on the environment, concluding that the impact would be minimal at best.

“Notwithstanding the assertions from GND [Green New Deal] proponents that it is an essential policy to confront purportedly adverse climate phenomena,” the report reads, “the future temperature impacts of the zero-emissions objective would be barely distinguishable from zero.”

We’ve seen what a ‘united party’ looks like to a Bernie Supporter, haven’t we? After all, AOC has refused to pay party dues and has threatened her own party members with being Primaried for not being sufficiently Leftist.

A United Party means that they bow and kiss the Democrat Socialist ring.

This is a serious red flag that the supposedly ‘moderate’ Democrat alternative to Bernie is ACTUALLY a false face on a movement that has been ideologically hijacked by team Bernie Bro.

If you thought that America could ill afford the crushing costs of the ‘Democratic Socialist’ utopian vision BEFORE the Wuhan Chinese Coronavirus gutted our economy, how much STRONGER does that objection become now that the cupboard is bare?

If her vision of tomorrow was fully implemented, the comparisons to a Venezuelan economic future would be anything but hypothetical.

If you think COVID was disruptive to the supply chain, just wait until she unveils her Green New Deal.