Wouldn’t it be funny if global warming were the answer to murder hornets?

Wouldn’t it be funny if global warming were the answer to murder hornets?

This post is somewhat tongue-in-cheek, but not entirely.  The defense that honeybees have against the murder hornet suggests (at least to me) that a warming world might spell the murder hornets’ end.

However, there are other bad things laid to rest at the changing climate’s feet:

The above is just the short list.  We are told with certainty that, based on those always reliable models (I’m being sarcastic), everything wrong will happen because of the Earth’s warming.  Those who say this don’t know their history.

Europe had a warming period from 950 A.D. through around 1250 A.D.  It was a great deal for Europe.  There was more water and a longer growing season, so the population grew.

However, by 1250 A.D., the Little Ice Age set in.  The growing season shrank, and famine took hold, something that was not helped by the incessant war between England and France.

When the Mongol Empire moved toward Europe, the combination of war and climate change meant that both Mongol warriors and traders ended up traveling through regions with plague-infected marmots.  Eventually, the marmots’ fleas hitched rides on black rats in Europe.

The Black Death that these fleas carried would have been explosive under any circumstances, but it was especially dangerous to a population weakened by famine and warfare.  This led to the most devastating pandemic in human history.  When the plague ended, between a third to a half of the world’s population was gone.

Knowing history as I do, it’s been clear that warmth is generally good for humans.  This has always made the “global warming panic” strange to me.  Warm or cold, though, humans can learn to adapt to any climate.

Animals, however, aren’t always so adaptable.  As this fascinating video shows, the murder hornet that’s currently exciting the media now that they can’t scare us with the Wuhan virus is temperature-sensitive:

The way Japanese bees deal with murder hornets is just brutal but satisfying. 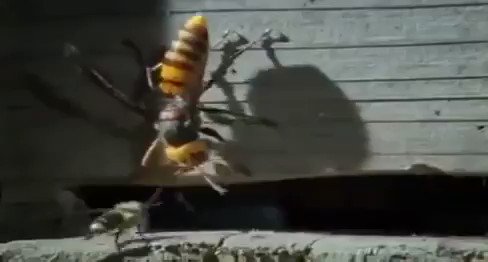 4,821 people are talking about this

Maybe I’m the only one to have this thought but, after watching the video, it occurred to me that a warmer climate might be just the thing to stop those heat-sensitive murder hornets.  Wouldn’t it be great if, after the failure of all the gloom-and-doom predictions from the climate apocalypse crowd, a little bit of global warming destroyed those nasty murder hornets?