We Are All Catastrophists Now

Nobel Laureate, William Nordhaus, also invokes the COVID crisis to provide some mojo for a climate plan he laid out in his 2018 Nobel address. He says, “The quick spread of COVID-19 is a grim reminder of how global forces respect no boundaries and of the perils of ignoring global problems until they threaten to overwhelm countries that refuse to prepare and cooperate.”

Crises love company.  Searching “covid is lesson for climate” on Google generates millions of hits.  Frustrated that the COVID crisis has supplanted their crisis, climate-Armageddon types are coming out of the woodwork with arguments of the form, “the pandemic is a crisis and climate change will be just as bad if not worse.”  The ensuing prescriptions offer up lots of culture change, international cooperation, with a heavy dose of listening to the “experts” and implementing the urgent action they recommend. However, the real crisis is implementing a set of climate policies that will make the world much worse off.

In a forthcoming piece in Foreign Affairs, Nobel Laureate, William Nordhaus, also invokes the COVID crisis to provide some mojo for a climate plan he laid out in his 2018 Nobel address.

He says, “The quick spread of COVID-19 is a grim reminder of how global forces respect no boundaries and of the perils of ignoring global problems until they threaten to overwhelm countries that refuse to prepare and cooperate.”

Having hooked his issue onto the crisis wagon, Nordhaus diagnoses the major problem of climate policy and offers a two-part solution—the same carbon tax he has offered up for decades and giving climate conventions tariff authority to punish those who do not want his carbon tax.

It is worth examining all parts of his story.  First, to what extent are those countries that do not buy into the extreme Kyoto policies really likely to be overwhelmed?  Second, are his taxes really a good idea? Third, how sensible would it be to give tariff powers to climate agreements?

Let us begin.  Nordhaus’s own analysis shows little evidence of an imminent crisis.

Below, is Figure 4 from the introduction and user’s manual for Nordhaus’s DICE model (Dynamic Integrated model of Climate and the Economy).  It shows per capita consumption for a variety of scenarios, including no additional action (Base) and the best choice (Optimal) that uses his finely tuned schedule of carbon taxes.  Consumption is broadly defined to include health, leisure, and environmental benefits. So, we are not talking about a world where people wallow in material goods while the coasts are inundated and the interior burns. 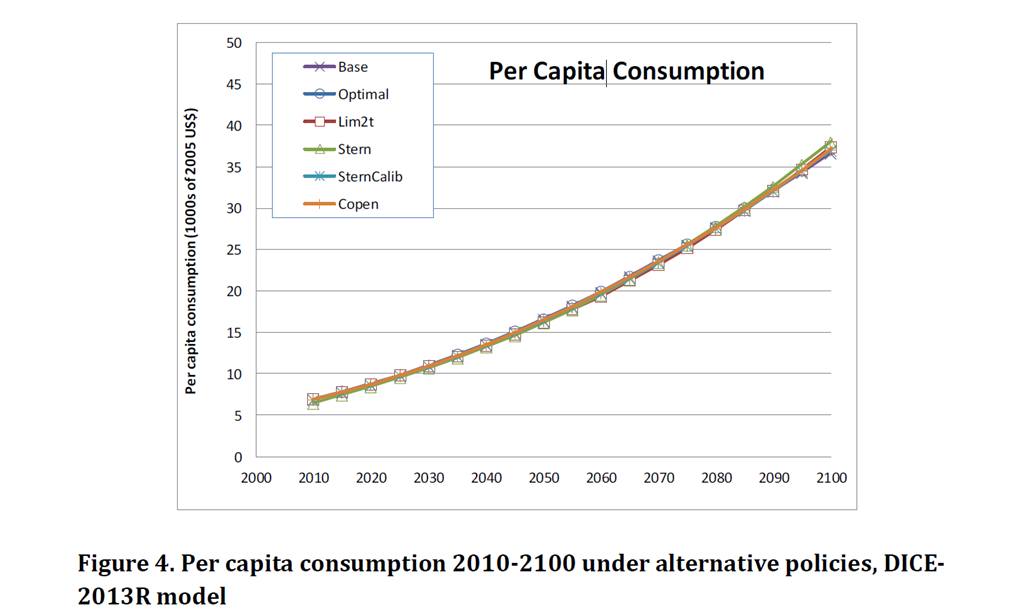 It is easy to see that between now and 2100, there is little difference between getting “overwhelmed” by doing nothing and following the optimal set of carbon taxes to get the optimal amount of CO2 reductions.  The policy paths are virtually one on top of the other. “Crisis” hardly seems like the appropriate analogy.

For all the current teenage angst about lives being ruined, it is well worth noting that with or without action on the climate, lives continue to improve.  When today’s 17-year-olds are middle-aged, they can expect to be about twice as well off as their scorned middle-aged parents are right now. By 2100, countries who do not follow the script will be overwhelmed by being four times better off than they are now.

The corresponding table in the handbook lets us put a finer point on the difference.  Following the path to 2100 shows a four-fold increase in real per-capita consumption. The optimal-carbon tax path instead of the no-tax base path bumps per capita consumption by only two-thirds of one percent.  In addition, to give this theoretical two-thirds of one percent increase to people who will be four times richer, it is necessary to cut the consumption of the poorer earlier generations.

So, what is it we need to do to the poorer current generation to win that extra 0.66% consumption bonus for the folks in 2100?

Nordhaus, like most economists, sees problems as misaligned incentives.  With perfect competition and well-defined property rights, incentives are aligned and markets efficiently (though, not necessarily fairly) manage production and resource distribution.  When any of these conditions do not hold, perfect efficiency no longer rules and there is said to be “market failure.”

Generations of economists have written dissertations and made a living by identifying market failures and proffering solutions.  Typically, the failures are called externalities and the solutions are frequently corrective taxes to properly realign incentives.  Nordhaus found his market failure in carbon-dioxide emissions and the carbon tax is his remedy. Use this one clever trick to fix the climate!