ALL Quiet On The ‘Climate Emergency’ Front : Healthy Sea-Ice Levels At Both Poles

ALL Quiet On The ‘Climate Emergency’ Front : Healthy Sea-Ice Levels At Both Poles
Climatism » Feed / by Jamie Spry/

IN case you hadn’t noticed, the COVID19 crisis has been highly successful in drowning out the mainstream media’s go-to-weapon of mass fear and panic – ClimateChange™️.

PERHAPS the timing is fortunate as recent and prominent climate data hasn’t really held up as ammunition-worthy material in support of their “climate emergency” nightly narrative, or whatever the latest GretaThunberg™️ meme of the day requires.

TWO of the favoured metrics used by CC activists and sycophant mainstream media, in order to push their memes, are conditions applicable to the Arctic and Antarctica. Namely, sea-ice levels.

UNFORTUNATELY for climate ambulance chasers, sea-ice levels for the Arctic and Antarctica are tapping and well within the long-term average respectively. Completely at odds with ‘expert’ and mainstream media predictions and U.N. climate model forecasts.

ACCORDING to NOAA, Antarctic sea-ice coverage in March came in “near the 1981–2010 avg & ended a 41-month period of below-avg monthly values.” 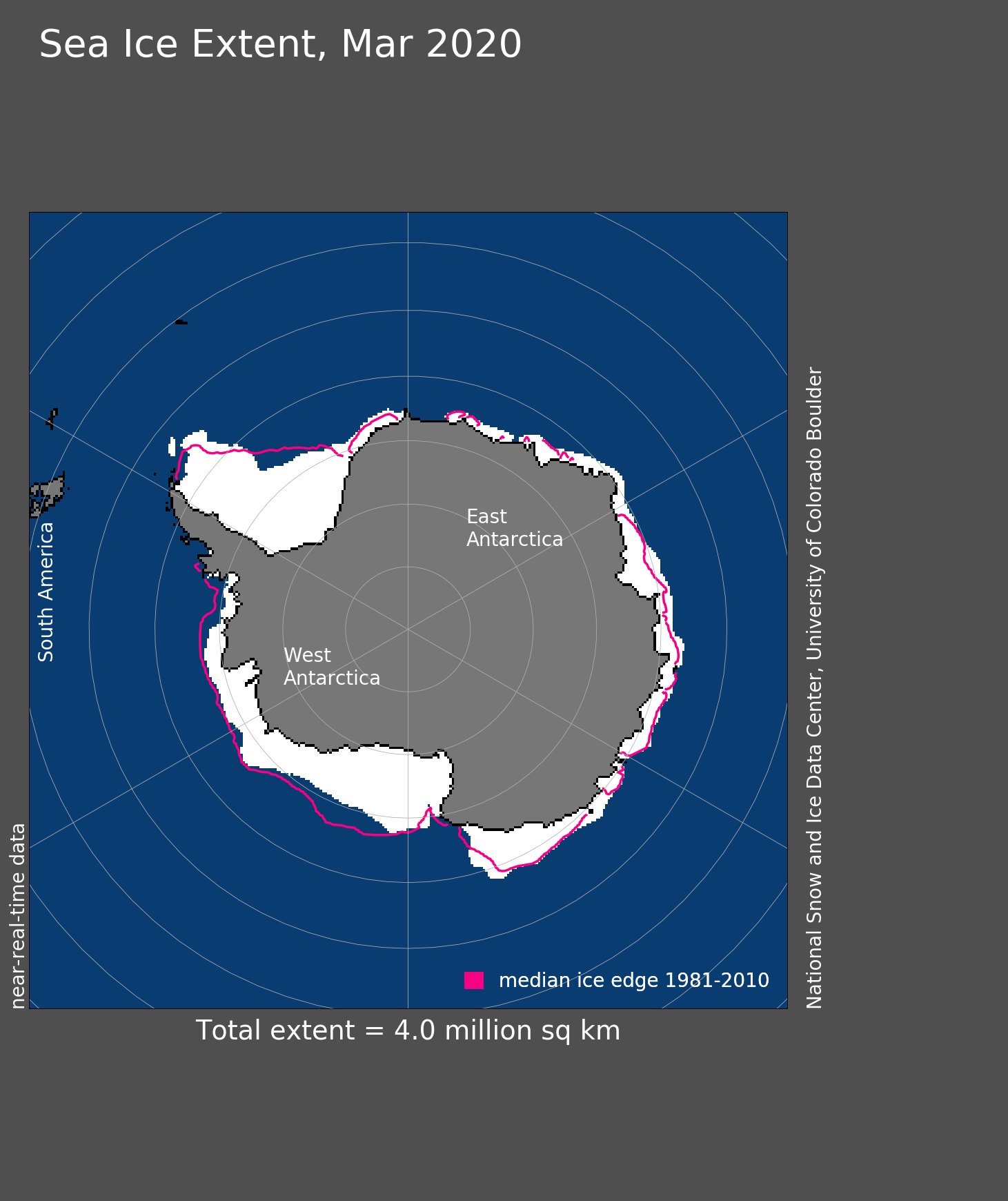 80 people are talking about this

THIS rebound time (41 months) matches nicely the time from the date when a significant portion of Antarctic sea-ice was blasted away by a “perfect storm of tropical, polar conditions not due to climate change” – Malte F. Stuecker et al

Record-low 2016 Antarctic sea ice was due to a ‘perfect storm’ of tropical, polar conditions – not ‘climate change’ | Climatism

NOTE the healthy rebound from 2016 to present…

ACCORDING to NOAA, “March 2020 #Arctic #SeaIce coverage was 11th smallest for March in the 42-year record” 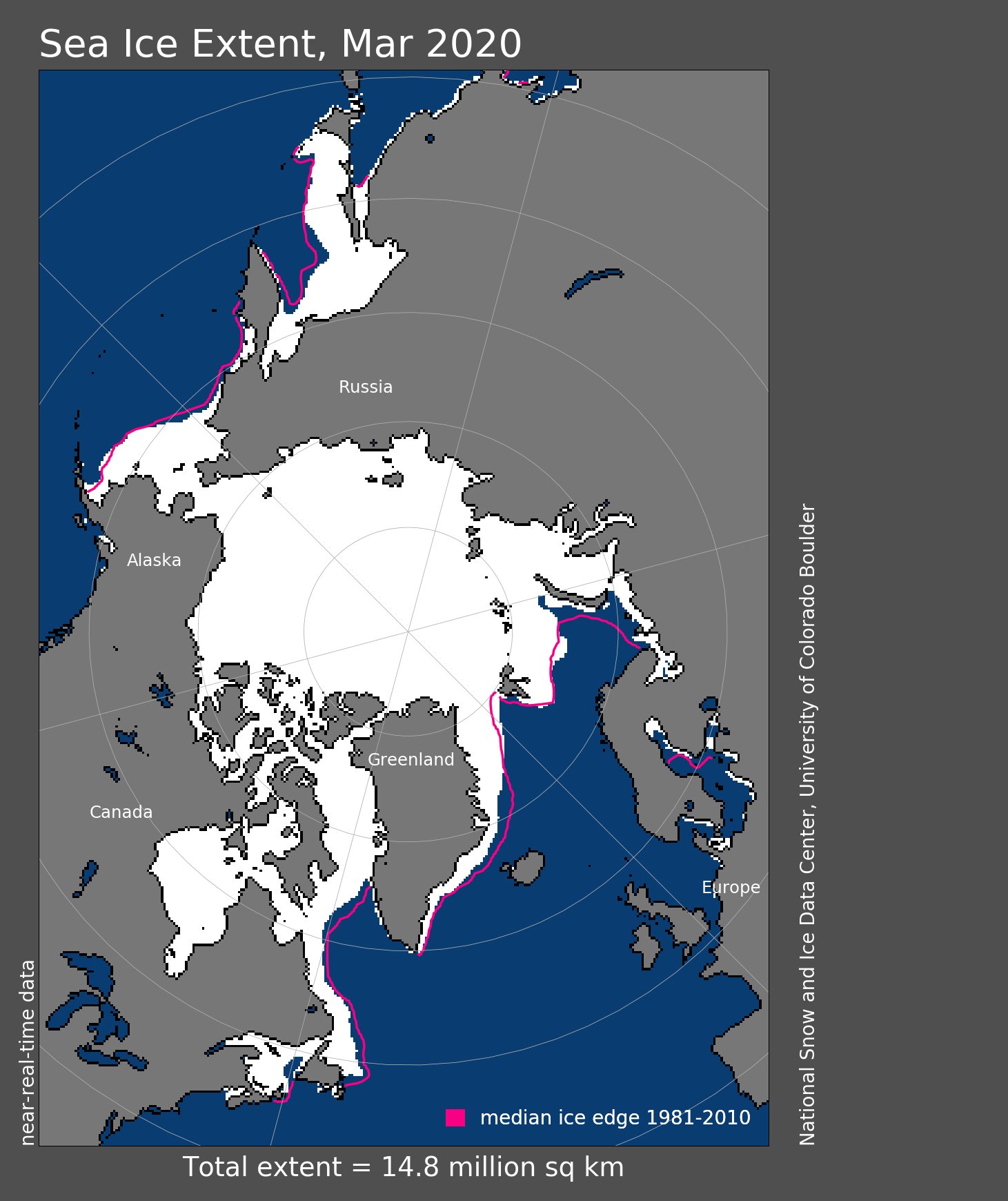 59 people are talking about this

NOTE the complete lack of Arctic melt since 2005. In fact, there has been a slight increase in sea-ice growth since 2005.

WHERE is the acknowledgment from NOAA that there has been *no* Arctic sea-ice melt, at all, since 2005?

PERHAPS I prefer a “glass half full” approach to climate data analysis, whereas NOAA prefers a “glass half empty” when assessing theirs?

NO doubt you, as a critical thinker, can work out why this is the case.

ANTARCTICA has always been a thorn in the side of ClimateChange™️. It is very much the ‘inconvenient’ pole, the naughty child, that has been gaining ice mass and cooling for decades, despite a 20 per cent increase in atmospheric CO2, and model predictions to the contrary.

THE Arctic, however, has been the veritable whipping-boy for the climate activist movement, as it has seen clear declines in sea-ice levels since the century-maximum of 1979.

BUT, hardly the declines that the mainstream media and ‘experts’ made us believe to be true, according to their dire and hyper-alarmist predictions.

HAVE they no shame? Or is their ClimateChange™️ ‘jihad’ too firmly entrenched for honest science and empirical data to exist, ever?