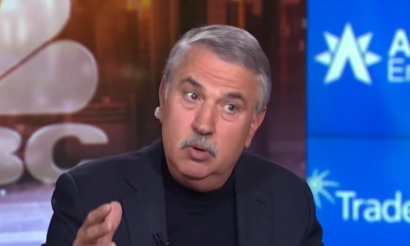 In an op-ed headlined “With the Coronavirus, It’s Again Trump vs. Mother Nature,” Friedman used a dubious comparison between Trump’s handling of the coronavirus and climate change as evidence he was “enamored with markets but ignorant of Mother Nature.” Friedman quipped (emphasis added): “[W]e have paid a steep, steep price for that [Trump’s ignorance to Mother Nature] — and will pay an even bigger price when it comes to climate change, if Trump remains in charge.”

Oddly, his only criticism of the Chinese government was that “China was reckless about importing and mixing ‘terrestrial wildlife’ — supposedly endowed with magical sexual and other powers — with regular meat and seafood in its wet markets.”

Friedman told readers to keep in mind “how much more destructive climate change could be for all of us.” He then suggested at there iths “one huge difference” between climate change and the virus: “Climate change doesn’t peak.”

Friedman also suggested that the virus spread in the U.S. “because Trump looked at the problem through the lens of the markets first and the science of natural systems second, if at all.”

Did Friedman consider what would happen if Trump just dropped his concern for the economy cold turkey? University College, London Chair in computational biology François Balloux outlined the risks in March on the UK’s economy if its government abandoned it:

Friedman’s outrageous comparison began with a cherry-picked list of events Friedman compiled beginning with Trump’s January 22, comments to a CNBC reporter that he wasn’t concerned then about a pandemic at that early point and ended March 30, 2020, when Trump repealed former President Barack Obama’s auto emission standards.

Friedman appears to have also attempted to play psychic by purporting to know Trump’s thinking with regard to how he handled dealing with the virus (emphasis added):

Early on, Trump clearly spent his days watching the markets and downplaying the virus’s potential for rapid spread. If the markets were doing well for investors, Trump thought it meant that he was doing well containing Mother Nature’s Covid-19 disease — one of many Darwinian engines she employs to mercilessly sort out the weak from the fit.

Friedman then warned to “not mess with Mother Nature. But that is exactly what Trump did initially with the coronavirus — and is trying to do still with climate change.” He later concluded: “Now that we have tasted Mother Nature’s wrath in the form of both Covid-19 and climate change, let’s get her on our side.”