This possibility is emblematic of sorry state of climate policy. John Kerry has proven he is totally ignorant of the basics of climate science. Nevertheless, while he ridicules those who know more, he is aided and abetted by the media.

In a widely covered speech in Jakarta in 2014, Kerry asserted that climate change is “the world’s most fearsome weapon of mass destruction.” He also went to some lengths to lay out the basics of climate science.

After invoking the requisite “97 percent of scientists” cliché, Kerry goes off script (or we can hope it was off script) to explain how simple it is to understand climate science: “But this is not tough. This is simple. Kids at the earliest age can understand this.” It is worth watching the video just to get a sense of the condescension and derision toward skeptics.

Here is his description of carbon dioxide as a greenhouse gas:

“Try and picture a very thin layer of gases – a quarter-inch, half an inch, somewhere in that vicinity – that’s how thick it is. It’s in our atmosphere. It’s way up there at the edge of the atmosphere.”

Don’t bother going outside to look for it. Kerry’s is an absolutely cockamamie description of greenhouse gasses in general and CO2 in particular. CO2 is not “way up there at the edge.” It is all through the atmosphere. It is not a quarter or half an inch thick—it is part of the many-miles thick atmosphere. It seems he may have been using talking points from the twenty-years-earlier debate on ozone. Ozone is mostly “way up there” and if isolated and compressed to right-down-here pressures would form a layer 3 mm thick. If so, Kerry confused an abstract description of ozone (O3) for the reality of CO2. More notable than his confusion is his confidence in his ignorance. He asserted that those who did not have his level of understanding were flat-Earthers with less comprehension than small children.

After misinforming the audience about the thin layer, way up there, he immediately adds: 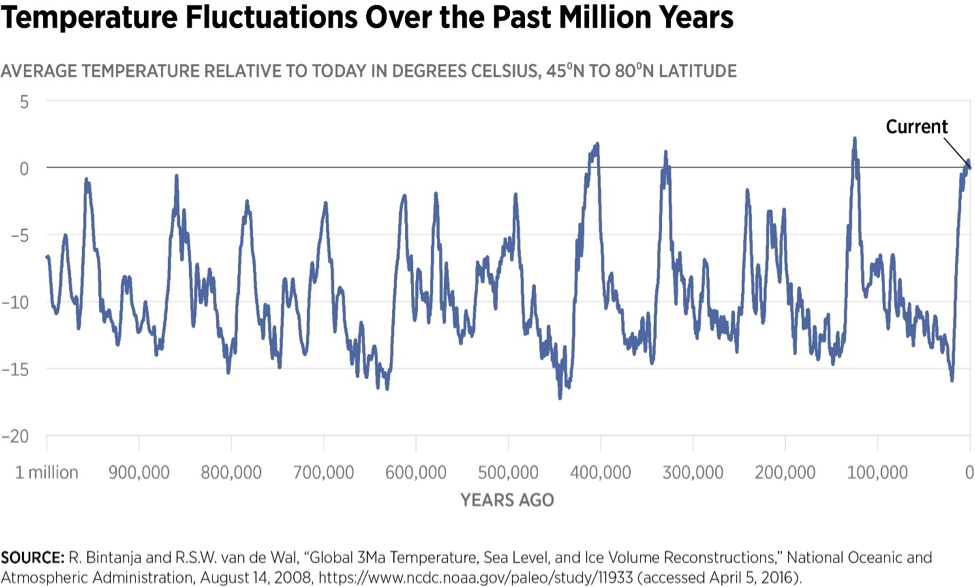 Those who disagree with Kerry’s clown-science are “a tiny minority of shoddy scientists… and extreme ideologues.” Everybody else, then, must think that CO2 is a half-inch layer “way up there at the edge of the atmosphere” and the Earth’s average temperature has been maintained for “millions of years.” So, get with the program, everybody, you don’t want to be in the loser group of shoddy scientists and ideologues.

These assertions were so ludicrous that the reporters had a field day pointing out these outrageous errors. Ha-ha, just joking. None of the major news organizations said anything about Kerry’s blatant misunderstanding and misrepresentation of climate science. Instead they focused on Kerry’s line about weapon of mass destruction and his equating climate skeptics to Flat-Earth Society members.

Googling “John Kerry climate weapon of mass destruction” generates over 1.4 million results with virtually every news organization covering that quote and not saying anything about “a very thin layer,” “way up there.”

Googling “John Kerry climate science” turns up nearly 8 million results. Judging from the first several pages of hits, they are primarily about a climate group he helped form in 2019 or about his interaction with MIT-educated engineer, Rep. Thomas Massie. Massie wondered what were Kerry’s scientific qualifications that allowed him to dismiss a climate advisory group put together in the Trump Administration. Kerry called it a “kangaroo committee.” The media coverage was sometimes de facto cheerleading for Kerry (here, for instance).

Some skeptics and bloggers pointed out Kerry’s Jakarta stupidity, but it got no coverage at the time. Bonus points for anybody who finds mainstream media coverage of his error. Put it in the “Comments” section, please.

What would the future for the Secretary of Climate look like? The media response when Kerry gave as embarrassing a description of greenhouse gases as is possible to give was total silence. Instead the media focused on soundbite-worthy, but unsubstantiated, quotes. It seems the media are either so unsure of fundamental science as to be easily fooled, or they are climate activists.

So, if Kerry (or anybody else) gets a cabinet-level, climate-change appointment in a new administration, we can be sure the Fourth Estate will provide no reality check on the First.