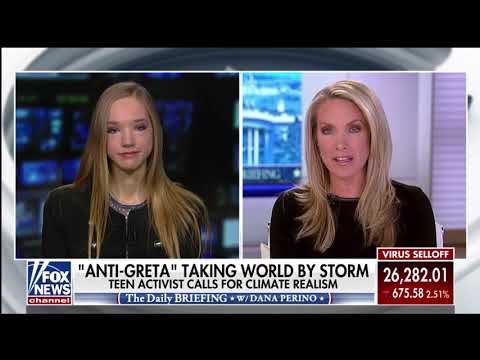 The Heartland Institute’s Naomi Seibt was a guest Thursday, February 27 on “The Daily Briefing with Dana Perino” on the Fox News Channel, the top-rated cable show in its time slot in the United States.

She was invited on the program to talk about her work as a “climate realist” in her native Germany, where climate panic has taken hold among her generation, and the speech she will give at CPAC 2020.

Said Naomi: “I hate to see so many young people panicking about climate change” when they haven’t done their own research on science.

“They don’t really know what they are talking about. They are so fearful about the future, and I want to give them back their hope.”

Dana Perino: So, pretty much everyone knows about Greta Thunberg by now, but you might also be reading about a fellow teenager making a name for herself in the political world, one who said to take the stage at CPAC. Let’s bring in Naomi Seibt. She’s a nineteen-year-old from Germany who’s willing to ask questions has earned her a spot at CPAC tomorrow. it’s good to have you here Naomi. So you have been hired by the Center for Climate and Environmental Policy and you have a just different view about climate. What is it about the current narrative that kind of drives you crazy?

Naomi Seibt: Well, it’s mostly that there is so much fearmongering going on about this entire climate change propaganda that is being put out there and I hate to see so many young people especially panicking about climate change, about the topic that they haven’t even done their research about because many people they claim to know about the science but they really don’t, and I tried approaching those young people in my own town and from all over the world, and most of them don’t really know what they are talking about in there just so fearful of us to come and I want to give them back their hope.

Dana Perino: How did you learn about climate change, climate science, and what you think could be done to try to tackle the problem?

Naomi Seibt: Well, I myself used to be a climate alarmist, if you will. And I only started looking into the topic at the beginning of 2019, so last year, and after a while I just became really fascinated with the topic because I’ve always loved science myself and I took part in many science competitions at school and quite successfully so, and so this was, this was really a passion of mine, to look deeper into this topic. And I watched many a presentation, speeches by scientists, professors from all over the world, and this is how I really got into all of this. And I also like public speaking and talking about different political issues on my YouTube channel, for example. Yeah, that’s how it all started.

Dana Perino: So how, so what is your goal? You are going to be a CPAC, you’re going to have a chance to talk there. What about this panic do you, back in your home town, do you find your message is received well or do you not have a lot of friends out there?

Naomi Seibt: Oh, that’s very difficult indeed, especially in my own hometown, because the green party’s very strong there, and many young people go through #FridaysForFuture protest every single week and I gave speech that 2 weeks ago and there were thousands of people around my age protesting outside against this event, and that is very strange feeling, especially when you’re labeled a climate denier, which is such a heavy term.

Dana Perino: Because you, you are not a climate denier. You think climate change is real.

Naomi Seibt: I absolutely believe that climate change is real. You shouldn’t ask a question, is climate change real, because climate change has always been real. The climate has been changing for millions and billions of years, but what you should actually be asking is are humans actually destroying the planet with man-made CO2 emissions?

Dana Perino: And your position on that is what?

Naomi Seibt: My position on that is no, CO2 emissions are not actually harmful to the planet, because, if you want I can talk about it.

Dana Perino: No, that’s okay we don’t have enough time to get into all of it. I just wanted to make sure, it’s not that you think that climate change is not real, but you believe that humans have no contribution to climate change.

Naomi Seibt: They might contribute slightly, but I think it’s so insignificant that we shouldn’t focus on that, and especially that we should not rush to solutions that are really not sustainable in the long-term. Yeah.

Dana Perino: I hear you. Good luck at your speech, Naomi Seibt. Thank you so much for being on.

Naomi Seibt: Thank you so much for having me.