Authoritarian Left: Tom Steyer Says As President He Will Tell Companies What Cars They Can Build And How They Can Generate Electricity

Authoritarian Left: Tom Steyer Says As President He Will Tell Companies What Cars They Can Build And How They Can Generate Electricity
The Daily Wire / by Ashe Schow / 2d 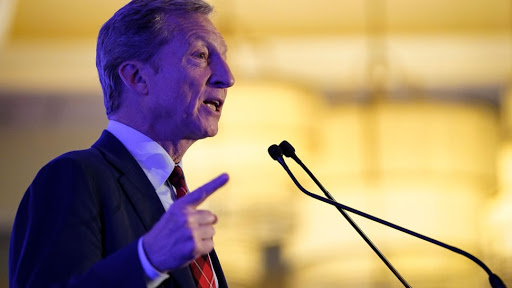 Billionaire Tom Steyer is currently in second-to-last place in the 2020 Democratic primary, but on Monday night he made a proposal he must think will help his campaign: Essentially a government takeover of the car and energy sectors.

During a televised townhall event hosted by CNN’s Chris Cuomo, Steyer suggested he will take an authoritarian approach to climate change if he’s elected president.

“I am the only person running for president who will say that climate is his or her number one priority. The only one. Go ask them. The only one,” Steyer told the CNN audience. “And I have said that I will declare a state of emergency on climate on the first day of my presidency and I will use the Executive emergency powers of the presidency to tell companies how they can generate electricity, what kind of cars they can build and on what schedule, what kind of buildings we’re gonna have, how we’re gonna use our public lands, how the government – which is the biggest buyer of fossil fuels in the world – is gonna move to clean energy.”

Cuomo actually pushed back, saying Steyer had said previously he didn’t want the government running everything but was now saying something different when it comes to climate. He asked Steyer how the billionaire “reconciled” those two points.

“What I’m talking about is the government setting the rules of the road for corporations,” Steyer responded. “I don’t want to buy the car company, I’m not talking about taking over the electricity system, I’m talking about saying ‘These are the rules that serve the American people.’ That’s what the government does, Chris. We represent the American people’s interests without any compromise, without any conflict, and that’s what I’m doing here. We have to deal with this on a crisis basis.”

That’s not really different, given his first statement about how precisely he would be micromanaging these companies. Having the government set the rules of the road down to telling companies exactly what they can do would require extensive new regulations and completely reinvent the American economy, which Steyer seems to be fine with.

He went on to say that climate change isn’t necessarily a science issue, but an environmental-justice issue.

“The reasons that I’ve been successful in climate, is because I start with environmental justice. You want to deal with climate? People think it is a science issue. It’s a human issue with a huge racial overtone. The places in this country where people can’t breathe without getting asthma, can’t drink the water are black and brown communities,” Steyer said.

SC voter says she is ‘terrified” of climate change.

STEYER: “I will use the Executive emergency powers of the presidency to tell companies how they can generate electricity, what kind of cars they can build, what kind of buildings we’re gonna have…”

“This is a huge boon to the United States. We need to rebuild this country in a climate-smart way. This is four-and-a-half million good-paying union jobs everywhere,” Steyer said on Monday. “So, when people say, ‘oh, we can’t afford to do it,’ we will be better paid, richer, we’ll grow faster, at the same time that we build millions of affordable housing units because we need to do that, rebuild roads and bridges, rebuild the grid – this is the biggest job program in American history [and] at good wages.”

As a reminder, Warren claimed at the debate in Las Vegas, Nevada on February 19 that “There’s an upcoming $27 trillion market worldwide for green. And much of what is needed has not yet been invented.” She then claimed that would translate to “a million new manufacturing jobs.”