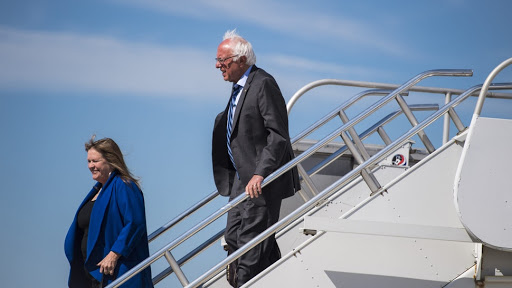 Sen. Bernie Sanders (I-VT) is campaigning to be the 2020 Democratic presidential nominee on a progressive, socialist agenda, but his campaign’s spending is more in line with the “one percent” than the working class.

Sanders’ Federal Election Commission filings reveal that the “Democratic socialist” shelled out $1,199,579 to Apollo Jets, LLC, a “luxury private jet charter service,” per the Free Beacon, even though his own campaign views private air travel as one of the top contributors to climate change (and as a luxury of the rich, to boot). The campaign paid an additional $23,941 to a Virginia-based private pilot service.

“An analysis of private jet spending in filings from other top candidates found that Elizabeth Warren’s campaign spent $720,518 and Pete Buttigieg’s campaign spent $323,518,” the Free Beacon reports. “Michael Bloomberg, who pumped a whopping $200 million of his personal fortune into his campaign’s opening weeks, spent about $646,000 on private jet travel, about half of what Sanders spent.”

Apollo Jets does not advertise prices on its website, instead asking potential clients to contact them personally to get a quote, making it difficult to quantify how Sanders’ campaign spent the money. Presumably, though, the campaign has been shuttling Sanders back and forth from Washington, D.C., to campaign stops in Iowa, New Hampshire, South Carolina, and other early primary states.

Recently, in the first quarter of 2020, the campaign has “stepped up” its use of private jets; as the Daily Wire reported in January, Sanders’ campaign has been using the same private jet service, Apollo Jets, to fly Sanders from D.C., where he was attending President Donald Trump’s impeachment trial as required by the Constitution, to campaign events in Iowa.

Although Sanders is a champion of public transporation and a critic of air travel — his website lists the “transportation industry” as a chief contributor to climate change and Sanders, himself, is a proponent of the Green New Deal, which would eliminate domestic air travel altogether — he’s a bigger fan of private jets. Even before he was officially campaigning for president, he was spending around $300,000 per quarter on private air travel. And back in 2016, when Sanders was (begrudgingly) stumping for then-Democratic presidential nominee, Hillary Clinton, he reportedly demanded a private jet to ferry him and his staff to trail appearances as a condition of his endorsement, per Clinton staffers.

Sanders’ campaign, at least, has addressed the climate change issue, telling the Free Beacon that they’ve been purchasing “carbon offsets” from NativeEnergy — and, indeed, the FEC reports do show evidence that Sanders spent around $40,000 on emissions credits to neutralize Sanders’ use of fossil fuels.

Of course, as teenaged climate activst Greta Thunberg has pointed out, “net zero” emissions are still emissions. And, according to the European Commission on climate change, the “vast majority” of climate exchange programs fail to actually reduce emissions. The group concluded, in a report issued this past April, “that buying and selling emissions credits for overseas projects should be limited to a select list that meet rigorous standards, and used only as part of a transition to more effective policies for mitigating greenhouse gas emissions,” per Inside Climate News.