Delingpole: Environmentalists Made Australia’s Bush Fires Worse – ‘There is zero evidence of any change in climatic conditions that might have increased the likelihood or severity of these bush fires’

Australia is on fire, at least 17 people have been killed, hundreds of homes have been destroyed, and an estimated half-billion animals — both livestock and wildlife — have been burned alive. The area burned in the bush fires so far is considerably bigger than the area burned either in last year’s Amazon rainforest fires or the fires in California.
The stories and images that have emerged from Australia are vivid and dramatic…

As Paul Homewood pointed out last month, there has been no significant long-term decrease in rainfall or increase in temperatures in the affected regions.

Yes, it has been dry in New South Wales (where most of the worst fires are), but there have been several years, especially pre-1960, when it was drier:

First, let’s look at rainfall. All the data and graphs that follows are from the Australian BOM: 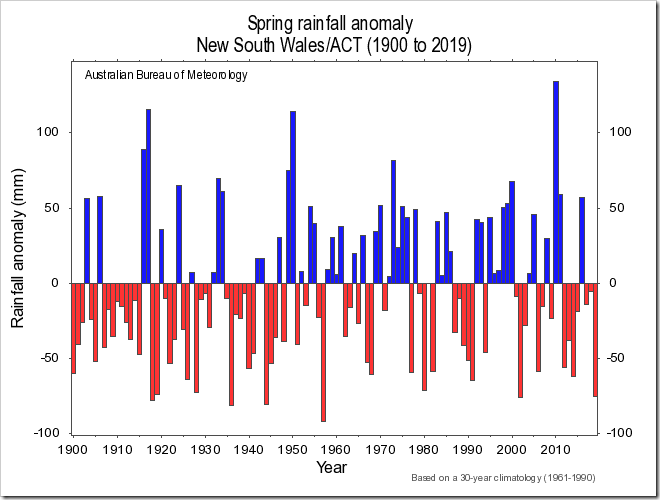 As we can see, rainfall in NSW over the last three months is well below average, but no worse than several previous years on record.

The same applies to temperature. Yes, this has been a hot spring in New South Wales. But there have been times when it has been much hotter — making a nonsense of all stories in the Australian media about temperatures being the hottest evah:

Neither is the monthly average of 38.0C a record high. The three years from 1899 to 1901 all saw average December mean maximum temperatures well above 38.0C.

So, to be clear, there is zero evidence of any change in climatic conditions that might have increased the likelihood or severity of these bush fires. This is not — repeat NOT — a man-made climate change story, and anyone who claims otherwise is either a gullible idiot or a lying charlatan.

There is, nonetheless, good reason to believe that the stupidity and irresponsibility of man is at least partly to blame for this disaster — just not quite in the way that the left-liberal MSM and the green wankerati would have you believe.

Man-made culprit #1: all the firebugs who have been deliberately starting fires in New South Wales, Queensland, and elsewhere. You won’t be surprised that their involvement has had very little coverage in the left-liberal MSM.

Figures obtained by AAP reveal 98 people – 31 adults and 67 juveniles – have been dealt with by Queensland police for deliberately setting fires.

A 16-year-old boy was found to have started a fire that razed 14 homes in central Queensland and dealt with under the state’s Youth Justice Act.

Two more teens, 14 and 15, were charged with endangering property by fire over a blaze that destroyed two homes and forced hundreds to flee.

Man-made culprit #2: well-meaning idiots who don’t understand that unless you manage forested areas with controlled burns, you’re going to end up with out-of-control wildfires.

Jo Nova has a damning story about locals in East Gippsland in the state of Victoria who successfully stopped a planned controlled burn at Nowa Nowa. Two of them were pictured holding signs saying, “Spring burns kill baby birds alive” and “Stop burning nesting birds”.

One grandmother was quoted as saying, “I’m more worried about climate change, and the impact the burns are having. I’m worried for my grandchildren.”

ABC — the excruciatingly left-wing Australian Broadcasting Company, so woke it makes the BBC and CNN look like Fox News — reported on the protests with some enthusiasm last September but has since mysteriously decided to delete the story from Facebook.

The people most to blame for the Australian bush fires are the greens. Just like in California, their tree-hugging Gaia worship blinded them to the reality that forests need regular clearance and maintenance if they are not to become a major fire hazard. Some Australian politicians on the right side of the argument are well aware of this:

“The problems we have got have been created by the Greens,” Mr [Barnaby] Joyce told The Australian.

“We haven’t had the capacity to easily access (hazard) reduction burns because of all of the paperwork that is part of green policy.

“We don’t have access to dams because they have been decommissioned on national parks because of green policy. We have trees that have fallen over vehicles and block roads, so people cannot either get access to fight a fire or to get away from fires. And we can’t knock over the trees because of Greens policy.

Yet still, in large parts of Australia, it remains illegal to remove trees from your land even in order to create fire breaks and protect your property — despite the obvious risk this ban creates to homeowners living in potential bush-fire zones. Trees have been designated a ‘carbon sink’, which supposedly offset Australia’s CO2 emissions.

This issue has long been known in Australia, as the story below shows:

Of course it easier for Greenies to blame ‘Climate Change’ than their own bureaucratic nonsense.
A volunteer firefighter was fined $100,000 & treated as criminal for creating a firebreak on his property.
His house was only one not burnt down in his area.https://www.dailymail.co.uk/news/article-7678955/Black-Saturday-survivor-fined-cutting-trees-supports-hazard-reduction.html …

Liam Sheahan cleared trees and shrub within 100 metres of his home in the hills of central Victoria in 2002 to create a firebreak in case of a blaze. His was the only house to survive Black Saturday.