'With the closing of the second decade of the 21st Century, much to reflect upon how climate change alarmism has itself alarmingly morphed into something much more dangerous, visceral, urgent, ideologically driven and immediate as regards public perception and societal impact.'

The End of a Decade When Climate Alarmism Tipped Abruptly Into Climate Crisis Hysteria
By Jaime Jessop, Climate Scepticism, 28 December 2019

In the final days of 2019, there is much to reflect upon events of the past year and, with the closing of the second decade of the 21st Century, much to reflect upon how climate change alarmism has itself alarmingly morphed into something much more dangerous, visceral, urgent, ideologically driven and immediate as regards public perception and societal impact.

A decade during which global warming faded into obscurity (on account of the fact that there wasn’t any from 1998-2013) to be replaced almost universally by the more politically correct term of ‘climate change’, which has itself now been largely displaced in activist circles and the media by the terms ‘climate emergency’ and ‘climate crisis’. Ironically so, because, bereft of an actual climate crisis, alarmist scientists and activists have proceeded to invent one, linguistically, as in the case of the Guardian’s newly introduced style guide and by co-opting extreme weather events and their impacts into the general narrative.

In the absence also of any observably catastrophic global rise in temperature throughout the 21st century (which not even ‘pause-busting’ adjustments to temperature data could conjure up), alarmists have turned to inventing imminent future catastrophes via the invocation of highly speculative ‘tipping points’ which supposedly will be ‘triggered’ at imaginary and entirely ad hoc global warming thresholds (1.5C, 2C, 3C etc. relative to pre-industrial baseline). They have also increasingly employed the highly unrealistic ‘business as usual’ scenario RCP8.5 to supercharge their global warming projections in order to manufacture climate alarmist narratives in the media, a strategy which only in the last couple of months has started to be seriously questioned. Roger Pielke Jr has recently been at the vanguard of the movement to expose the misuse of this nightmarishly unrealistic scenario as ‘business as usual’: 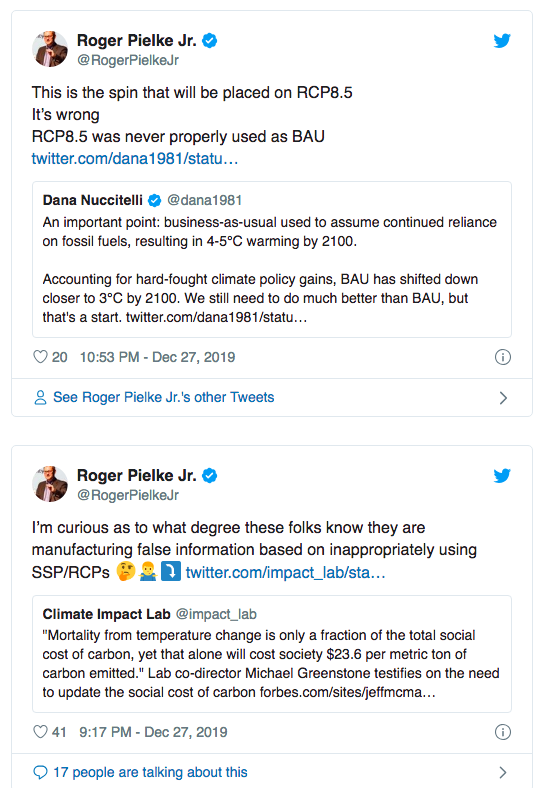 The decade started off with the climate science community desperately trying to salvage some shred of credibility from the fallout of climategate. In the event, they never managed – they just airbrushed over the warts and manufactured official-looking false exonerations of their appalling behaviour, bordering on scientific fraud in some cases. Having done this, they carried on regardless – ‘business as usual’ you might say. With the RCP8.5 debacle, due to be now carried over (with interest) into the ‘new, improved’ SSP/CMIP6 fantasy couplings, one can see that nothing has changed. Bad practice and dodgy science are still rewarded with lavish grants if the message remains still that ‘It’s time to panic!’.

Judith Curry has written an excellent push back article to the lukewarm attempt by Wallace-Wells, among others, to dial down the alarmist hype in the light of the RCP8.5 criticisms, whilst still maintaining the necessary ‘scary’ projections of future warming.

1.0 C warming for the remainder of the 21st century seems pretty benign. But if you add the ~1.0 C warming since 1890, then we are at 2 C – ‘dangerous’ 2C, and then 1.5C, are the touted values of ‘dangerous’ climate change. Some context on ‘dangerous’, and some different perspectives in these previous blog posts:

Simply put, in terms of ‘dangerous’ we are looking at extreme weather events, sea level rise and species extinction. I’ve written numerous posts on all of the above, won’t rehash here, other than to point you to the recent IPCC Special Report on Oceans, Cryosphere and Climate, since sea level rise is one issue that is very directly and monotonically linked to warming. Their main conclusion regarding sea level rise:

The issue of 2 C as ‘dangerous’ is tied to concerns about tipping points, and massive melt of ice sheets that were observed in previous interglacials at comparable temperature.

As the third decade of the 21st Century dawns and a spotless Cold Sun rises ever higher, we’re going to see a lot more use of scary emissions scenarios coupled with climate models having ridiculously high sensitivities to CO2 to ‘scientifically’ justify urgent action on climate change. We are going to see a lot more talk of ‘tipping points’ – even at half a degree extra warming from the present – and we are going to be regaled with continuing scare stories about extreme weather which will be formally attibuted to global warming using even more unrealistic CMIP6 models.