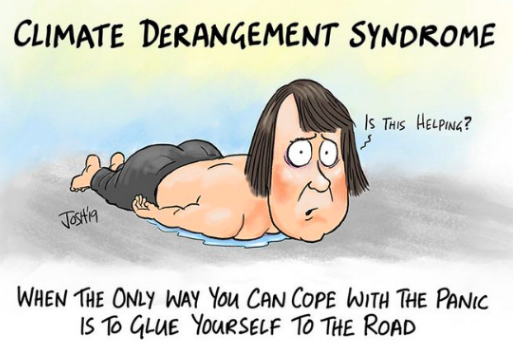 2019 was the most extraordinary year of green bullshit yet. Despite the planet being a wealthier, healthier and safer place than it was when fears of global warming first appeared on the political agenda in the 1980s – and despite the failure of more than half a century of green prognostications – crazy and destructive green ideas still dominate politics.

In 2019, green doublespeak went mainstream. Harry and Meghan had intended to ‘eco-signal’ by warning us about climate change. At the same time, they were hopping on private jets to stay in luxury villas. Despite attempts by some celebrities to defend the royal couple from criticism, newspapers across the world pointed out that actions speak louder than words. What Harry and Meghan’s royal hypocrisy showed was that elite environmentalism is less about saving the planet than about telling people how to live and to know their place.

Greta and the school strikes

The only truly new thing that has emerged over the past year or so has been the phenomenon of Greta Thunberg and her school-strike movement. For years, the ‘green blob’ network of campaigning organisations, corporations, academics and UN agencies has fantasised about mobilising the young as a political force. After pumping billions of children full of green propaganda, a climate avatar has arrived in the form of the Swedish truant-cum-activist.

There could be no doubting the sincerity of the teen who bore the emotional scars inflicted on her by the movement that she was to lead – she had been so traumatised by green propaganda that she had not spoken, not eaten and had refused to go to school. Environmentalism is nothing if not a cult of self-harm.

Political, cultural and religious leaders fell over themselves to be seen being scolded by the child. Unlike Harry and Meghan, Greta refused to fly. Instead of private jets, European royalty, millionaires and superstars loaned her their sailing yachts and Teslas. To keep her own personal carbon footprint down, sailing crews and her entourage had to fly across the Atlantic.

Politicians and campaigning organisations may have found it useful to hide their political ambitions behind children. But to many people, the emotional manipulation of impressionable minds is unconscionable. It has now emerged that the false stories that many of the children have fallen victim to – such as the claims that charismatic creatures like walruses and polar bears face extinction or that the world’s rainforests face imminent collapse – are distressing young children and causing real harm.

The school strikes may continue next year but, at some point, parents will start to demand that organisations which have promulgated the lies that are damaging their children are held to account.

Extinction Rebellion (XR) is perhaps the living embodiment of green bullshit. It is hard to add much to the volumes of criticism of XR that already exists: it is a movement of bizarre, narcissistic, anti-democratic, upper-middle-class, regressive zealots. XR has no better grasp of the world than their child co-protesters.