Greta Denies She Is ‘Political’, Gets Brutal Reminder; Threatens To Put Politicians ‘Against The Wall’

Greta Denies She Is ‘Political’, Gets Brutal Reminder; Threatens To Put Politicians ‘Against The Wall’
The Daily Wire / by Ryan Saavedra / 1d 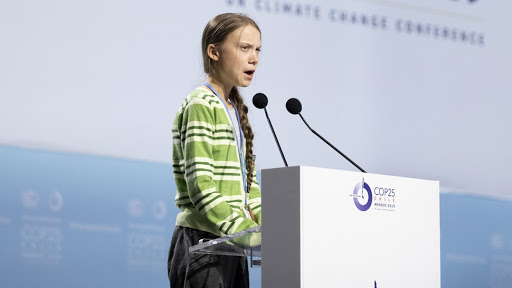 Far-left climate alarmist Greta Thunberg threatened to put world leaders “against the wall” last week over her claims that they were not trying to save the planet. She made the comment while also proclaiming last week that she was not “political” — a claim that was contested by many online.

“I’m sometimes called ‘political’. But I’ve never supported any political party, politician or ideology. I communicate the science and the risks of failing to act on it. And the fact that the politics needed don’t exist today, neither to the right, left nor center,” Thunberg claimed in a pair of tweets. “If anyone thinks that what I and the science are saying is advocating for a political view – then that says more about that person than about me. That being said – some are certainly failing more than others.”

If anyone thinks that what I and the science are saying is advocating for a political view – then that says more about that person than about me.
That being said – some are certainly failing more than others.

Human Events Managing Editor Ian Miles Cheong highlighted some of Thunberg’s meetings with political leaders, which showed that she only met with leftist leaders.

In one tweet, Cheong highlighted Thunberg’s meeting with former Democrat President Barack Obama, a meeting in which Obama told her, “You and me, we’re a team.”

According to CNN: “Before the two fist-bumped, Obama said to Thunberg: ‘You and me, we’re a team.'” pic.twitter.com/SzIfUOlCqj

It’s worth noting that in her meeting with Ocasio-Cortez, which was published in The Guardian as a back-and-forth dialogue, Thunberg dispelled any notion that she is not political and that people are using her.

“The most common criticism I get is that I’m being manipulated and you shouldn’t use children in political ways, because that is abuse, and I can’t think for myself and so on,” Thunberg said. “And I think that is so annoying! I’m also allowed to have a say – why shouldn’t I be able to form my own opinion and try to change people’s minds?”

Another tweet highlighted Thunberg meeting fellow climate alarmist Al Gore, a failed Democrat presidential candidate, whom she said it was an “honor” to meet because he was a “true pioneer.”

Gore is a well-documented hypocrite when it comes to the climate. While he warns of impending doom that does not happen, he flies around the world on private planes and lives in a home that devours 34 times moreelectricity than an average home in the U.S.

Greta says it was an “honor” to meet Al Gore, praises him as a “true pioneer.” pic.twitter.com/ZAQdX9wpjO

Cheong also noted a t-shirt Thunberg wore earlier in the year that drew significant controversy because it appears to promote Antifa, an extremist left-wing group that embraces the use of violence to silence those with opposing views.

Is this an Antifa t-shirt? Sure looks like it. pic.twitter.com/tCVMKdlLNe

However, Thunberg eventually denounced the shirt, writing on Twitter: “Yesterday I posted a photo wearing a borrowed T-shirt that says I’m against fascism. That T-shirt can apparently to some be linked to a violent movement. I don’t support any form of violence and to avoid misunderstandings I’ve deleted the post. And of course I am against fascism.”

Late last week, Thunberg, at a climate rally, said that she would “put” world leaders that did not promote her climate extremism “against the wall.”

Not sure these children are a future anyone should want pic.twitter.com/UhVSgtkhvR

Thunberg responded to her controversial remarks by blaming it on her “Swenglish,” claiming that she was only inferring that she wanted to hold them accountable.

Thunberg’s remarks were actually tame compared to some of her prior statements, including comments she made in an op-ed earlier this month in which she said that she would promote “strikes, protests, and other actions” and would “become louder and louder” until leaders did what she thought was necessary.

In a meltdown speech at the United Nations earlier this year, Thunberg said of world leaders, “There will not be any solutions or plans presented in line with these figures here today because these numbers are too uncomfortable and you are still not mature enough to tell it like it is. You are failing us but the young people are starting to understand your betrayal. The eyes of all future generations are upon you and if you choose to fail us I say we will never forgive you. We will not let you get away with this. Right here, right now, is where we draw the line the world is waking up and change is coming whether you like it or not.”