Is the Nobel Prize next!? Greta Thunberg is Time’s 2019 ‘Person of the Year’ Time Mag claim: ‘Thunberg repeats the unassailable science: Oceans will rise. Cities will flood. Millions of people will suffer’

"She became the biggest voice on the biggest issue facing the planet this year, coming from essentially nowhere to lead a worldwide movement," Time editor-in-chief Edward Felsenthal told "TODAY," adding that Thunberg is the magazine's youngest choice ever to be named Person of the Year. 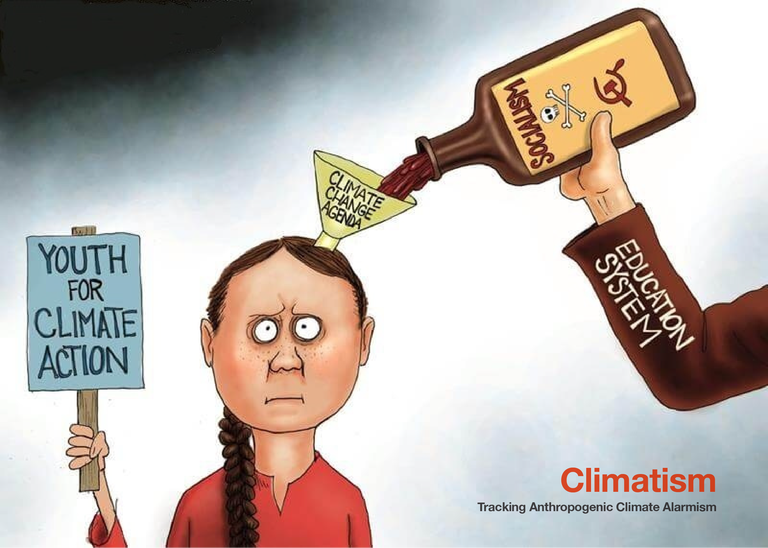 In the 16 months since, she has addressed heads of state at the U.N., met with the Pope, sparred with the President of the United States and inspired 4 million people to join the global climate strike on September 20, 2019, in what was the largest climate demonstration in human history. Her image has been celebrated in murals and Halloween costumes, and her name has been attached to everything from bike shares to beetles. Margaret Atwood compared her to Joan of Arc. After noticing a hundredfold increase in its usage, lexicographers at Collins Dictionary named Thunberg’s pioneering idea, climate strike, the word of the year.

Climate activism cures depression!? “Learning about climate change triggered my depression in the first place,” she says. “But it was also what got me out of my depression, because there were things I could do to improve the situation. I don’t have time to be depressed anymore.” Her father said that after she began striking, it was as if she “came back to life.”

Greta Thunberg, the soft-spoken Swedish teen who became a global conscience for climate change and environmental activism, has been named Time’s Magazine’s Person of the Year for 2019.

The magazine announced 16-year old Thunberg as its choice Wednesday exclusively on “TODAY.”

“She became the biggest voice on the biggest issue facing the planet this year, coming from essentially nowhere to lead a worldwide movement,” Time editor-in-chief Edward Felsenthal told “TODAY,” adding that Thunberg is the magazine’s youngest choice ever to be named Person of the Year.

Thunberg quickly bloomed into one of the world’s most notable and youngest climate change activists, sparking a collective movement to fight climate change after protesting alone outside the Swedish parliament during school hours on Fridays when she was 15. The teen held up a now universally recognized hand-painted sign that read “skolstrejk för klimatet,” which translates to “School strike for the Climate.”

BY CHARLOTTE ALTER, SUYIN HAYNES AND JUSTIN WORLANDPHOTOGRAPHS BY EVGENIA ARBUGAEVA FOR TIME
Greta Thunberg sits in silence in the cabin of the boat that will take her across the Atlantic Ocean. Inside, there’s a cow skull hanging on the wall, a faded globe, a child’s yellow raincoat. Outside, it’s a tempest: rain pelts the boat, ice coats the decks, and the sea batters the vessel that will take this slight girl, her father and a few companions from Virginia to Portugal. For a moment, it’s as if Thunberg were the eye of a hurricane, a pool of resolve at the center of swirling chaos. In here, she speaks quietly. Out there, the entire natural world seems to amplify her small voice, screaming along with her.“We can’t just continue living as if there was no tomorrow, because there is a tomorrow,” she says, tugging on the sleeve of her blue sweatshirt. “That is all we are saying.”It’s a simple truth, delivered by a teenage girl in a fateful moment. The sailboat, La Vagabonde, will shepherd Thunberg to the Port of Lisbon, and from there she will travel to Madrid, where the United Nations is hosting this year’s climate conference. It is the last such summit before nations commit to new plans to meet a major deadline set by the Paris Agreement. Unless they agree on transformative action to reduce greenhouse gas emissions, the world’s temperature rise since the Industrial Revolution will hit the 1.5°C mark—an eventuality that scientists warn will expose some 350 million additional people to drought and push roughly 120 million people into extreme poverty by 2030. For every fraction of a degree that temperatures increase, these problems will worsen. This is not fearmongering; this is science. For decades, researchers and activists have struggled to get world leaders to take the climate threat seriously. But this year, an unlikely teenager somehow got the world’s attention.