Analysis: ‘Greenland ice sheet isn’t melting any faster on average now than it was 15 years ago’ 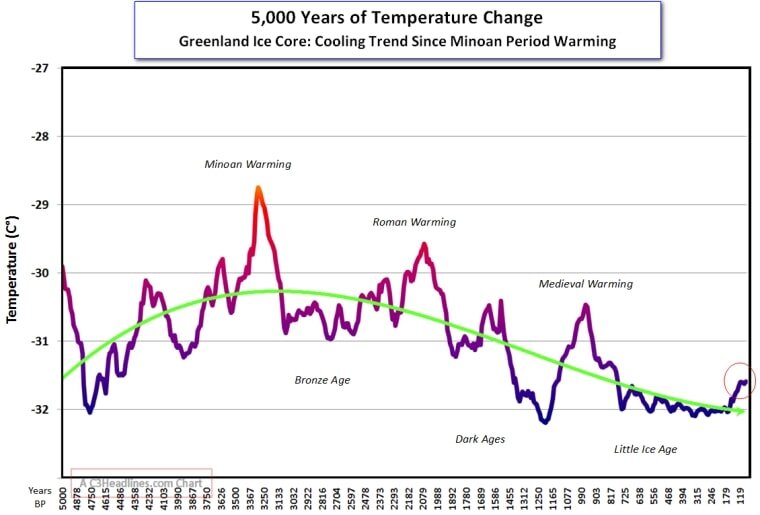 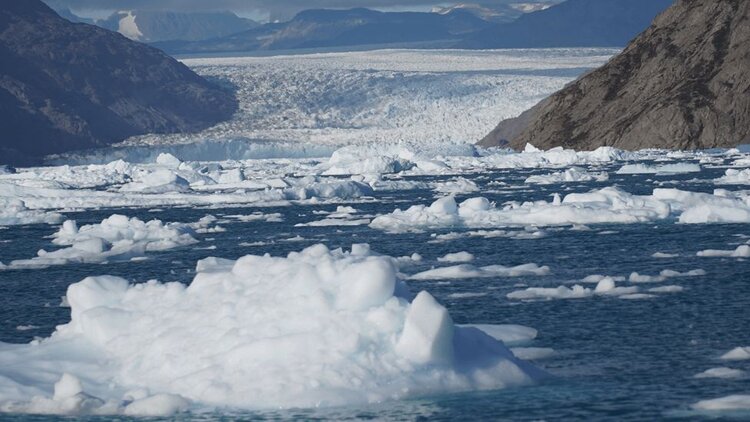 When Greenland’s ice sheet lost an estimated 11.3 billion tonnes (12.5 billion tons) of ice on a single warm day this August, following back-to-back heat waves in June and July in western Europe, the climate doomsday machine went into overdrive. Predictions abounded of ever-accelerating melting of both Greenland and Antarctic ice sheets, and the imminent drowning of cities such as London and Miami by rising seas.

But all this hype is unnecessary fear-mongering. As discussed in the previous post, the massive Antarctic ice sheet may not be melting at all as the world warms. And the much smaller Greenland ice sheet isn’t melting any faster on average now than it was 15 years ago. While this year’s summer melt was above average, it was no more than seen seven years before, in 2012.

Melting takes place only during the short Greenland summer, the meltwater running over the ice sheet surface into the ocean, as well as funneling its way down through thick glaciers, helping speed up their flow toward the sea. Although some of the ice lost in summer is normally ice gained over the long winter from the accumulation of compacted snow, last winter’s low snowfall quickly disappeared this year in an early start to the melt season. 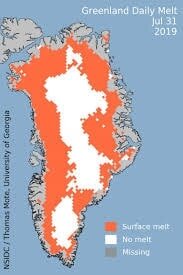 The figure to the left shows that at the peak of the 2019 event, over 60% of the ice sheet surface melted; on July 30 and 31, NOAA (the U.S. National Oceanic and Atmospheric Administration) reported that even the very highest point of the ice sheet liquefied briefly – a rare occurrence. The ice sheet, 2-3 km (6,600-9,800 feet) thick, consists of layers of compressed snow built up over at least hundreds of thousands of years. In addition to summer melting, the sheet loses ice by calving of icebergs at its edges.

The figure below depicts the daily variation, over a full year, of the estimated mass of ice in the Greenland ice sheet, relative to its average value from 1981 to 2010. The loss of ice during the summer months of June, July and August is clearly visible, the biggest recent losses having occurred in 2012 and 2019. 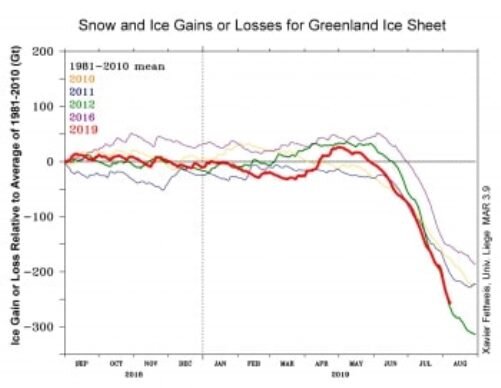 So, while the average annual loss of 258 billion tonnes (284 billion tons) between 2002 and 2016 is a big jump from the average 75 billion tonnes (83 billion tons) of ice lost yearly during the 20th century, it appears that the Greenland ice sheet has at least stabilized since 2002. The 21st-century increase in summer melt rate may arise partly from dominance of the negative phase of the natural North Atlantic Oscillation since about 2000.

Little known about Greenland is that the ice sheet was smaller than it is today over most of the period since the end of the last ice age. During the long interglacial epoch, as human civilization developed and thrived, there were several periods when it was warmer on average in Greenland than at present, as illustrated in the next figure. This has been deduced by analyzing ice cores extracted from the Greenland ice sheet; the cores carry a record of past temperatures and atmospheric composition.

One of the warm spells was the Medieval Warm Period, an era when Scandinavian Vikings colonized Greenland – growing crops, raising animals and hunting seals for meat and walruses for ivory. The Vikings are thought to have abandoned the island after temperatures dropped with the onset of the Little Ice Age. But there’s little doubt that what made it possible for the Vikings to settle in Greenland at all were a relatively hospitable climate and less ice than exists today.

To put everything in perspective, the present ice loss of 247 billion tonnes (272 billion tons) of ice every year represents only about 0.01% of the total mass of the ice sheet. At the current rate, therefore, it would take another 10,000 years for all Greenland’s ice to melt.