On Oct  22, after covering this the Friday before on our videos at Weatherbell,  I tweeted this out:

There are a myriad of reasons for why some wildfire seasons are worse than others. The last 3  springs I have made predictions for big wildfire seasons based on one of the factors,  winter and spring rainfall, the ironic thing is if people that weaponize every event were right, and the Perma drought they were forecasting was going on,  there would be much less rain, You see, the more it rains in the winter and spring, the more foliage you are going to have in spring, which, due to the FACT THAT CALIFORNIA IS NORMALLY DRY IN THE SUMMER, is going to dry out and add some extra fuel. This is by no means the only reason but it helps tip the scale,  So this is no surprise, it is like saying there are hurricanes in the hurricane season, guess what? Most years someone is going to get hit and years that they don’t, or wildfires do less damage, are the exception, not the rule, especially with more people living in the way.

Secondly, I have seen this pattern before, with the monster ridge over Alaska driving a strong trough down the west coast. It is extreme but nothing like we haven’t seen before. It leads to extreme cold into the US.  As the plains continue to experience in defiance of climate models that a month ago had nowhere near the cold that has showed up.

It is extremely tough to write this, because my heart truly goes out to people who are being devastated by these events,  They become pawns in the game that is being played, weaponizing every weather event and showing the misery of people who are hit by these things, The natural compassion in almost all of us, tugs at our heartstrings.  It makes anyone that brings up facts to put it in perspective,  seem heartless and cruel.  Yet we must deal with the reality, there are many many people.  ( 3x more) living in California than there were in the 1950s,  This means more people are in harm’s way, but it also means that the problems inherent in greater populations will occur,  More people in the woods, perhaps mistakenly starting fires. Or the power gird problems, these are enhanced by the insistence that we should not be clearing out more deadwood. There are many reasons, but what is used as the example by media that has become a willing accomplice in making sure the issue is one-sided?  CLIMATE CHANGE.  And its pushed by people in charge in an effort to a) hide the realities I am going to show in 2 graphics below and b) advance their agenda.

So this is the “new normal”? If we look since 1980, the acreage burned has been increasing. 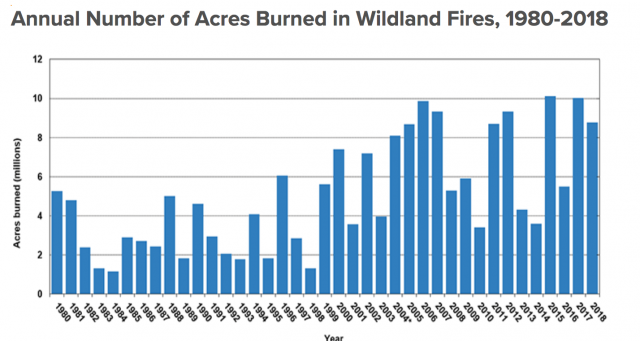 But the new normal? Thank goodness its not the old normal. Look at the  ENTIRE PICTURE!   They want to go back to compare temperatures today to  nearly 100  years ago. Well why not with this issue? Maybe someone doesn’t want people to know the big picture. 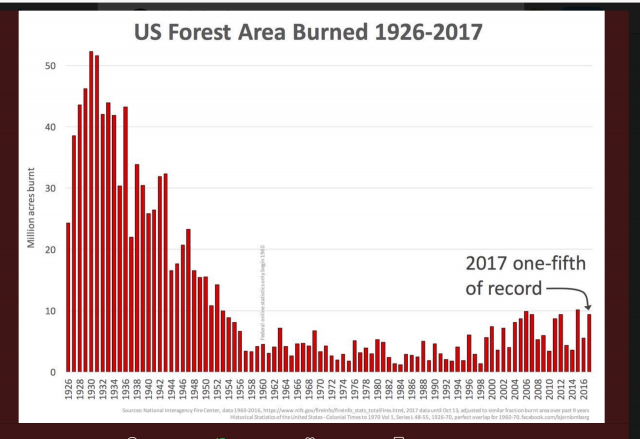 Any logical person looking at this would see it was far worse before,  in spite of the increase in population and unnatural causes of wildfires.
If you  DON’T KNOW THE ENTIRE PICTURE  you wouldn’t see how bad it was before.

It appears this is yet another case of weaponizing weather events to push an agenda, without showing the other side of the argument. It is like this across the board, now.  There is a reason to question, more so than ever, but one has to look, not just accept what they are being told.

Remember what you see up there, its also proof, when it comes to devastating events like wildfires, we are far better off than we were a hundred years ago. Fossil fuels have played a big part in the advancement of mankind. WE DO NOT OWN NATURE. We reside and advance here in some cases, despite nature,  The idea that man can create a Utopian Garden of Eden seems ignorant of what nature can do and an exercise in arrogance of those believing that. This is not to discourage advancement, Quite the opposite, it is to show we are advancing but we are doing so with the tools the people hiding facts like what you see plainly above in the graphics, want to get rid of.

Is there more acreage being burned than 1980? Yes, But there are many reasons other than climate change, and it is not nearly as bad as it was 100 years ago. As in so many things, there are 2 sides to the story, though with the meteorological media madness today, you would never know it,