(CNN)From London to New York City and from Perth to Paris, climate activists will take part in a global general strike on Friday in what is expected to be the biggest day of climate demonstrations in the planet’s history.

The Global Climate Strike is the third in a worldwide series of climate rallies organized by school students, and led by 16-year-old Greta Thunberg.
But it is not just young people taking part this month, with labor and humanitarian groups, environmental organizations and employees of some of the world’s biggest brands also set to participate.
According to Swedish schoolgirl Thunberg, who is in New York ahead of the United Nations Climate Action Summit on September 23, around 4,638 events have been organized in 139 countries. 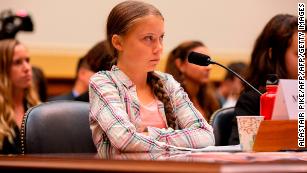 Greta Thunberg has a suggestion for Congress on how to take real action on the climate crisis
By going on strike on September 20 — and September 27 in a few countries — protestors hope to put pressure on politicians and policy makers to act on climate issues.
In an opinion piece for CNN, teenager Katie Eder, co-founder and executive director for Future Coalition, said climate change was “the five-alarm fire that America’s political leaders pretend not to see.”
The 19-year-old added: “On Friday, we’re striking for a Green New Deal; for the immediate cessation of fossil-fuel projects on sovereign indigenous land; for environmental justice; for the protection and restoration of nature; and for sustainable agriculture.
“We’re striking for ourselves, for our friends and family, for the kid who lives down the street from us. We’re striking because it’s what we have to do.”

In March, over 1.6 million people took part in the first Global Climate Strike to demand transformative action on the climate crisis.
The global youth movement has asked for adults to join them this time and many have said they will respond.
Over 1,500 Amazon employees have pledged to walk out and Microsoft workers have also said they will join the strikes.
Microsoft Workers 4 Good tweeted earlier this month: “Microsoft workers will be joining millions of people around the world by participating in the youth-led Global Climate strike on September 20th to demand an end to the age of fossil fuels.”