So much for being “funded by fossil fuels” — they not only don’t fund me, Big Oil won’t even let me speak

It’s all sweetness and light on the Woodside’s “part-of-the-solution” home page. But a ton of industrial bricks are coming for those who dissent.

Part of what solution?

In March I was invited to present the FESAus Christmas function in December this year. They’re the Formation Evaluation Society of Australia, a non-for-profit volunteer organisation for Petrophysicists and Well Log Analysts. A niche technical club of experts. It was unpaid, but I was happy to help make it a fun and push some buttons. “Hot” graphs, cartoons and all.

But in June, suddenly it became controversial to make jokes about climate change. Committee members started resigning, and dummy-spit declarations were made that “a discussion about climate was stupid”. People were shaken. The chips were on the table, the members said “yes” but the committee was split. When decision time came, the key committee meeting was hijacked by an outsider from Woodside who turned up by surprise and darkly threatened that all funding or support for the professional organisation and all future speakers from Woodside would be withdrawn if that climate denier, Jo Nova, was allowed to speak.

It was Woodside or me…

So my presentation was cancelled, and by Woodside no less. What’s astonishing is the effort someone inside this 4 billion dollar revenue giant went to — to stop an unpaid blogger from speaking to a low profile, small technical organisation, with little, as in, almost zero, media influence.  Seriously? As if a group of experienced geos were at risk of being badly influenced by yours truly — there are people who analyze seismic logs and signatures of key stratigraphic surfaces for fun. Does Woodside think they need “protection”? Or is Woodside just running chicken itself? Scared of the Western Australian EPA, which is currently calling for submissions, and promising draconian guidelines that threaten to kill off the industry? Woodside need the EPA to approve all their new projects. Petrophysicists might be almost all skeptical, but some either work for Woodside or hope too. Woodside are the largest operator of oil and gas production in Australia.

When asked to put their objections in writing the Woodside representative refused. When put the test, they weakly said they objected to all climate change discussions. But of course, there were, and are, other discussions mentioning climate on the agenda and they’re not being threatened.

And the fallout hasn’t finished yet — more resignations may take place if threats from Woodside prevent an esteemed member of FesAus from speaking in my place and about climate change. I hear he is skeptical too. That decision is due soon. 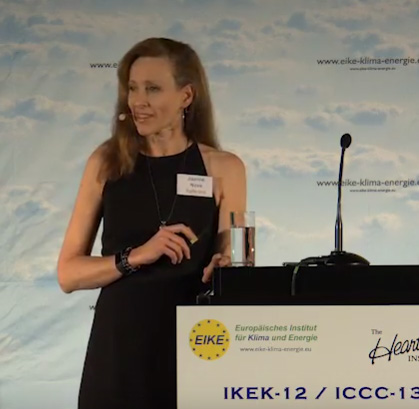 Good enough for Munich, Oslo, London, New York, Sydney and Washington. Not so much, Perth.

Via emails, which I’ve seen, I was referred to as a climate denier, just a blogger, and whose husband was a holocaust denier. It was the full character assassination. We’ve heard it all before. Here’s our reply to one hapless media outlet that posted the anti-semitic allegations about Dr David Evans and then issued a complete apology. I still remember being impressed that the original article was deleted within the hour, late on a Friday night, and our explanation posted immediately. Despite that action, the baseless slurs persist. And what’s my husband got to do with me giving a presentation anyhow? (Where is a feminist when you need one?)

Evans, by the way is PhD, M.S. (E.E.), M.S. (Stats) [Stanford Uni] and a few more degrees, a medal, OK, I’m just showing off. But it doesn’t matter how many prizes you’ve won if the rumor mill circulates lies and innuendo and no one stands against it. Which is why I’m so glad that several people are pushing back. It takes courage when industry heavyweights turn up… especially when jobs are at risk.

One big unspoken implication is that if Woodside won’t let a skeptic speak at an outside event, why would they hire one? Many younger geologists and engineers — who are largely skeptics — are becoming afraid to speak up…

(Lordy B! Pray for Woodside if it hires believer-engineers.)

For what it’s worth, as things got hot I decided to turn up to a FesAus technical meeting myself and listen to a presentation.  I handed out Skeptics Handbooks all round. As expected, almost all of the members are friendly and already skeptical  (see Lefsrud et al). Geologists and Engineers are the most high-grade skeptics around. They know too much about the history of Earth, and the fickleness of models.

Why this heat? Perhaps there is a religious zealot in middle management at Woodside, it’s hard to believe anyone in upper management would have made such a cackhanded PR move and over-reached this badly.

Otherwise this is the dark hand of soft power — the Administration State has a billion reasons to silence independent thoughts. When the government gets too big there doesn’t need to be an edict to quash dissent. People silence themselves.