Make fun of Al Gore? YouTube will slap a ‘Fact Check’ on you without your permission.

Why not? It’s rock solid. Only this time the Big Tech Overlords were listening, too. And, apparently, they weren’t pleased that Loftus poked fun at the “Inconvenient Sequel” star.

The most recent Loftus Party video mocks both the former Vice President as well as President Barack Obama. The latter brought it on himself, to be fair.

The Obamas just bought a $15 million property on Martha’s Vineyard, AKA land kissing the Atlantic Ocean. The move drew plenty of criticism from conservatives, but not for any one-percent complaints.

Why would someone who believes global warming is causing the oceans to rise gobble up coastal property?

It’s a legitimate question, one most journalists refuse to ask. Not Loftus. The conservative comic joined the fray, using comedy to pile on the former President.

The increasingly liberal channel stepped in, adding its own editorial slant to the video. The comedy clip now features a horizontal addendum below the frame. The text, credited to Wikipedia, describes Global Warming in a clinical fashion. 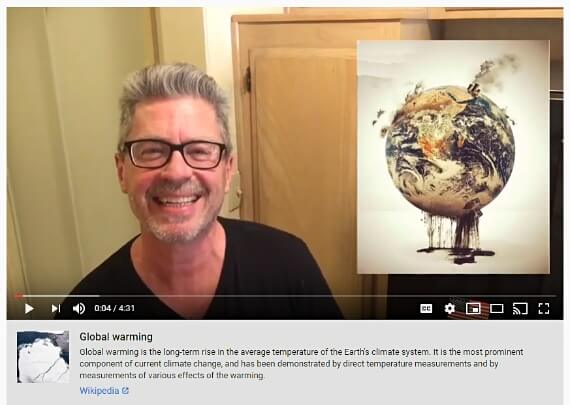 Here’s a screen shot of The Loftus Party video and the Global Warming information slapped on the bottom.

Is this a new feature at YouTube? Does the platform fact check liberal comedians, too? What about hard news clips exploring the now-debunked Russia collusion hoax? Do they get a horizontal explainer ribbon as well?

Loftus shared the YouTube situation on his latest podcast episode.

“At first, I was’t outraged by it … because they haven’t demonetized the video,” Loftus said. His anger grew the more he drilled into the matter.

“They are playing hardball … I can’t get rid of it,” he says of the info strip.

“They’re trying to do a little Kung Fu on me. ‘You wanna joke about Global Warming? We’re gonna embed a link onto your video with a banner talking about. It’s real, its non disputable, and here’s the link to Wikipedia.’ ”

While Wikipedia feeds answers to voice-activated services like Siri and Alexa, journalists rarely rely on it a reputable news source.

That matters since the first day a video tied to a news-related show launches is often its most trafficked window.

PragerU is squaring off against YouTube to court, again, for its consistent attacks on its wildly popular channel. The service lost the first round of the legal fight earlier this year.

Conservative comic Steven Crowder also tangled with the video service, getting demonetized in the process for his squabble with a gay journalist.

It’s part of a larger issue where Big Tech clamps down on conservatives while giving many liberals a pass. Far-left actor Ron Perlman recently found himself briefly suspended by Twitter for wishing death on the surviving Koch brother, Charles, hours after David Koch passed.

Yesterday Twitter slapped me with a 12-hour ban for a tweet referencing the Koch brothers. The day that we are silenced for calling out fascism, for pointing a finger at those who would rape and pillage the very air we breathe, may God help us! @twitter https://t.co/bkc9jwkRgD

That’s the exception that proves the rule. The vast majority of Leftists remain free to Tweet what they wish, including Antifa accounts. Just ask Ellen Barkin.