The young Swedish environmentalist, Greta Thunberg, who has found attentive audiences among Western elites and media alike, has flabbergasted a German politician and police by posing with a masked “left-wing extremist.”
Thunberg, 16, who rose to fame last year after organizing school strikes against climate change and has since attended an array of high-level meetings and conferences, has unexpectedly visited Germany’s ancient Hambach Forest on her way to two climate conferences in the Americas – just ahead of her journey across the Atlantic aboard a multimillion dollar racing yacht.

But it was not just another of Thunberg’s eloquent speeches filled with doomsday messages that drew the attention of politicians and media. Located in western Germany, Hambach Forest is an arena of a longstanding battle between environmentalists-turned-squatters and Germany’s second largest electricity producer, RWE, which operates a local open-cast coal mine.

Much to the dismay of a local politician and a police official, the now prominent climate activist seemingly sided with those whom German security services have branded extremists for quite some time.Photos taken at the scene show Thunberg posing next to a masked figure in black alongside local environmentalists. The veiled woman is one of the squatters who occupied the 12,000-year-old forest in an attempt to prevent it being razed to the ground for the sake of the mine expansion. 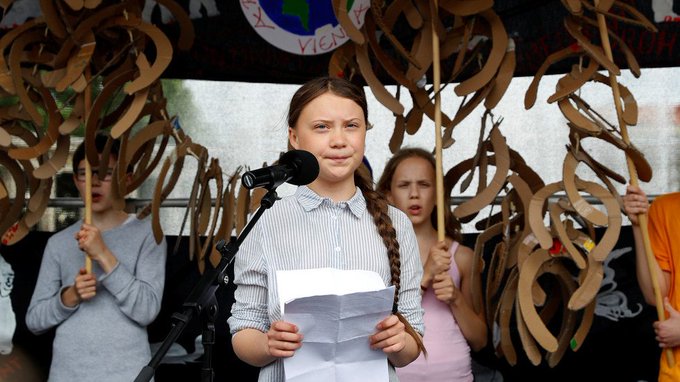 74 people are talking about this

The local eco-activists have a long and troubled history with authorities as they occupied various areas of the forest and even built tree houses there while blocking the roads and railways leading to the mine. Police attempts to forcibly remove them from the area often ended up in clashes and violence. The German domestic security service, the BfV, has designated them as “left-wing extremists.”

Greta Thunberg, Swedish climate activist, stands next to a masked inhabitant of an illegal tree house village in the Hambach Forest, west of Cologne, Germany, on August 10, 2019. ©  Reuters / Wolfgang Rattay

Now, Thunberg’s alleged support for the said “extremists” has unnerved the local authorities.“The photos show a disturbing lack of distance between the moralizing alleged climate champions and violent masked extremists and anti democrats,” Gregor Golland, a member of Chancellor Angela Merkel’s Christian Democratic Party and the deputy head of the party’s faction in a regional parliament, told the German tabloid Bild.