More Data Shenanigans At NASA. “Unadjusted” Data Get Whole New Definition: No Longer “Raw”, But Now “Quality Controlled”
NoTricksZone: Not here to worship what i… / by P Gosselin / 4h

What’s with NASA GISS? The data shenanigans there seem to have no end.

Most of us have noticed that with every new version of temperature data that gets generated by NASA GISS, the more warming that comes with it. The first half of the 20th century often gets cooled while the present gets warmed. This has been shown repeatedly.

One example is Cuiaba, Brazil. Though in this example the past appears not to have been cooled, the more recent v4 “unadjusted” data have been warmed by some 1.0°C throughout since 1960. 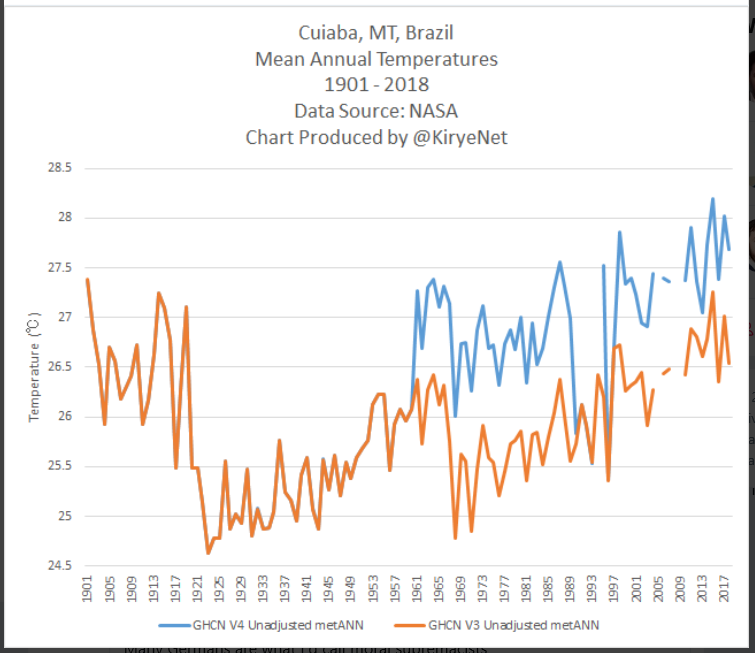 But another peculiar thing has been found. It seems NASA GISS cannot make up its mind on whether the “unadjusted” data are “raw” or if they are “quality controlled”.

When we look at the Key beneath the Cuiaba temperature chart posted by NASA GISS here, we see that “unadjusted” gets called “quality controlled” (marked yellow):

Yet, when we go back to the archives and look at the data plot for Cuiaba, the Key beneath the chart has a different definition for “unadjusted data”. Here they were defined as “raw data as reported by the weather station”!

Well, which is it? Is this another adjustment phase they snuck in?

It’s bad enough that NASA GISS is taking it’s Version 3 “unadjusted” data and adjusting them to Version 4 “unadjusted” (warming them up), but now NASA GISS number crunchers seem unable to make up their minds whether the unadjusted data are “raw” or if they are “quality controlled”.

With all the confusion surrounding all the different versions and changing definitions, we have to wonder what on earth is going on at NASA GISS.

Data used to be raw, but now “quality controlled”

A lot of fishy data business going on at NASA GISS.