This third post in our series on the spurious links between climate change and extreme weather examines the incidence of hurricanes – powerful tropical cyclones that all too dramatically demonstrate the fury nature is capable of unleashing.

Although the UN’s IPCC (Intergovernmental Panel on Climate Change) has noted an apparent increase in the strongest (category 4 and 5) hurricanes in the Atlantic Ocean, there’s almost no evidence for any global trend in hurricane strength. And the IPCC has found “no significant observed trends” in the number of global hurricanes each year.

Hurricanes occur in the Atlantic and northeastern Pacific Oceans, especially in and around the Gulf of Mexico; their cousins, typhoons, occur in the northwestern Pacific. Hurricanes can be hundreds of miles in extent with wind speeds up to 240 km per hour (150 mph) or more, and often exact a heavy toll in human lives and personal property. The deadliest U.S. hurricane in recorded history struck Galveston, Texas in 1900, killing an estimated 8,000 to 12,000 people. In the Caribbean, the Great Hurricane of 1780 killed 27,500 and winds exceeded an estimated 320 km per hour (200 mph). The worst hurricanes and typhoons worldwide have each claimed hundreds of thousands of lives.

How often hurricanes have occurred globally since 1981 is depicted in the figure below. 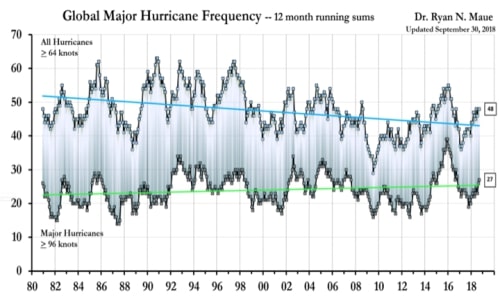 You can see immediately that the annual number of hurricanes overall (upper graph) is dropping. But, while the number of major hurricanes of category 3, 4 or 5 strength (lower graph) seems to shows a slight increase over this period, the trend has been ascribed to improvements in observational capabilities, rather than warming oceans that provide the fuel for tropical cyclones. 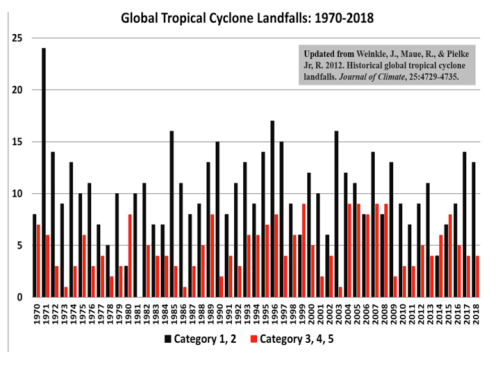 It’s clear that the frequency of landfalling hurricanes of any strength (categories 1 through 5) hasn’t changed in the nearly 50 years since 1970 – during a time when the globe warmed by approximately 0.6 degrees Celsius (1.1 degrees Fahrenheit). So the strongest hurricanes today aren’t any more extreme or devastating than those in the past. If anything, major landfalling hurricanes in the U.S. are tied to La Niña cycles in the Pacific Ocean, not to global warming.

Data for the North Atlantic basin, which has the best quality data available in the world, do, however, show heightened hurricane activity over the last 20 years. The figure below illustrates the frequency of all North Atlantic hurricanes (top graph) and major hurricanes (bottom graph) for the much longer period from 1851 to 2018. 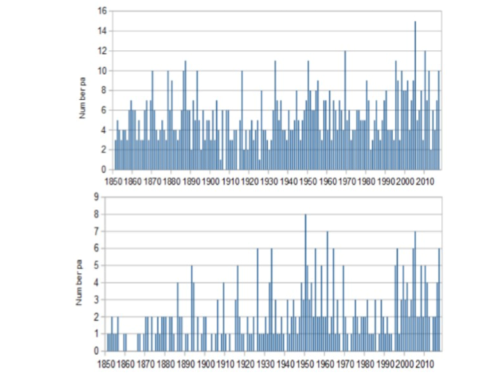 What the data reveals is that the annual number of major North Atlantic hurricanes during the 1950s and 1960s was at least comparable to that during the last two decades when, as can be seen, the number took a sudden upward hike from the 1970s, 1980s and 1990s. But, because the earth was cooling in the 1950s and 1960s, the present enhanced hurricane activity in the North Atlantic is highly unlikely to result from global warming.

Even though it appears from the figure that major North Atlantic hurricanes were less frequent before about 1940, the lower numbers simply reflect the relative lack of observations in early years of the record. Aircraft reconnaissance flights to gather data on hurricanes didn’t begin until 1944, while satellite coverage dates from only 1966. While the data shown in the figure above has been adjusted to compensate for these deficiencies, it’s probable that the number of major North Atlantic hurricanes before 1944 is still undercounted.

The true picture is much more complicated, and any explanation of changing hurricane behavior needs to account as well for other factors, such as the now more rapid intensification of these violent storms and their slower tracking than before, both of which result in heavier rain following landfall.

The short duration of the observational record, and the even shorter record from the satellite era, makes it impossible to assess whether recent hurricane activity is unusual for the current interglacial period. Paleogeological studies of sediments in North Atlantic coastal waters suggest that the current boosted hurricane activity is not at all unusual, with several periods of frequent intense hurricane strikes having occurred thousands of years ago.

Next: No Evidence That Climate Change Causes Weather Extremes: (4) Tornadoes 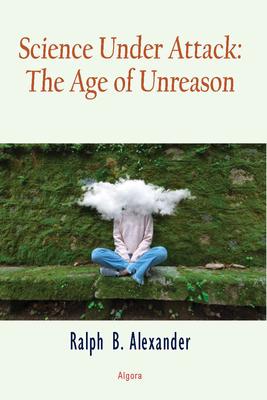