‘Mini AOC’ (Who Mocked AOC), Doxxed And Hit With Death Threats, Family Shuts Down All Her Social Accounts

The family of a young girl who went viral for mocking Democratic New York Rep. Alexandria Ocasio-Cortez shut down all of her social accounts Wednesday, after receiving death threats and harassing phone calls.

A tweet from the account purporting to belong to the little girl’s stepfather said she will not be doing any more content because the harassment and death threats “have gone too far” and threaten her and the family’s safety. (RELATED: Kellyanne Conway Throws Down With Ocasio-Cortez: ‘All Talk, No Dollars’)

“Ava will not be doing any more MINI AOC content,” the tweet said. “The Left’s Harassment and death threats have gone too far for our family. We have been getting calls on our personal phone numbers. For our safety and our child’s safety, we deleted all Mini AOC accounts.”

Ava will not being doing any more MINI AOC content.

The Left’s Harassment and death threats have gone too far for our family. We have been getting calls on our personal phone numbers.
For our safety and for our child’s safety, we deleted all Mini AOC accounts.

15.5K people are talking about this

The 8-year-old girl, known as “Mini AOC,” got attention for her impersonations of Ocasio-Cortez, such as a tweet in which she mocked the New York Democrat’s theatrics over the migrant crisis. “Every time I plan a visit to the park it’s closed!” she tweeted, along with several photos of her dressed up to look like Ocasio-Cortez when she visited a migrant detention center this week. (RELATED: Ocasio-Cortez Refuses To Respond To Her Claim She Saw ‘People Drinking Out Of Toilets’ At Border Facility) 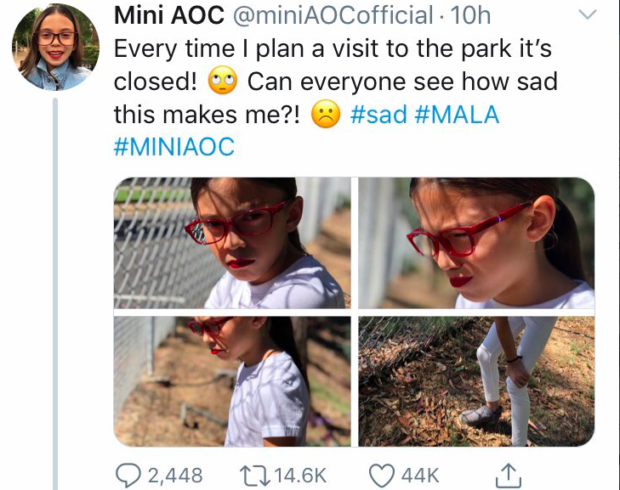 She appeared on Fox Business in May to discuss her impersonations, saying her dad and her uncle encouraged her to start making videos because they thought she bore a striking resemblance to Ocasio-Cortez. She said she likes Ocasio-Cortez, but “not that much” and impersonated her saying “did you know that?” when prompted by the Fox News host.