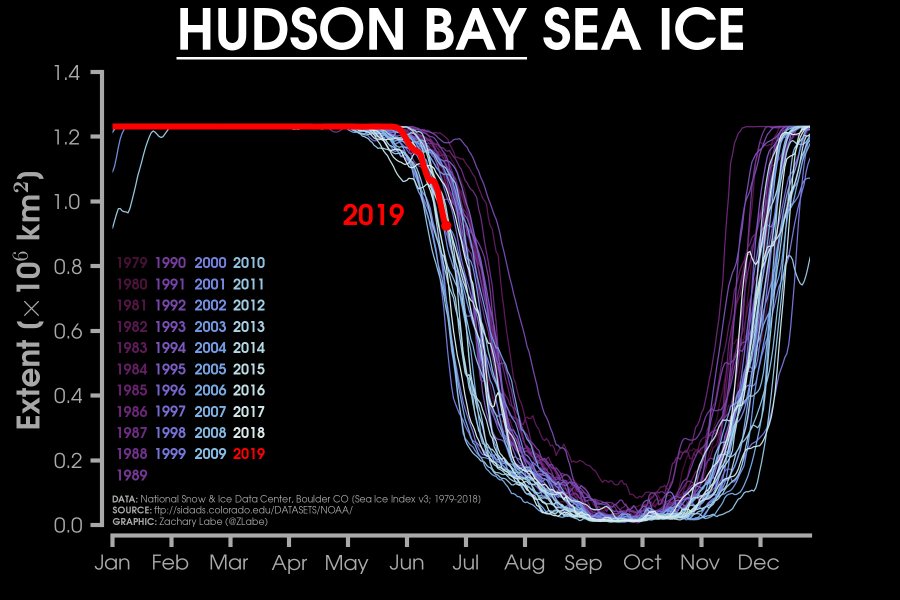 Straight from the horse’s mouth: all polar bear females tagged by researchers around Churchill in Western Hudson Bay last year were still on the ice as of 25 June. With plenty of ice still remaining over the bay, spring breakup will be no earlier this year than it has been since 1999. Contrary to predictions of ever-declining ice cover, the lack of a trend in sea ice breakup dates for Western Hudson Bay is now twenty years long (a hiatus, if you will) and yet these bears are repeatedly claimed to have been seriously harmed in recent years by a loss of sea ice.

In fact, WH bears have faced relatively few ‘early’ years of sea ice breakup and breakup has never come before the 15th of June. The earliest recent spring breakup date did not come in 2012 – when sea ice hit a summer record low – but in 1999, when Hudson Bay sea ice suddenly began to melt by late June rather than mid-July (Cherry et al. 2013; Castro de la Guardia et al. 2017; Lunn et al. 2016). And this year, as has been the case since 1999, breakup looks to be about two weeks later (give or take a week or so, at around 1 July), than was the case in the 1980s and early 1990s.

Thanks to Andrew Derocher for the heads-up tweets regarding his field research: 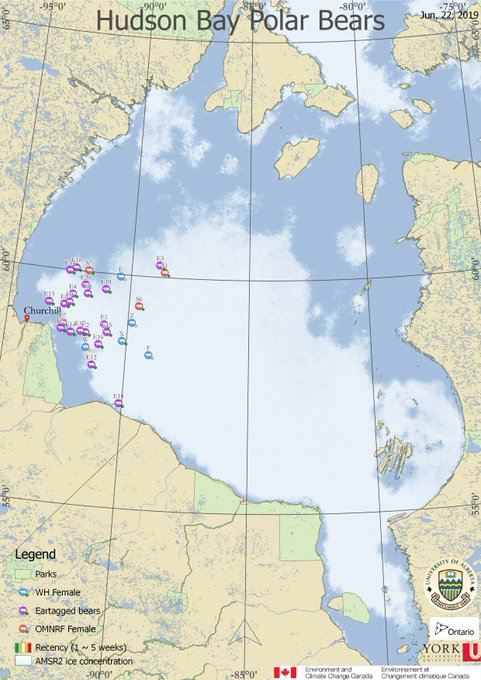 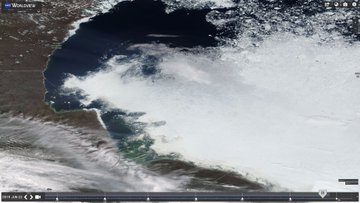 Western Hudson Bay #polarbears are still all on the ice. Great news as the longer they’re out there, the shorter their on land fast will be. It’s a very tight grouping of bears this year with almost all near the western ice edge.

All satellite tracked #polarbears are on the ice. It’s a good year so far & the bears were in good condition this spring. Challenges for the population (reduced by >30% in #) will increase if ice declines continue. Recruitment remains low. A good year helps but not in long term. https://twitter.com/ZLabe/status/1142923012334690304 …

Sea ice cover on the Hudson Bay (Canada) has a very sharp seasonal cycle. This year’s decline is fairly close to average. Here is the latest satellite view: https://ice-glaces.ec.gc.ca/cgi-bin/getprod.pl?prodid=IPYMMR1HB&wrap=1&lang=en … 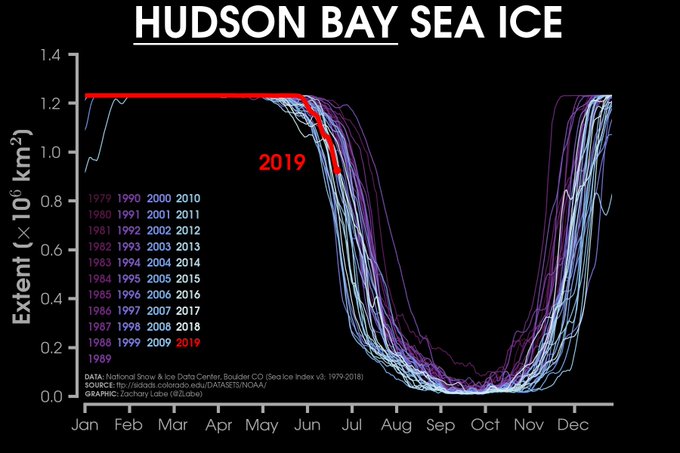 “While it is certainly true that the overall trend in time onshore since 1979 has been decline, the lack of a continued trend since 2001 is not what was expected or predicted, especially given the marked decline in global sea ice levels that occurred from 2007-2015 (Crockford 2017), and the predictions of how devastating such low levels of ice would be to polar bears in areas like Hudson Bay that have only seasonal sea ice.”

Last year, virtually all bears that come off the ice around Churchill had arrived by the third week of July last year (16th-22nd). However, many more would have come ashore later than that in areas further south along the coast and perhaps a dozen came ashore around Arviat to the north as early as late May, long before it was necessary due to ice conditions on the bay.

Most bears leave the ice well after the official ‘breakup’ date, however that is defined. Cherry and colleagues (2013) studied WHB bears between 1991 and 2009 and stated:

That’s important to remember – just because that arbitrary sea ice coverage has been reached, the bears leave the ice when they are good and ready. Sometimes WH bears leave well before they really need to go ashore (as a few did last year in the NW sector as noted above), but on average, they stay about four weeks after the official sea ice ‘breakup’ point is reached. Most of the population leaves the ice well south of Churchill, so the date that Churchill bears come ashore is often earlier than average.