Labour’s Marxist shadow chancellor John McDonnell and, unfortunately, my favorite band Radiohead.McDonnell has suggested that a future Labour government might introduce a 10-hour working week and slash pay by 75 percent, as part of a radical plan to ‘combat climate change.’

Britain’s Labour Opposition Party, which has a real chance of winning the next UK election, is seriously considering a think tank proposal to radically cut working hours and wages to reduce everyone’s carbon footprint.

Britain’s Labour Opposition Party, which has a real chance of winning the next UK election, is seriously considering a think tank proposal to radically cut working hours and wages to reduce everyone’s carbon footprint.

Plan for 10-hour working week with 75% paycut under Labour

The Labour Party is discussing plans to bring in a 10-hour working week and slash pay by 75 per cent to tackle climate change. The radical report titled The Ecological Limits of Work by the Autonomy Group states unless current carbon emissions are cut there would be an ‘unprecedented decrease in the economic activity’.

It says the sustainable work week would likely be ‘well below 10 hours per week’.

Shadow Chancellor John McDonnell, who has previously backed a four-day working week, said: ‘This is a vital contribution to the growing debate around free time and reducing the working week.’ Leo Murray, adviser to Shadow Treasury minister Clive Lewis, said: ‘I like this take a lot.’

Lewis has previously backed another controversial report from the group on reducing the working week.

The full report, “The Ecological Limits of Work”, is available here.

Under the topic “other considerations”, the report authors express concern that their proposed cut might not be deep enough, because people working shorter hours might be more productive during the time they do work, which would cancel some of the ecological “benefit” of a shorter working week.

This is not a fringe proposal. Shadow Chancellor John McDonnell, who praised the proposal, is a senior figure in the Labour Party, and has a real chance of being put in charge of Britain’s banking system and economy after the next election.

The report kind of skips over issues which might concern some workers, like how British workers already suffering fuel poverty are supposed to warm their homes and feed their families with 75% less money, and how they are supposed to pay their mortgages and bills (maybe all mortgages will be forgiven?), but I doubt the politicians considering this radical policy proposal have ever personally experienced real hunger, poverty or cold.

Every credulous pillock in the world is jumping on the Extinction Rebellion bandwagon, the latest being Labour’s Marxist shadow chancellor John McDonnell and, unfortunately, my favourite band Radiohead.

McDonnell has suggested that a future Labour government might introduce a 10-hour working week and slash pay by 75 per cent, as part of a radical plan to ‘combat climate change.’

Radiohead, meanwhile, have seized the opportunity of a hack/blackmail on their back catalogue to virtue signal their green wokeness:

Radiohead to support extreme political organisation that campaign to ban all transport by 2025, close all international borders forever, dismantle democratic control of government, and to return living standards not seen for half a millennium. https://twitter.com/JnnyG/status/1138403690350596098 … 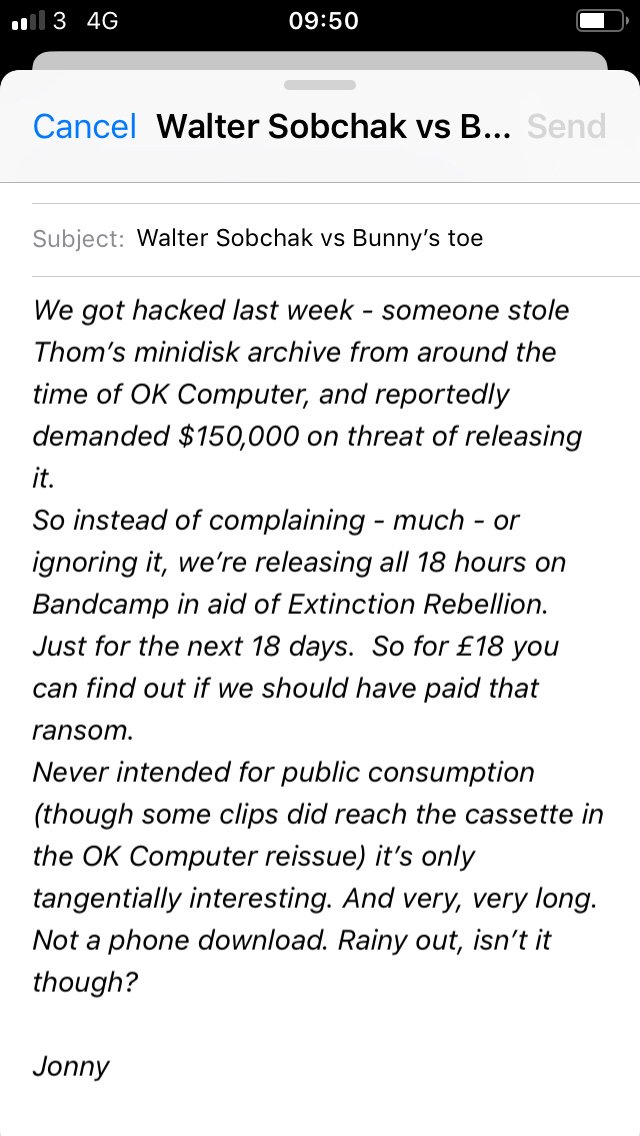 120 people are talking about this

It is, of course, a perfectly reasonable desire – and actually, one that everyone shares whether they are on the left or the right or in the middle – to want a healthy, unpolluted planet, teeming with biodiversity.

The problem is – as I never tire of pointing out, because someone has to – the measures being proposed by eco-fascist organisations like Extinction Rebellion and endorsed by their useful idiots in the Labour party or in privately-educated multi-millionaire rock ensembles like Radiohead will bring little to the planet but misery, poverty and devastation.

Avian fauna are being killed by bat-chomping, bird-slicing eco-crucifixes; whales, dolphins and seals are being killed by offshore eco-crucifixes; orang-utans and other forest creatures are having their habitats destroyed by palm oil plantations being grown to create bio-fuels; American hardwood forests are being chopped up to provide more ‘biofuel’ for the Drax power station; rare earth minerals are being dug in hideously eco-unfriendly conditions in China for electric car batteries and wind turbine parts; and so on and on it goes.

In order to save the planet, the greenies seem to think, we’re going to have to kill it with fake kindness.

But you sort of expect posh-boy rock bands and Marxist fans of Venezuela, Hamas and the IRA to endorse this kind of nonsense: what do they know about anything, after all?

What’s much more worrying is when you find Conservative governments jumping on the bandwagon, which is what Britain’s is doing right now.

Theresa May’s “net zero emissions by 2050” target – as proposed by the creepy and very dubious rent-seeker Lord Deben’s Committee on Climate Change – is likely to cost the UK economy over £1 trillion.

Decarbonising Britain’s heating alone will cost us £28 billion a year.

This is serious money and the knock-on effects of these and other frivolous, ill-thought-through exercises in green virtue-signalling will be huge, killing jobs and making Britain less competitive – while affecting the course of global climate change not one jot.

Yet amazingly, none of the prospective candidates to replace Theresa May as Prime Minister is addressing this serious problem.

Rather, Michael Gove, Boris Johnson, Jeremy Hunt and the rest seem to be engaged in a competition as to who can demonstrate themselves to be most in thrall to the Ice Age 2-driven wisdom of the pigtailed, autistic child-goddess St Greta the Divine.

This is dangerous stuff. How are we to take any of their plans to cut costs and reboot the economy seriously when any savings they propose or any tax reductions they offer are going to end up being more than offset by these pointless sacrifices to Gaia?