Results show EU-critics were biggest winners, Greens lost in Greta’s own Sweden and managed to pick up only 7 new seats outside of Germany.

Now that the dust of Europe’s election has settled and the numbers are in, it is possible to get a clear picture of what exactly happened.

If you believe the green-socialist dominated media in Europe, you’d think the Greens came up the big winners, and so no time should be wasted in implementing a rapid green transformation of human society.

But a fact check tells this is not the case at all.

“Green victory a myth”, EU critics gained the most

The German freiewelt.net here, for example, comments that the Green election victory is a myth.

According to freienet.de, the side with the greatest gains were the EU critics:

The real election winners are to be found among the EU critics. As a whole, a total of 172 seats were taken, 18 more than in the previous election. The strongest individual parties come from the camp of EU critics, and the greatest increase in votes is recorded among them. Never before have so many people voted for parties critical of the EU in an election to the European Parliament.”

Ironically, the Greens even lost in Greta Thunberg’s home country of Sweden, so reports the German weekly FOCUS here:

In contrast to many other European countries, especially Germany, the Greens lost votes which amounted to 3.8 percentage points. Five years ago, they were the second strongest force behind the Social Democrats.”

Also Daniel Bleich of the online ruhrbarone.de looked at the results and concluded “Europe did not vote green”: 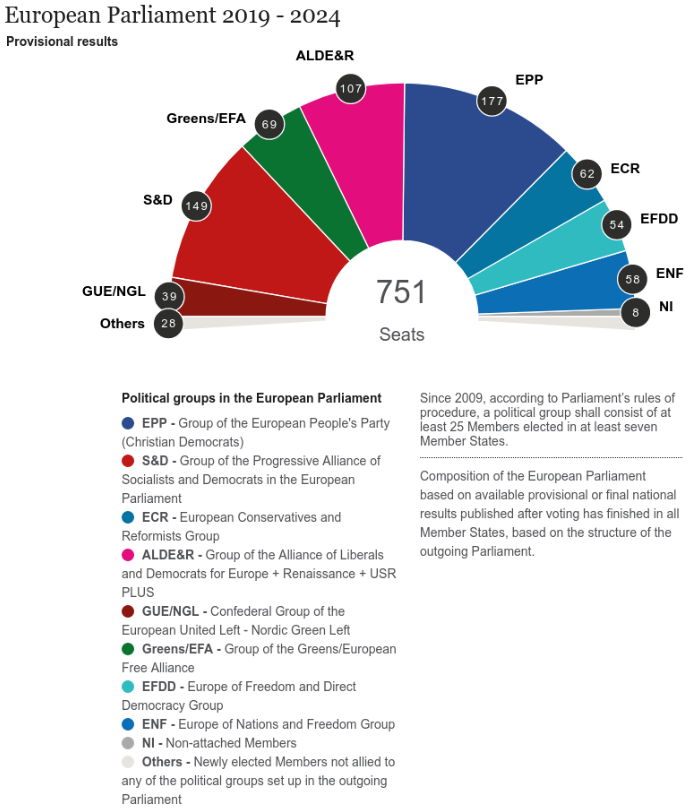 The Greens with 69 of 751 seats (less than 10%) are only the 4th strongest block in the EU Parliament. Source: EU here.
Mr. Bleich also writes that German flagship ZDF and ARD public broadcasting networks suffer from “selective perception and departed from journalistic standards” in claiming the Greens were the big winners of the European election.

Of the 17 new seats gained by the Greens in the European Parliament’s 751 seats, 10 alone came from Germany where the Greens in fact did perform formidably – but at the expense of the imploding socialist and communist parties.

Only 7 seats picked up from the rest of Europe

Europewide, the Greens managed to pick up only 7 new seats from all the other remaining countries. “That does not sound like a clear victory,” Bleich reports.

Overall, the conservatives (EPP) came up on top as the largest block.

The left lost in Germany

The freiewelt.net site here also reported that the final tally in Germany shows the SPD socialists and leftists together lost 13% while the Greens gained 10%, thus meaning a net loss of 3% for the left of centre parties.  This leaves claims of a leftist victory blared out by the media to be a myth.

According to freiewelt.net: “The left spectrum in Germany did not grow, rather it got a bit smaller.”

Meanwhile German Minister of Research Anja Karliczek (CDU) warned earlier today of “a national going-it-alone with respect to a CO2 tax”. Karliczek said in an interview with the Neue Osnabrücker Zeitung daily: “We need a common line here in the EU or at least among a larger number of states.”