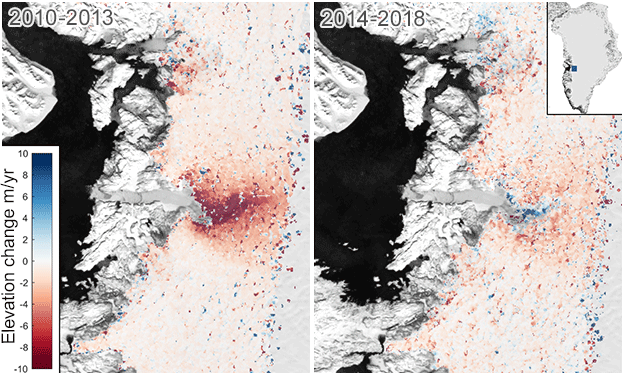 European satellites have detailed the abrupt change in behavior of one of Greenland’s most important glaciers. The glacier’s trunk is thickening by 20m a year.

In the 2000s, Jakobshavn Isbrae was the fastest flowing ice stream on the island, travelling at 17km a year.

As it sped to the ocean, its front end also retreated and thinned, dropping in height by as much as 20m year.

“The question now is: what’s next for Jakobshavn? Is this just a pause, or is it a switch-off of the dynamic thinning we’ve seen previously?”

But now it’s all change. Jakobshavn is travelling much more slowly, and its trunk has even begun to thicken and lengthen.

“It’s a complete reversal in behaviour and it wasn’t predicted,” said Dr Anna Hogg from Leeds University and the UK Centre for Polar Observation and Modelling (CPOM).

The glacier is sited in southwest Greenland. It’s famous for its spectacular production of icebergs – colossal blocks calve from its terminus and drift down its fjord, out into Disko Bay and onwards to the North Atlantic.

More than likely, it was Jakobshavn that spawned the iceberg that sank the Titanic.

Scientists’ interest in the glacier lies in its role as a drainage outlet for the Greenland Ice Sheet. It’s a key channel for the export of ice that can then raise global sea levels.