A new Netflix documentary series that features disturbing footage of walruses plunging off a cliff to their deaths — a phenomenon attributed by the filmmakers to climate change — has sparked a fact-check backlash by critics questioning whether the animals were actually fleeing polar bears or drones. 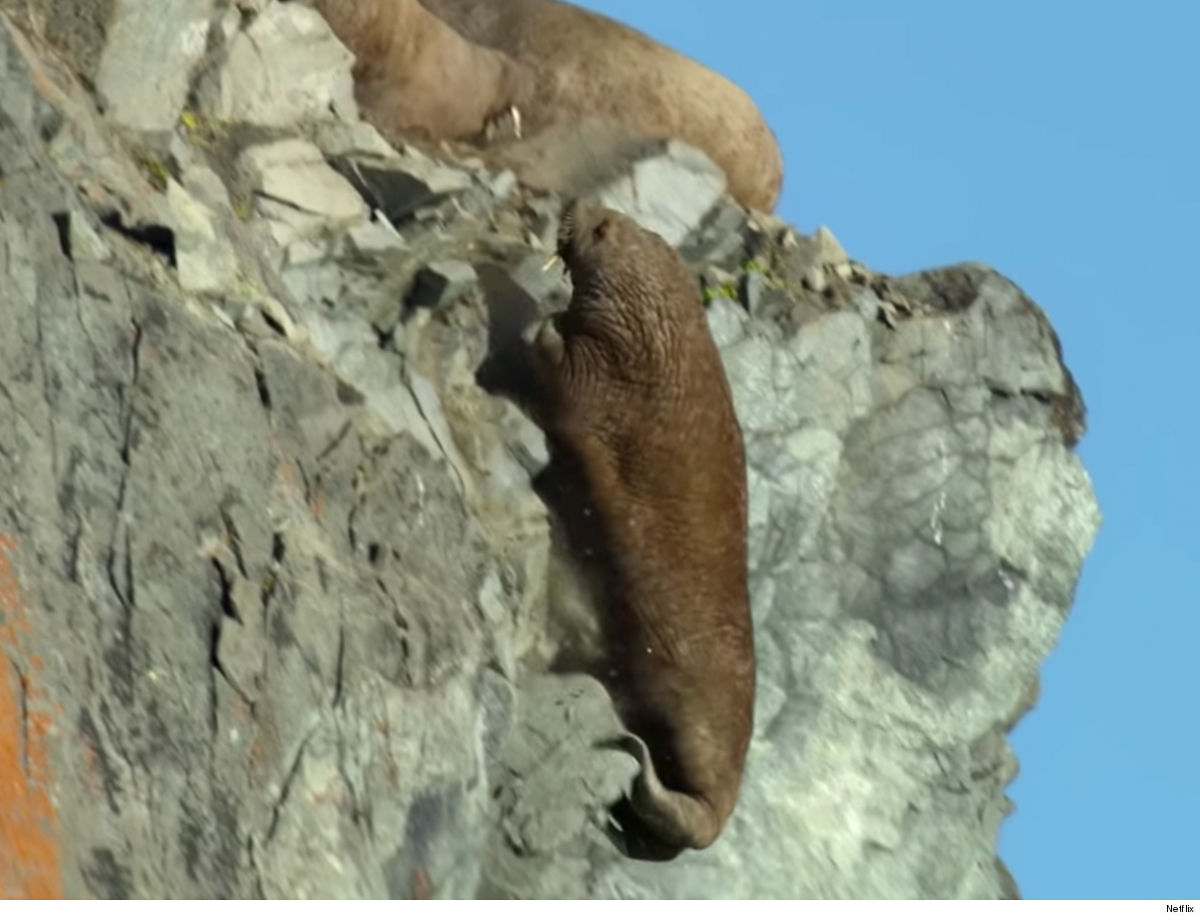 Leading the pushback is Canadian zoologist Susan Crockford, who said Netflix’s “Our Planet” is misleading the public about the massive gathering of walruses on the rocky beach, known as a haulout, and the footage showing walruses falling from a steep ledge.

The episode, titled “Frozen Worlds,” said the enormous haulouts on the Russian coast of the Chukchi Sea were the result of global warming, claiming that the decline of summer sea ice in the Arctic had forced the walruses to squeeze together, with some scaling a rocky cliffside to escape the crowding.

“They do so out of desperation, not out of choice,” Mr. Attenborough said on the series, released April 5. “Their natural home is out on the ice.”

He explained that walruses have poor eyesight and that “as they get hungry, they need to return to the sea. In their despair to do so, hundreds fall from heights they should never have scaled.”

“We have records of walrus haulouts that are nearly a century old, including some from this part of the Arctic,” she said in a statement on the Global Warming Policy Forum. “The idea that walruses are being driven on shore by sea-ice decline is entirely incorrect. They have always done so. In fact there are reports of walruses falling over cliffs from long before the age of global warming too.”

She posted a 1994 U.S. Fish and Wildlife Service video showing dozens of walruses rolling down a cliff to their deaths in Alaska, which a biologist described as “a mystery” and “a real head-scratcher.”

“Walruses have shown similar behavior on the U.S. coastline when space and ice were not an issue, and the reason is unknown,” Lori Polasek, research assistant professor at the University of Alaska Fairbanks, told The Atlantic.

As Ms. Crockford put it, “Sir David’s story about climate change appears to be just that — a fable.”

The series was created in conjunction with the World Wildlife Fund, which has stood by the climate change narrative.

“Have you watched the heartbreaking walrus scene in #OurPlanet @Netflix yet?” tweeted the WWF on April 15. “Discover how climate change is having a tragic impact on these incredible animals.”

Netflix did not respond to requests for comment, and the WWF declined a request for additional reaction.

Another bone of contention lies with the footage. Ms. Crockford said some of it appears to have been recorded during a September 2017 episode in Cape Kozhevnikov when hundreds of walruses fell to their deaths after being spooked by polar bears.

The Global Warming Policy Forum’s Andrew Montford pointed to a behind-the-scenes video showing polar bears in the vicinity. He also suggested that the walruses may have been frightened by drones used by the camera crews, though filmmakers have said they were careful to maintain a safe distance.

Producer Sophie Lanfear has acknowledged that the walrus footage was filmed in two locations but insisted that the massive marine mammals “were not driven off the cliffs by the polar bears.”

“[W]e know this because we had two team members watching the cliffs from afar who could see the polar bears and were in radio communications with us to warn us about any bears approaching the crew closer to the walrus and the cliffs,” Ms. Lanfear told the [U.K.] Metro.

She attributed the haulout to a lack of sea ice. “At this particular site, once the beach below the cliffs was full, they spread out and up the cliffs and were unable to find their way safely down, with tragic consequences,” she said.

Ms. Crockford wasn’t buying it. She said the “lie” being told is that “200-300 walruses fell during the time they were filming, while in fact they filmed only a few: polar bears that were responsible for the majority of the carcasses on the beach below the cliff.”

“This is, of course, in addition to the bigger lie that lack of sea ice is to blame for walrus herds being onshore in the first place,” she said.

The back-and-forth comes on the heels of last year’s “starving polar bear” scandal, which culminated in an apology by National Geographic over a 2017 SeaLegacy video of an emaciated bear used as an example of global warming’s impact.

A SeaLegacy official later acknowledged that the bear was probably sick and that the photographer had been searching for an image to “communicate the urgency of climate change.”