Posted on April 18, 2019 | Comments Off on Bogus Greenpeace claim that lost Russian polar bear is evidence of climate change

Another day, another bogus starving polar bear claim from an environmental organization. Polar bear starvation is virtually never caused by climate change but apparently, Greenpeace thinks there are still some gullible folks out there who will believe anything they are told. A young male polar bear in poor condition found far south on the Russian coast of the Bering Sea a few days ago is an isolated incident: it is not evidence of anything except the sad fact that the life of a polar bear can sometimes be brutal. In contrast to these reports, Chukchi Sea polar bears are doing extremely welloverall.

Headline from The Guardian 18 April 2019

Environmental activists are of course blaming climate change for the appearance of this ‘exhausted’ polar bear found in a Russian village on the edge of the Bering Sea on the Kamchatka Peninsula and the media has been more than happy to spread their allegations far and wide (here, here, and here).

In contrast, the full story carried by The Siberian Times (18 April 2019, with more pictures and video)  confirms the bear is a young male who arrived at Tilichiki on an ice flow that moved down the coast while the bulk of the Bering Sea ice was retreating north.  It was a sad accident of life that has apparently happened before: he, like a few others, happened to get caught on the wrong piece of ice. The Russian report does not include a quote from Greenpeace and does not mention climate change.

Here is how he is described:

‘Locals filmed it on video, photographed it, and yesterday – fed with fish, though, he did not eat much.

‘The bear looks drained and weak.

‘For some reason he does not catch fish and seals, which we have in good supply.’

Nor has he threatened people.

‘He did not even enter the village itself,’ she said.

‘He lies near the bay on the ice – close to our police station.”

And here is Greenpeace, trying to make this a story about climate change: 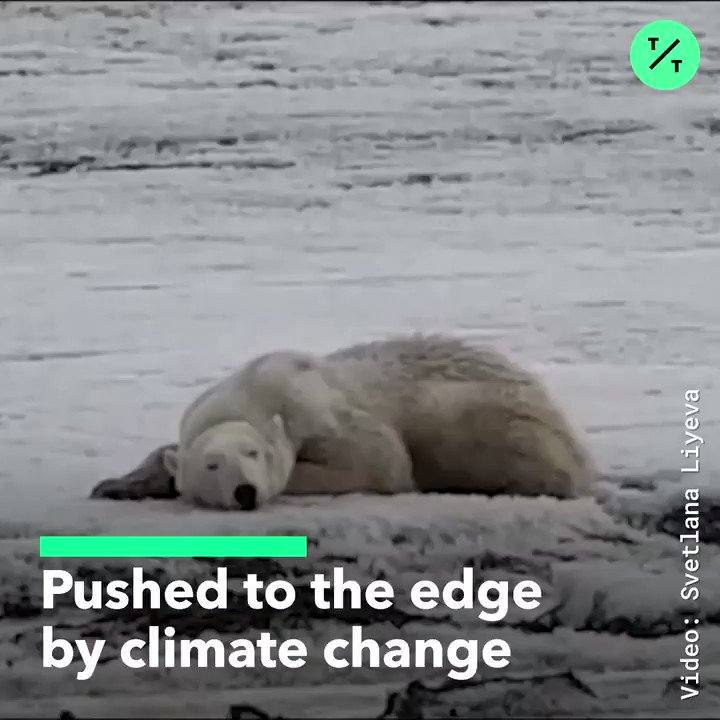 A lost, exhausted polar bear has swum hundreds of miles to a village in Russia.

The Arctic ice it inhabits has likely shrunk from climate change, says @Greenpeace

But this is a phenomenon that happens virtually every year somewhere across the Arctic and likely always has done. It is no more a story about climate change than the bogus starving polar bear video promoted by National Geographic and Paul Nicklen in late 2017:

In some areas, particularly the Bering, Barents and Labrador Seas, ice can retreat rapidly in the spring and bears can get left behind on isolated chunks of ice floe. See my last post about just such a bear onshore in Newfoundland, who may be in the same situation if he does not leave soon, or one from last year in the Barents Sea. Poor judgment cannot be blamed on climate change.

Moreover, some young bears will always be in poor condition at this time of year because they are inexperienced hunters and too small to compete against bigger, stronger bears: that is an established fact.

Bottom line: This lost Kamchatka bear is not evidence of climate change.

Some background on causes of loss of body condition, from my post last year:

There are at least eleven natural causes of loss of body condition for polar bears (getting thinner and/or emaciated to the point of death) that must be ruled out before starvation can be blamed on lack of sea ice (many of which require a necropsy):

The reason a close examination of a thin bear is required to determine the cause of its condition is apparent below (even more so if the cause was an illness like cancer):

“I captured an emaciated but very large male polar bear one autumnwhen he should have been near his maximum weight. His weight was less than half that of similar-size males at that time. He seemed to be fit and his teeth were in excellent shape. On examination, however, we discovered that his maxilla [upper jaw] was broken through (Fig. 27.(0), and there was a pronounced gap in his palate. The front portion of his upper jaw was attached only by the skin and musculature of his lips. His ability to bite and hold large prey was seriously compromised. How tbis injury was sustained is not clear. He has not been recaptured, and given the bear’s lean state just before tbe harshest season of the year, I suspect he did not survive the winter.“ [Amstrup 2003:602, my bold]

As explained in my previous post, the few bears that come ashore in late spring (perhaps lured by abundant bird eggs on shore) and become stranded by retreating sea ice that does not make a timely return, are not victims of climate change per se but rather casualties of their own poor judgment. In the recent examples cited in Svalbard, the bears involved were not forced ashore but chose to do so, perhaps due to lack of experience and/or competition on the ice for available seals (items 1-3).

The last three items in the list above (9-11) reflect conditions in winter and spring that can effect survival and body condition later in the year but will not be obvious from a necropsy. These causes of poor body condition are more likely to be present if more than one bear is affected in a local area.

Similarly, #10 (thick snow over ice) was the likely reason that many bears that came ashore in less than good condition near Churchill in the 1980s (Ferguson et al. 2005) and perhaps for the poor condition and lower cub survival of bears in the 1980s (Derocher and Stirling 1992, 1995).

And #11 (less food for seals in summer) explains why the condition of virtually all bears in the Chukchi Sea improved after 2006 when there was less summer ice compared to the 1980s, because less summer ice meant more time for seals to feed and therefore more fat seal pups for polar bears to eat the following spring (Rode et al. 2013, 2014, 2018).

In any case, the trend data is inconclusive. The summary paper by Stirling and Derocher (2012) is still presented as “evidence” that sea ice declines caused declines in body condition that eventually led to population decline, even though the Western Hudson Bay data on body condition has not been updated since 2004 and in any case never explained the decline in body condition that happened in the 1980s (before sea ice declined). More importantly, the trend from Western Hudson Bay is not matched by similar trends from other regions.

Contrary to predictions, Chukchi Sea polar bears have became fatter with less summer sea ice (Rode et al. 2013, 2014, 2018), not thinner. And for years, the body condition of Southern Hudson Bay bears declined only slightly (Obbard et al. 2004, 2006, 2007, 2013, 2015, 2016), even though the decline of sea ice since 1998 has been as severe as for adjacent Western Hudson Bay bears. Only by an application of statisitcal magic did the latest population count of SH bears show a slight decline (Obbard et al. 2018), and body condition data was not revealed. As noted above, the authors did not blame lack of sea ice for the poor survival of Southern Hudson Bay cubs in 2015: they left it unexplained.

Bottom line: Trends don’t explain individual observations. When polar bear specialists raise the point that trends in declining weights of polar bears correlate to trends in early breakup dates or an extended ice-free season (see discussions here and here) in the context of explaining the state of a particular thin or starving bear, they are perpetuating the white lie.

Stirling, I. 2002. Polar bears and seals in the eastern Beaufort Sea and Amundsen Gulf: a synthesis of population trends and ecological relationships over three decades. Arctic 55 (Suppl. 1):59-76. http://arctic.synergiesprairies.ca/arctic/index.php/arctic/issue/view/42