Activist: I Spent a Night with Protesters From ‘Extinction Rebellion’ Willing to Be Arrested to Fight Climate Change

A timeline of what it’s like to spend the evening with the climate activist group Extinction Rebellion.
By Patrick Heardman; photos by Chris Bethell 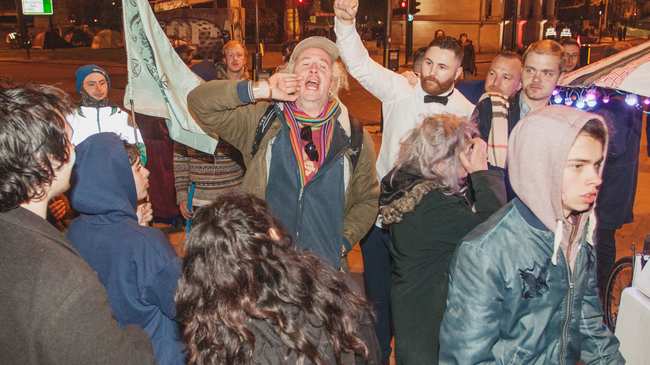 Planet Earth is hurtling toward irrecoverable destruction at an alarming rate. The Arctic is melting, the seas are rising, temperatures are increasing, and the world is burning. We’re collectively entering the 9th Circle of hell in Dante’s Inferno.

We owe this unavoidable truth almost solely to the exploits of capitalism and its overarching ethos of endless consumption—a worldview that’s quite simply incompatible with our planet, a tiny rock in the vastness of space with a distinctly finite amount of resources.

But what can be done about it? It can feel helpless being a single person in the face of the great grinding gears of capitalism, but affirmative and direct action in the form of collective protest can prove a powerful vehicle for change, and spurn those with power into action. Extinction Rebellion is a network of climate activists across the globe doing just that. So I decided to check out their planned protests in London—where they have decided to stop traffic in five key locations of the city until the Conservative government meet their demands—to see them in action and join the picket line. Maybe all hope isn’t lost after all.

7:00 PM: I’m packing for the protest. I’m excited because rumor has it that musician Thom Yorke is making an appearance.

7:20 PM: I quickly tidy up my room and water my house plants. They’re dying but that’s fine because I’m about to save the entire world so…

7:22 PM: It’s time to get arrested in the name of planet Earth baby!

7:39 PM: I catch up on some current affairs on the bus, then play that game where you rip the head open of someone in the paper and the word behind is what they’re really thinking. Sajid Javid [Home Secretary of the United Kingdom] is thinking about “Dragons.”

7:41 PM: Matt Hancock’s [Secretary of State for Home and Social Care] face is making me feel ill. I move to the front of the bus to feel less ill.

7:50 PM: The bus stops for three minutes to even up the service, another win for the climate fighters!

8:14 PM: My footy leg warmers are already chafing under my pants because I’m in Uniqlo ankle pants. Long night ahead, let’s go activists.

1555415617978-ChrisBethell_extinctionnight-2
8:18 PM: I get to Waterloo Bridge. Some guy is being hauled into a police van. Apparently, they’re arresting every single person on the bridge no matter how long it takes, sweeping from the north to the south side of the bridge.

8:30 PM: Police steadily pick people off one by one, the drums beat ever louder. Camping is mostly happening in Hyde Park, I’m told.

1555415514767-ChrisBethell_extinctionnight-10
8:30 PM: Having seen several arrests now I’m feeling a little exposed, but see a small child clapping in time with the music and decide that I can handle this—I’m a climate fighter once more. I grab the nearest flag and get really pumped up, waving it to the thumping of the drums as I gaze in wonder at the moon and the stars above; this is for you Carl Sagan and your “lovely, lovely” Earth.

8:42 PM: Someone on the Extinction Rebellion WhatsApp says people are being asked to stop livestreaming or face arrest. I turn around to see a police officer recording me.

8:43 PM: Drumming on Waterloo Bridge is right next to the big steampunk heart (there’s a ten-foot steampunk heart sculpture on the bridge now) truly, I’m at the beating heart of the protest.

8:40 PM: Oh my God, is that Thom Yorke?! No, just a sweaty old man gesticulating wildly in the middle of Waterloo Bridge on a Monday evening.

1555415571191-ChrisBethell_extinctionnight-25
9:00 PM: Time to take in some of the radical speeches at the solar-powered stage: “…now I can see it is the ice in peril and we are in danger, standing by as parts of our word carve into the sea… sinking us all into oblivion… I ran my tongue to try and taste its ocean past which I discovered later at home in bed tastes the same as the salt we make with our bodies when we sweat or bleed or cry.”

9:05 PM: It’s the London One World Choir now: “you’re a vibration!” someone shouts from the crowd. Am I a vibration too?