German Geologist: Kids climate protests are ‘Emotional, Not Based On Fact’

German climate skepticism may have awakened, and ironically it may in large part be an unintended consequence of the “Greta demonstrations”. Germans may be finally getting fed up with the hysteria that has emptied out schools and turned into an ambush on their industrial jobs.

While the mainstream media focus almost exclusively on the ultra-alarmist climate scenarios, Lüning takes a far more moderate, non-alarmist view of climate and  man’s impact on it.

In Lüning’s view, natural factors play an as big, or even bigger. role on climate than humans do.

In the interview, Lüning explains how the assumptions made by the CO2 alarmists fall apart when tested against the observations of the past. The experienced German geologist explains why the modern 20th century warming is nothing unusual and that the same has already occurred numerous times over the past 10,000 years.

Start of industrialization coincided with end of Little Ice Age

One problem, Lüning says, is that scientists like to begin their temperature charts right before industrialization began in earnest, which happens to coincide near the temperature low point of the Holocene. He says that the term “pre-industrial” has been the source of “lots of confusion”. 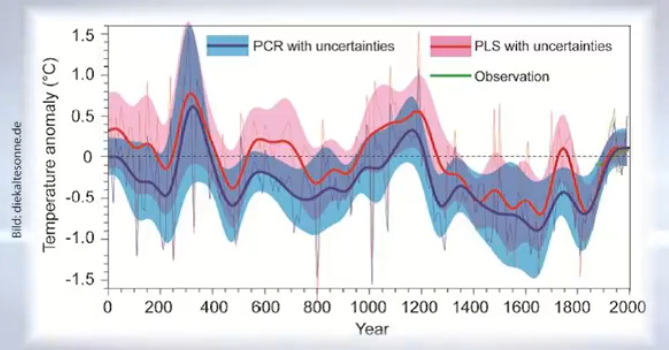 Lüning reminds listeners that the question concerning how much of the recent warming can be attributed to man is still being hotly debated, and that we know that natural factors have always been in the driver’s seat in the past. Personally Lüning believes that the real figure is closer to 50-50, with a likelihood that natural factors are a bit more than half.

He thinks the CO2-based climate models so far have been unable to explain the climate variability of the past, but that those based on natural factors and the past changes are far better.

On the claims that there is a 97% consensus among climate scientists that man is now driving the climate, the geologist – who is also co-author  of the book: The Neglected Sun – says that claim is totally misleading:

The study is often cited, but unfortunately misunderstood. If you look closely at the study, then you quickly see that it has to do with a completely different question. That Co2 drives warming, most people – even the large majority skeptics – concede CO2 warms, but it gets down to the question of how much. […] All those who think it’s just a little bit get also lumped into the 97%. I’m in the 97%. Donald Trump is a part of the 97%, as he recently said that it is possible that CO2 warms.”

Next Junge Freiheit (JF TV)  asks if a one-degree temperature rise would be so bad. “Is today’s temperature worse than the level of 1850?”

Lüning replies, reminding us that 1850 was the Little Ice Age and how it was “really a difficult time”. Lüning added:

We had crop failures. We had cold. We had disease. We really should appreciate that we no longer live in the Little Ice Age because that one degree of warming was urgently needed. No one would want to go back to this cold period.”

Concerning another 1°C of warming ahead, he says that it would not be only bad news. “There would be winners and there would be losers.” He points out that especially Canada and Siberia would profit.

Lüning is also critical of the “Greta demonstrations” which he says “have moved the discussion from a factual one to one that is emotional”. He adds: “It’s good that the youth are getting involved, but they should return to school and learn physics, chemistry and geography and all the fundamentals of climate science.”

Lüning also sharply criticizes the press, saying the issue has been “strongly filtered”:

Everything that is negative gets sold as headlines. And things like it’s been cooling for the last 3 years naturally get no headlines. What gets reported is very selective.”

Lüning calls the media “filtering” a fundamental problem that should not be happening in the 21st century.

When asked if the the published science is as imbalanced as the media, Lüning responds: “Not at all.” He says a new (non-alarming study) comes out almost daily, but the media refuse to report on it and instead they “prefer to report on alarmist ones, particularly from an institute located close to Berlin.”

Finally, when asked if we need to worry about the planet going under, as many projections range from manageable to catastrophic conditions ahead:

I see very many indications showing that it’s going be at the lower end of the range, towards manageable. That doesn’t mean we don’t need to do anything. But we don’t need to be preparing for the worst case scenario.”

In Lüning’s view, the path is very long and it should be taken one step at a time. He also tells JF-TV that climate science is still poorly understood and that more research needs to be done. He sees no need to hysterically put the entire economic system in question.

On a positive note, since the JF-TV interview was released on Youtube just 2 days ago, it has been viewed already almost 50,000 times. For a German climate skeptic video, this is nothing short of phenomenal!

Perhaps in Germany it’s one thing to protest climate change, but maybe people are now getting fed up with kids not going to school and instead irrationally turning the discussion into a hysteria.

I asked Dr. Lüning what he thought about the video getting so many views. His reply by email:

People want to see a more balanced climate discussion, involving all views, not just the most extreme alarm scenarios.”

Germans are also starting to get fed up with the onslaught on their industry and jobs.