by P Gosselin / Mar 30, 2019
A new study has just come out in the journal Earth and Planetary Science Letters: Biomarkers reveal abrupt switches in hydroclimate during the last glacial in southern California. 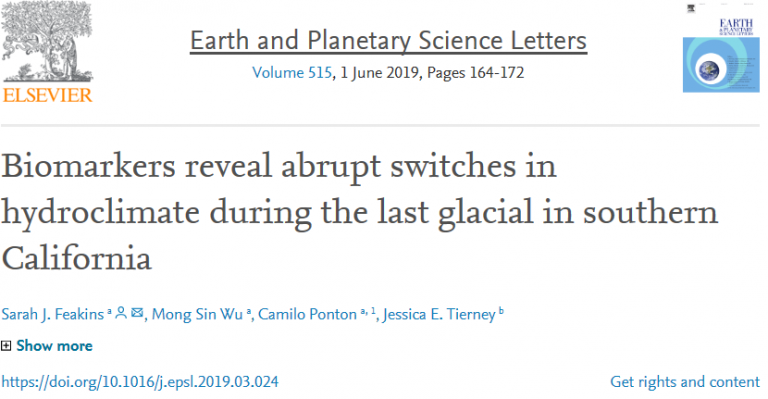 It contradicts claims often made by global warming alarmists that the perceived California climate change is unusual, and that it is mostly due to man emitting “climate gases” into the atmosphere.

The new study finds that California’s climate has always been extreme roller coaster-like – even when atmospheric CO2 was at very low levels (ca. 200 ppm), as was the case during the last ice age.

What follows is the paper’s abstract:

Reconstructions of past hydroclimate provide a means to understand precipitation responses to global ocean-atmosphere climate dynamics beyond the scope of that in the instrumental record.

Late glacial climate was characterized by abrupt variability in ice and ocean dynamics, however the implications for hydroclimate are not as well known. Here we present organic geochemical proxy evidence for precipitation isotopes based on plant leaf wax hydrogen isotopic compositions (δDwax) and temperature proxy evidence based upon the branched glycerol dialkyl glycerol tetraethers (brGDGTs), that derive from the membrane lipids of bacteria, each extracted from a sedimentary archive in Lake Elsinore, California spanning 32–9 ka. We add proxy evidence for vegetation and salinity from additional biomarker analyses and compare to prior pollen and sedimentological evidence from the same core.

Our record indicates a strong deglacial warming of 10 °C in Lake Elsinore (beginning at 14.5 ka) that accompanied a D-enrichment of precipitation of +90‰ and more C4vegetation (12–10 ka), after a cold, wet and C3-dominated phase (20–14.5 ka), indicating winter-dominated precipitation during the Last Glacial Maximum and Heinrich Stadial 1. During the late glacial (32–20 ka) we find abrupt variability, with precipitation isotopic shifts (∼70‰) that are independent of temperature swings implicating changes in storm track, rather than local temperature as drivers of the precipitation isotope signal.Temperature is however not irrelevant for hydroclimate: we find extreme warmth at 29.4 ka and 26.8 ka, the latter coincident with existing reports of an extended dry period (27.5–25.5 ka), suggesting a long hot and dry interlude during the generally cooler glacial period. We compare δDwax with speleothem δ18O from Nevada, also within the winter-dominated precipitation region. Our results corroborate the Last Glacial Maximum and deglacial signals, and fill gaps revealing storm-track instability from 32–20 ka,however the pacing and magnitude of the biomarker signals merit cautious interpretation.”

Surprise, surprise – California’s climate has always been on the very wild side. Low CO2 did not tame it at all.