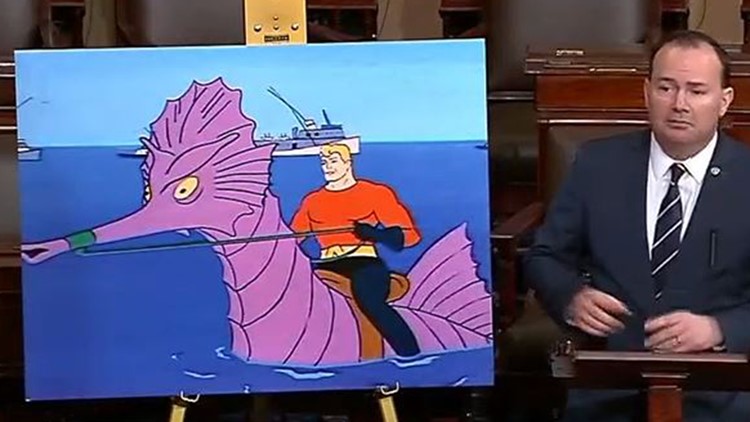 Sen. Mike Lee of Utah admitted his arguments were in jest, and suggested the answer to climate change is getting married and having babies.
Author: TRAVIS PITTMAN, TEGNA and MATTHEW DALY Associated Press
Published: 2:49 AM PDT March 27, 2019
Updated: 4:00 AM PDT March 27, 2019

A Republican U.S. senator on Tuesday used images of Ronald Reagan riding a velociraptor, Luke Skywalker on a Tauntaun, Aquaman on a seahorse and the movie “Sharknado 4” to mock the Green New Deal, a Democratic initiative to combat climate change.

Democratic sponsors say the plan is necessary to avoid what could be irreversible climate change,  while Republican critics have said it’s not a legitimate plan and would be too expensive.

Before a vote on the Senate floor, Sen. Mike Lee, R-Utah, brought along the unusual visual aids. He admitted that he considered his arguments ridiculous, but he said it was an appropriate response to a plan that he believes is not serious.

“There isn’t a single serious idea here. Not one,” Lee said.

One poster Lee displayed depicted President Ronald Reagan shooting a machine gun while riding a dinosaur that was holding a U.S. flag. The outlandish image was intended to illustrate the U.S. winning the Cold War, Lee said, but its fictional nature served a purpose: “Because this image has as much to do with overcoming communism in the 20th century as the Green New Deal has to do with overcoming climate change in the 21st,” he said. 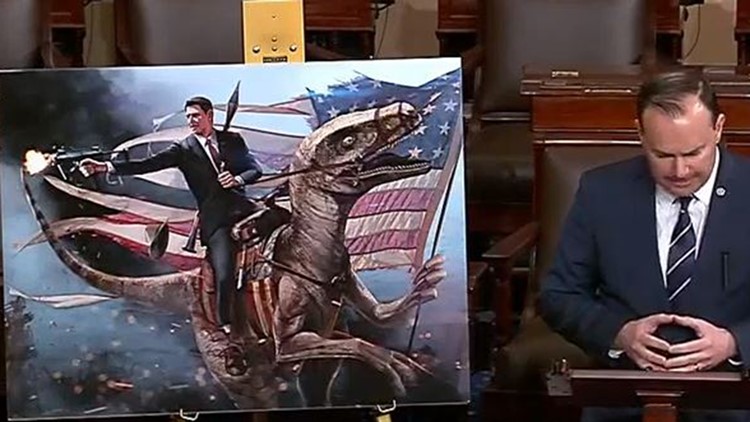 Sen. Mike Lee, R-Utah, shows an image of President Ronald Reagan on a velociraptor to debate against the Green New Deal, March 26, 2019.
C-SPAN

Lee also pounced on the suggestion that the Green New Deal called for eliminating air travel. That comes from an early outline that stated in an FAQ, “We set a goal to get to net-zero, rather than zero emissions, in 10 years because we aren’t sure that we’ll be able to fully get rid of farting cows and airplanes that fast.” A staffer for bill sponsor Rep. Alexandria Ocasio-Cortez, D-N.Y., later said that was an early draft that was leaked.

Lee suggested that without air travel, people wanting to visit Alaska would have to ride Tauntauns. Those are fictional creatures from the ice planet Hoth in “Star Wars: The Empire Strikes Back.” 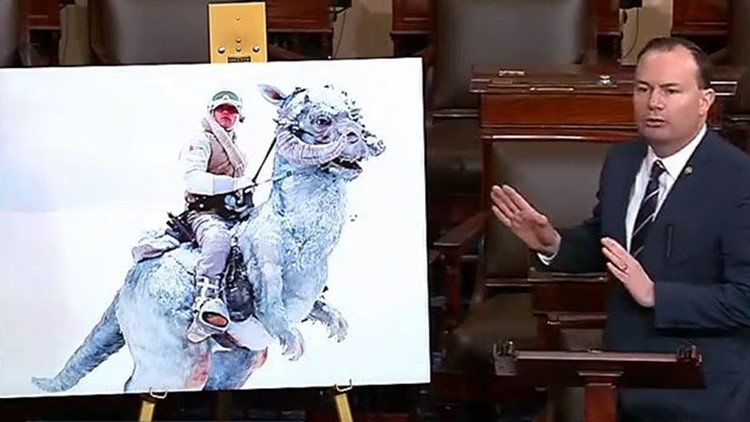 Sen. Mike Lee, R-Utah, shows an image of Luke Skywalker on a Tauntaun to debate against the Green New Deal, March 26, 2019.
C-SPAN

Lee stayed on that tangent, suggesting that people trying to get to and from Hawaii would have to ride giant seahorses. He then showed a cartoon image of the superhero Aquaman riding such a creature.

Sen. Mike Lee, R-Utah, displays a picture of Aquaman on the floor of the U.S. Senate during debate on the Green New Deal, March 26, 2019.
C-SPAN

He then highlighted the Syfy Channel film “Sharknado 4” and a scene from the movie showing how climate change brought a fictional tornado filled with sharks hit Lee’s state of Utah.

Lee concluded by saying the solution to climate change can’t be found in government but in churches and families.

“This is the real solution to climate change: babies,” Lee said, pointing to a photo of six babies. He suggested that with more humans, there are more opportunities to come up with innovation.

“The solution to so many of our problems, at all times, and in all places is to fall in love, get married and have some kids” Lee said.

Lee’s remarks enraged Democrats, who called climate change deadly serious, citing floods in the Midwest, wildfires in the West and hurricanes in the South.

“Climate change is not a joke,” said Sen. Ed Markey, D-Mass., the resolution’s lead Senate author. “Mocking it is shameful.”

Ocasio-Cortez, the lead House author, trolled Lee’s argument on Twitter. “If this guy can be Senator, you can do anything,” she wrote to her 3.7 million followers.

Like many other women + working people, I occasionally suffer from impostor syndrome: those small moments, especially on hard days, where you wonder if the haters are right.

But then they do things like this to clear it right up.

If this guy can be Senator, you can do anything.

“The solution to climate change is not this unserious resolution…the solution to so many of our problems at all times and in all places is to fall in love, get married, and have some kids.” –@SenMikeLee on @AOC and @SenMarkey‘s Green New Deal

This is a real quote. 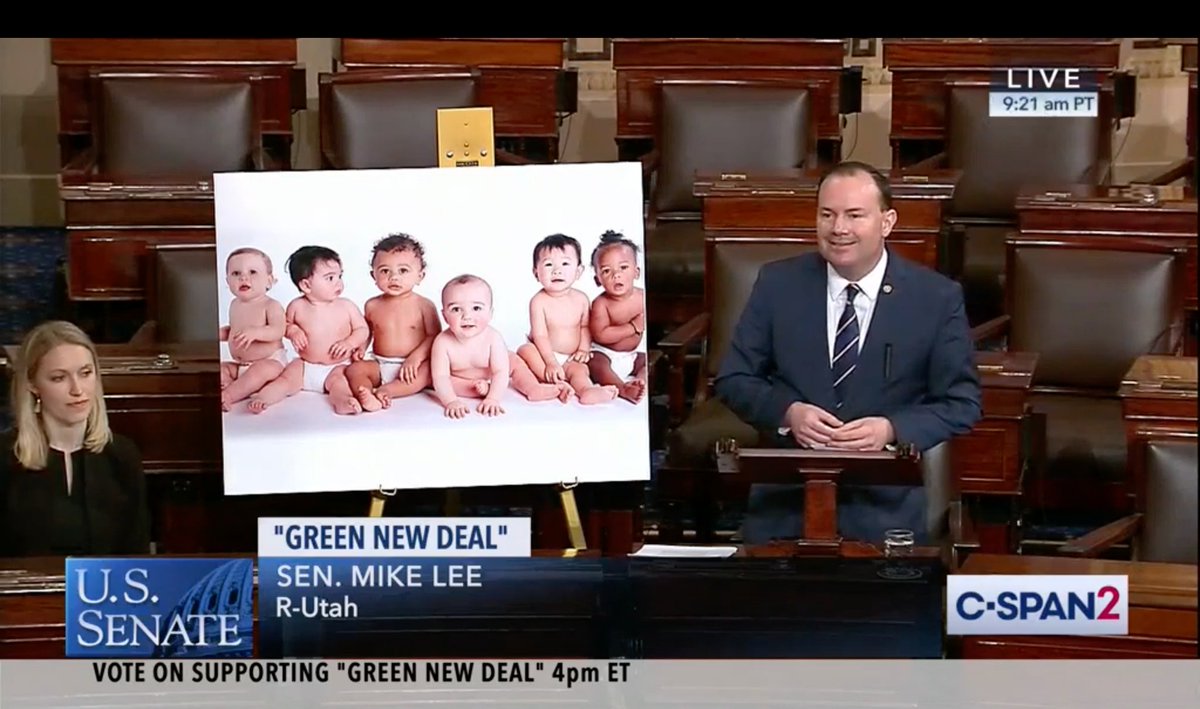 52.9K people are talking about this

Senators voted 57-0 Tuesday against a procedural motion to take up the nonbinding resolution.

Three Democrats and independent Sen. Angus King of Maine, who caucuses with Democrats, joined all 53 Senate Republicans in opposing the climate plan. Forty-three Democrats voted “present” to protest the GOP’s action. Democrats accused the GOP of quashing debate by blocking public hearings and expert testimony about the consequences of inaction on climate change.

The plan has broad support among Democratic activists, and all six of the 2020 presidential contenders serving in the Senate have signed on as co-sponsors, putting it at the forefront of the party’s sprawling primary race.

Republicans say the plan would devastate the economy and lead to a huge tax increase. They call it more evidence of the creep of “socialism” in the Democratic Party, along with “Medicare for All” and a sweeping elections reform package that would allow public financing of congressional campaigns.

Senate Majority Leader Mitch McConnell of Kentucky scheduled Tuesday’s vote, saying it would force Democrats to take a stand on a plan that “might sound like a neat idea in places like San Francisco or New York” but would result in communities across the country being “absolutely crushed.”