Many of us experienced shock, anger, and disbelief upon discovering that some of the most despotic regimes in written record literally erased dissidents from history. Stalin’s mass murder included the erasure of one-time allies such as his former head of secret police Nikolai Yezhov. Hitler’s terror campaign included the erasure of propaganda minister Joseph Goebbels – both of whom were expunged from written history and photographs as well. There’s something primal, something instinctively disturbing, about the idea that people with political power can negate your very existence and all for which you worked. And many of us in America felt relief that, as the saying goes, “It couldn’t happen here.”

It’s happening here, now, and, as one might expect, it is being done by left-collectivists.

On March 16, ClimateDepot.com’s Marc Morano reported that Patrick Moore, one of the founders of environmentalist movement Greenpeace, was no longer registering as such in Google searches, and was no longer listed as such on Greenpeace’s official website.

In fact, Moore, himself, noticed this, and Tweeted about it earlier that day, offering screenshots “before and after” the purge, and writing:

Oh my! @Google has removed my photo and name from the “Founders of @Greenpeace“. It was still there 2 days ago but now I am erased. Tech Tyranny!! 1st image a few days ago screen shot. 2nd image this morning. Both were Googled “Who are the founders of Greenpeace”

Now, why in the world would upright Google and Greenpeace engage in the dishonest tactics of collectivist terror regimes? 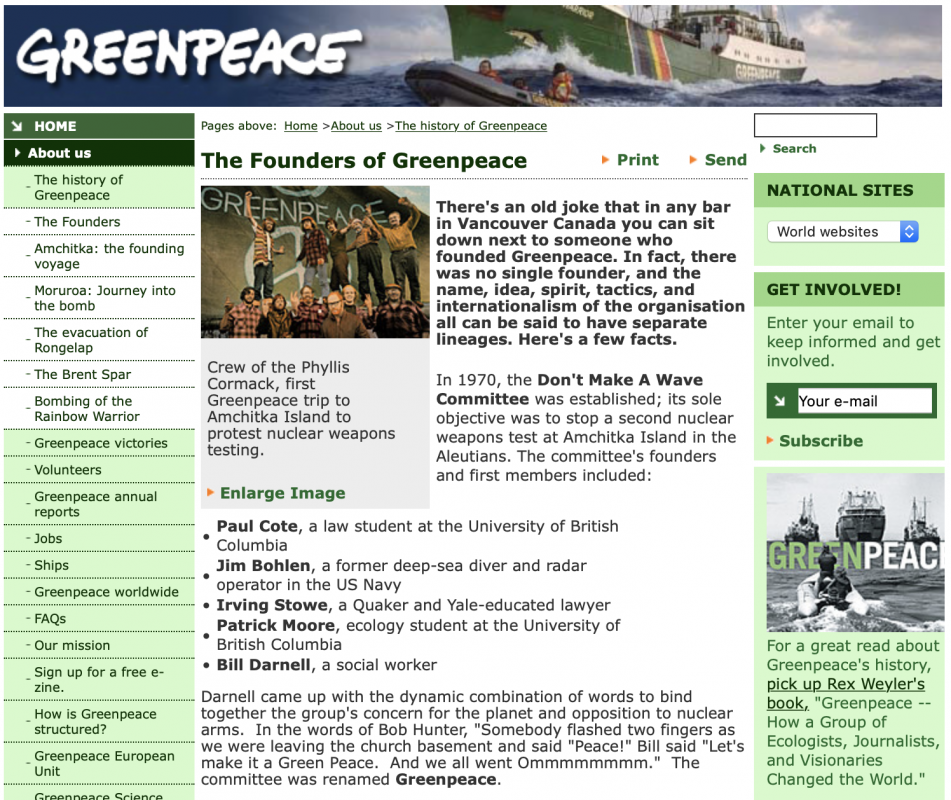 Perhaps they were responding to Moore’s March 7 unmasking of the “Climate Cult” in which he noted that there was a “fear campaign” by scientists who were “hooked on government grants”?

As Calvin Freiburger notes for LifeSiteNews, Moore was direct and unrelenting in his criticism of not only the sloppy science exhibited by many pushers of the “Catastrophic Anthropogenic Climate Change” theory, but also of the pop media and universities that are far too closely tied to political handouts pushing this collectivist pseudo-science.

There is a tone of righteous indignation and a sense of rebellion in Moore’s original interview for Brietbart’s News Tonight on SirusXM Radio:

Fear has been used all through history to gain control of people’s minds and wallets and all else, and the climate catastrophe is strictly a fear campaign…

And he was just getting warmed up. Writes Frieberger:

Moore argued that on top of ‘the green movement creating stories that instill fear in the public’ and the ‘media echo chamber … repeating it over and over and over again to everybody,’ the narrative is bolstered by ‘green politicians who are buying scientists with government money to produce fear for them in the form of scientific-looking materials’ and ‘the green businesses, the rent-seekers, and the crony capitalists who are taking advantage of massive subsidies, huge tax write-offs, and government mandates requiring their technologies to make a fortune on this.’

Which shows us something important about Moore: he understands economics. In the above, he mentions “rent-seeking”, which is an economic term not about people renting property, but about mercantilism, about special interests seeking to profit not by serving the customer in a free, competitive market, but profiting through political means, by getting government favors such as grants, bailouts, pork, or even artificial barriers to market entry (regulations, tariffs, fines, environmental mandates) erected against potential competition.

That’s very astute. And Moore has much more to say about politicized “science”, the politicized government-to-university grant system, and the mindless mantra of the media-politics duopoly:

‘And then, of course, you’ve got the scientists who are willingly, they’re basically hooked on government grants,’ he continued. ‘Most of the scientists — put it in quotes, “scientists” — who are pushing this catastrophic theory are getting paid by public money[.] … [M]ost of what these so-called scientists are doing is simply producing more fear so that politicians can use it to control people’s minds and get their votes because some of the people are convinced, ‘Oh, this politician can save my kid from certain doom.’

I have covered in numerous pieces for MRCTV examples of propagandistic manipulation and possible deception on the part of politically connected “researchers” pushing “Anthropogenic Climate Change” hysteria. And Freiberger mentions many of these as well.

AGW (Anthropogenic Global Warming) proponents suffered a blow in 2010 with the discovery that their leading researchers, such as East Anglia University’s Climate Research Unit and the Intergovernmental Panel on Climate Change, had engaged in widespread data manipulation, flawed climate models, misrepresentation of sources, and suppression of dissenting findings.

He also notes that the supposed “97% consensus” among climate scientists is a false claim cooked up by the Climate Cult.

But perhaps the best way to close this message about fighting propaganda with truth is from Moore himself.

‘This abomination that is occurring today in the climate issue is the biggest threat to the Enlightenment that has occurred since Galileo… Nothing else comes close to it. This is as bad a thing that has happened to science in the history of science. It’s taking over science with superstition and a kind of toxic combination of religion and political ideology. There is no truth to this. It is a complete hoax and scam.’

No wonder Greenpeace and Google want him to disappear from history. He’s a danger, an apostate. They’d rather employ Stalinist, Hitlerian, Orwellian tactics and erase him than have debate. In his novel, “1984”, George Orwell described the result of the Ministry of Truth turning someone into an “unperson”:

“He did not exist: he had never existed.”