"Using Nordhaus’s model assumptions, if the World as a whole fulfilled the Paris Climate Agreement collectively with optimal policies, then the world would be worse off than if it did nothing. That is due to most countries pursuing little or no actual climate mitigation policies. Within this context, pursuing any costly climate mitigation policies will make a country worse off than doing nothing. Assuming political leaders have the best interests of their country at heart, and regardless of whether they regard climate change a problem, the optimal policy strategy is to impose as little costly policy as possible for maximum appearance of being virtuous, whilst doing the upmost to get other countries to pursue costly mitigation policies." 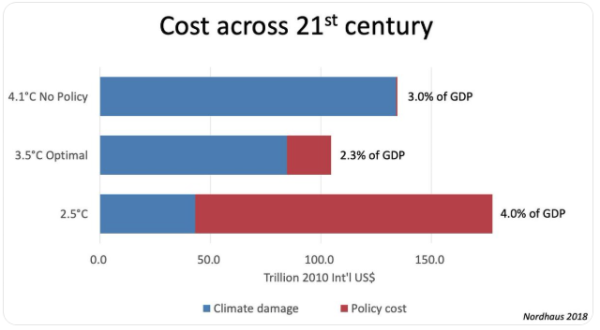 The paper citation is

The chart shows the optimal climate mitigation policy, based upon minimization of (a) the combined projected costs of climate mitigation policy and (b) residual net costs from human-caused climate change, is much closer to the non-policy option of 4.1°C than restraining warming to 2.5°C. By the assumptions of Nordhaus’s model greater warming constraint can only be achieved through much greater policy costs. The abstract concludes

The study confirms past estimates of likely rapid climate change over the next century if major climate-change policies are not taken. It suggests that it is unlikely that nations can achieve the 2°C target of international agreements, even if ambitious policies are introduced in the near term. The required carbon price needed to achieve current targets has risen over time as policies have been delayed.

A statement whose implications are ignored

This study is based on mainstream projections of greenhouse gas emissions and the resultant warming. Prof Nordhaus is in the climate mainstream, not a climate agnostic like myself. Given this, I find the opening statement interesting. (My bold)

Climate change remains the central environmental issue of today. While the Paris Agreement on climate change of 2015 (UN 2015) has been ratified, it is limited to voluntary emissions reductions for major countries, and the United States has withdrawn and indeed is moving backward. No binding agreement for emissions reductions is currently in place following the expiration of the Kyoto Protocol in 2012. Countries have agreed on a target temperature limit of 2°C, but this is far removed from actual policies, and is probably infeasible, as will be seen below.
The reality is that most countries are on a business-as-usual (BAU) trajectory of minimal policies to reduce their emissions; they are taking noncooperative policies that are in their national interest, but far from ones which would represent a global cooperative policy.

Although there is a paper agreement to constrain emissions commensurate with 2°C of warming, most countries are doing nothing – or next to nothing – to control their emissions. The real world situation is completely different to assumptions made in the model. The implications of this are skirted over by Nordhaus, but will be explored below.

The major results at the beginning of the paper are

SCC is the social cost of carbon. The conclusions about policy are not obtained from understating the projected costs of climate change. Yet the aim to limit warming to 2°C appears infeasible. By implication limiting warming beyond this – such as to 1.5°C – should not be considered by rational policy-makers. Even a target of 2.5°C requires special conditions to be fulfilled and still is less optimal than doing nothing. The conclusion from the paper without going any further is achieving the aims of the Paris Climate Agreement will make the world a worse place than doing nothing. The combined costs of policy and any residual costs of climate change will be much greater than the projected costs of climate change.

This outputs of a model are achieved by making a number of assumptions. When evaluating whether the model results are applicable to real world mitigation policy consideration needs to be given to whether those assumptions hold true, and the impact on policy if violated. I have picked some of the assumptions. The ones that are a direct or near direct quote, are in italics.

This list is far from exhaustive. For instance, it does not include assumptions about the discount rate, economic growth or emissions growth. However, the case against current climate mitigation policies, or proposed policies, can be made by consideration of the first four.

Implications of assumptions being violated

I am using a deliberately strong term for the assumptions not holding.

Clearly a policy is not optimal if it does not work, or even spends money to increase emissions. More subtle is using sub-optimal policies. For instance, raising the cost of electricity is less regressive the poor are compensated. As a result the emissions reductions are less, and there cost per tonne of CO2  mitigated rises. Or nuclear power is not favoured, so is replaced by a more expensive system of wind turbines and backup energy storage. These might be trivial issues if in general policy was focussed on the optimal policy of a universal carbon tax. No country is even close. Attempts to impose carbon taxes in France and Australia have proved deeply unpopular.

Given the current state of affairs described by Nordhaus in the introduction, the most violated assumption is that mitigation policy is not universally applied. Most countries have no effective climate mitigation policies, and very few have policies in place that are likely to result in any where near the huge global emission cuts required to achieve the 2°C warming limit. (The most recent estimate from the UNEP Emissions Gap Report 2018 is that global emissions need to be 25% lower in 2030 than in 2017). Thus globally the costs of unmitigated climate change will be close to the unmitigated 3% of GDP, with globally the policy costs being a small fraction of 1% of GDP. But a country that spends 1% of GDP on policy – even if that is optimal policy – will only see a miniscule reduction in its expected climate costs. Even the USA with about one seventh of global emissions, on Nordhaus’s assumptions efficiently spending 1% of output might expect future climate costs to fall by maybe 0.1%. The policy cost to mitigation cost for a country on its own is quite different to the entire world working collectively on similar policies. Assumption four of a reduction of 1.5% in global emissions illustrates the point in a slightly different way. If the USA started cutting its emissions by an additional 1.5% a year (they are falling without policy) then it would likely mean global emissions would keep on increasing.

The third assumption is another that is sufficient on its own to undermine climate mitigation. The UK and some States in America are pursuing what would be a less than 2°C pathway if it were universally applied. That means they are committing to a highly convex policy cost curve, (often made steeper by far from optimal policies) with virtually no benefits for future generations.

Best Policies under the model assumptions

The simplest alternative to climate mitigation policies could be to have no policies at all. However, if the climate change cost functions are a true representation, and given the current Paris Agreement this is not a viable option for those less thick-skinned than President Trump, or who have a majority who believe in climate change. Economic theory can provide some insights into the strategies to be employed. For instance if the climate cost curve is a quadratic as in Nordhaus (or steeper – in Stern I believe it was at least a quartic) there are rapidly diminishing returns to mitigation policies in terms of costs mitigated. For a politician who wants to serve their the simplest strategies are to

This implies that many political leaders who want to serve the best interests of their countries need to adopt a strategy of showing they are doing one thing to appear virtuous, whilst in reality doing something quite different.

In the countries dependent of extracting and exporting fossil fuels for a large part of their national income (e.g. the Gulf States, Russia, Kazakhstan, Turkmenistan etc.) different priorities and much higher marginal policy costs for global mitigation are present. In particular, if, as part of climate policies other countries were to shut down existing fossil fuel extraction, or fail to develop new sources of supply to a significant extent then market prices would rise, to the benefit of other producers.

Using Nordhaus’s model assumptions, if the World as a whole fulfilled the Paris Climate Agreement collectively with optimal policies, then the world would be worse off than if it did nothing. That is due to most countries pursuing little or no actual climate mitigation policies. Within this context, pursuing any costly climate mitigation policies will make a country worse off than doing nothing.

Assuming political leaders have the best interests of their country at heart, and regardless of whether they regard climate change a problem, the optimal policy strategy is to impose as little costly policy as possible for maximum appearance of being virtuous, whilst doing the upmost to get other countries to pursue costly mitigation policies.

I reached the conclusion that climate mitigation will always make a nation worse off ,using neoclassical graphical analysis, in October 2013.