Steve Milloy of Junkscience.com: "Will Happer is an esteemed Princeton physics prof who believes that CO2 is plant food and that climate hysteria is just that. To the NYTimes, however, he is no different than a Holocaust denier."

Marc Morano, author of “The Politically Incorrect Guide to Climate Change,” described “denialist” as a “semantic smear that links climate skeptics to ‘Holocaust deniers.’” “It’s about time the Trump administration is going to push back on the weak scientific claims of the climate-change establishment,” said Mr. Morano. “And they are no weaker than in the area of national security. Let’s hope this new commission and the elevation of Dr. Happer in the administration will herald a new pushback on the increasingly desperate claims of ‘settled’ science.” (See: Bonus chapter: Intimidating the ‘Deniers’ to Enforce the ‘Consensus’ – Climate ‘deniers’ threatened with being ‘thrown in jail’) 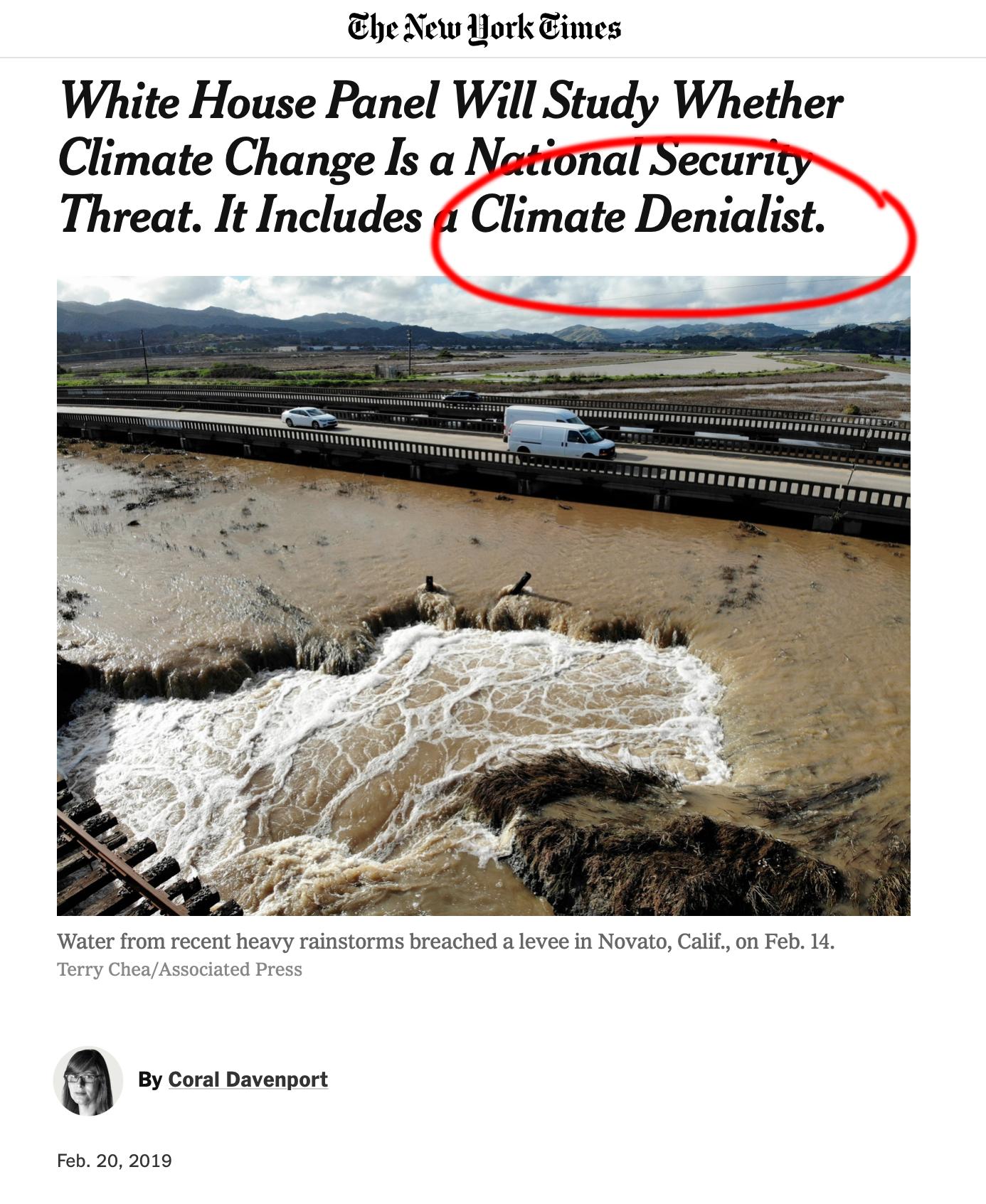 The headline prompted a backlash from those who object to applying a derogatory label associated with Holocaust disbelief to scientists and others who challenge worst-case climate-change scenarios.

Among those who bristled at the term was Roy Spencer, University of Alabama in Huntsville principal research scientist, NASA U.S. Science Team leader, and author of Amazon bestsellers such as “Inevitable Disaster: Why Hurricanes Can’t Be Blamed on Global Warming” (2017).

“Journalists using the ‘denialist’ label demean their profession,” said Mr. Spencer in an email. “None of the prominent skeptical scientists I know deny some level of recent warming, or humans as a contributing cause.”

Including Mr. Happer. “I know Will,” said Mr. Spencer. “Dr. Happer doesn’t deny that increasing CO2 might have some small influence on climate.”

He continued, “The question is the magnitude of the influence, whether the benefits of more CO2 are being ignored, and whether reducing CO2 substantially might well impoverish humanity.”

Will Happer is an esteemed Princeton physics prof who believes that CO2 is plant food and that climate hysteria is just that.

To the NYTimes, however, he is no different than a Holocaust denier.

Multiple media outlets reported Wednesday that Mr. Happer is spearheading the formation of a presidential committee on climate security, arguing that intelligence reports identifying climate change as a national-security threat “have not undergone a rigorous independent and adversarial scientific peer review.”

A meeting on the creation of the advisory committee is reportedly scheduled for Friday. Mr. Happer serves on the National Security Council as senior director for emerging technologies.

His involvement prompted a rash of criticism over whether the panel would be used to counter assessments such as the Pentagon’s January report saying that two-thirds of military installations face climate-related threats from flooding, drought or wildfire.

This president’s rejection of science and reason is a danger to us all. The Pentagon and intel community believe climate change poses a threat to our security, and including a climate denier on a sham panel to undermine those reports won’t change reality. https://mikebloom.bg/2TUjrLo

184 people are talking about this

“White House Panel Will Study Whether Climate Change is a National Security Threat. It Includes a Climate Denialist,” said the NYT headline.

From The Hill: “New White House special climate panel to include climate denier.”

Supporters pointed out that the 79-year-old Happer has enjoyed a long and distinguished career as a fellow of the American Physical Society, a member of the National Academy of Science and the JASON group, and a stint in the Bush 41 administration as Energy Department director of energy research.

“I have gotten to know Will Happer well over the past several years,” said the free-market Competitive Enterprise Institute’s Myron Ebell. “He is a man of great integrity and high attainments. Calling one of America’s most distinguished scientists a ‘denialist’ is just stupid.”

“It is a blanket condemnation of an individual so as to avoid discussing the substance of a person’s views on the issue,” said Mr. Pielke, who holds a Ph.D. in meteorology. “It is intended to denigrate someone. It is equivalent to calling a person a ‘heretic.’”

He also defended Mr. Happer’s bona fides. “I have met Will Happer and his scientific credentials are solid. For those who disagree with some of his conclusions, rather than insulting him, the discussion should be on the specific scientific questions,” Mr. Pielke said.

Critics have argued that Mr. Happer has “no formal training in climate science,” as his Wikipedia page says, although most scientists identified as climatologists hold degrees in geology, meteorology, physics or atmospheric sciences.

“He has some expertise in infrared radiation spectra, which is of some relevance to climate science, but he does not have formal training in climate science (nobody does really, it’s not really an academic discipline),” said Judith Curry, president of the Climate Forecast Applications Network, in an email.

“It’s about time the Trump administration is going to push back on the weak scientific claims of the climate-change establishment,” said Mr. Morano. “And they are no weaker than in the area of national security. Let’s hope this new commission and the elevation of Dr. Happer in the administration will herald a new pushback on the increasingly desperate claims of ‘settled’ science.”

Ms. Curry, a Georgia Tech professor emeritus who runs the Climate Etc. blog, said the panel should strive to incorporate a host of viewpoints.

“If the administration proceeds with this committee, it is important for there to be members with a range of perspectives,” she said. “It is also important to avoid activists on either side that clearly have a policy agenda regarding climate change.”