One of the reasons I’m resigned to never getting a column in a national newspaper is that even if you paid me loads I could never churn out commentary as lame as this:

If you have read or listened to some of the teenage campaigners this week or you have some of your own at home, it is clear that the slushy, drippy, apathetic “snowflakes” whom adults love to deride are more impressive, articulate and engaged than many MPs. They are also passionate about their causes rather than their future careers, unlike most of the cabinet.

One of their leaders, Anna Taylor, 17, is sensible rather than sensitive. She has done her homework, engaging with the facts of climate change rather than dismissing them as ‘project fear’ and unlike some of her elders, she doesn’t mock the notion of experts.

I shan’t embarrass the columnist by mentioning his or her name. Suffice to say that I find it difficult to conceive of a notion more air-headed, glib or culturally suicidal than this idea that there’s something admirable, noble or desirable about kids skiving off school to go on climate protests.

This is what thousands of schoolchildren across Britain will be doing this Friday as part of something called Youth Strike 4 Climate. (It was inspired by a pig-tailed Swedish child called Greta Thunberg, of whom more in a moment. Similar protests are being planned from Australia to the U.S.)

If any of my kids attended such an event I wouldn’t find my eyes misting over with pride like that silly columnist. I’d be absolutely bloody furious with them, even more so with their teachers.

Burning youthful zeal is a powerful force (which is why totalitarian states so love to exploit it: see, for example, the Hitler Youth; or the zealots who denounced their parents in Mao’s Cultural Revolution) – but almost by definition, it is wrongheaded and dangerous because frankly, kids don’t know squat. 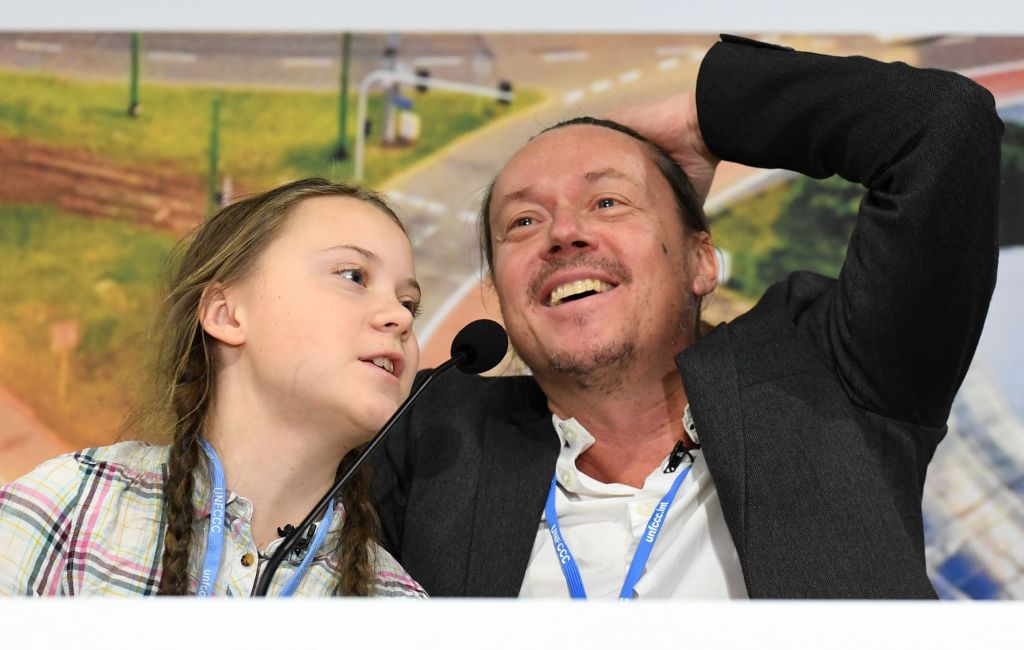 Swedish 15-year old climate activist, Greta Thunberg and her father Svante attend a press conference during the COP24 summit on climate change in Katowice, Poland, on December 04, 2018. – Greta decided to go on school strike every Friday in front of the Swedish parliament to get politicians to act on climate chance following Swedens hottest summer ever. (Photo by Janek SKARZYNSKI / AFP) (Photo credit should read JANEK SKARZYNSKI/AFP/Getty Images)

Not only have their frontal lobes yet to form – which means they are irrational and impulsive. But they have very limited experience of the real world (nor of its responsibilities) and what little they do know about it is largely dependent on what they’ve been fed by their teachers.

So there’s really nothing insightful about anything any child anywhere has to tell us about “climate change.” All it is is regurgitated drivel based on the alarmist nonsense they’ve been spoon-fed at school.

I love this idea – as per the stupid comment piece – that one of the leaders of Youth Strike 4 Climate has “done her homework” and engaged with “the facts of climate change.” Had she done so, she certainly wouldn’t be wasting time on the Youth Strike 4 Climate march. Instead, she’d be campaigning against bat-chomping bird-slicing eco-crucifixes and old grannies dying in fuel poverty because their electricity prices have been forced up by green tariffs and schools and universities brainwashing the young with eco-drivel when they could be teaching actual science.

The inspiration for Youth Strike 4 Climate was Greta Thunberg, a 16-year old Swedish girl with a Dorothy (from the Wizard of Oz) look of rustic innocence and an intense, urgent manner which have turned her into a viral internet star. Here she is giving a TED talk in December.

“When I was about eight years old I first heard about something called climate change or global warming. Apparently that was something humans had created by our way of life.”

She also spoke at the COP24 climate summit and at Davos, where she told a rapt audience:

We are facing a disaster of unspoken sufferings for enormous amounts of people. And now is not the time for speaking politely or focusing on what we can or cannot say. Now is the time to speak clearly.

Solving the climate crisis is the greatest and most complex challenge that Homo sapiens have ever faced. The main solution, however, is so simple that even a small child can understand it. We have to stop our emissions of greenhouse gases.

Miss Thurnberg’s certainty and controlled rage remind me of an infamous campaign produced by Greenpeace in 2007 at the height of the global warming scare. Nicknamed “Angry Kid” it showed a pale-faced boy in a hoodie resembling the Grim Reaper’s cowl, lecturing adults on the evils done to the planet by their selfish lifestyles.

Well, that kid must be in his mid-twenties now and not one of the doomsday scenarios he predicted has even remotely come to pass.

But anyone sensible watching the video even at the time it was released knew that the boy was talking out of his hat. He was just spouting propaganda which had been fed to him by cynical adults who believe – possibly with some justification – that green bullshit sounds more persuasive when it’s mouthed by some lad whose balls haven’t yet dropped.

Whether it’s Greta Thunberg lecturing us on climate change or David Hogg lecturing us about gun control, I think there’s something deeply suspect about this exploitation of kids to advance a political agenda. Often as not, when you look behind the scenes, you find adults in the background pulling the strings.

This certainly appears to be the case with Miss Thunberg, who has Asperger’s Syndrome and OCD, as well as some pushy high-profile parents, one an opera singer and the other an actor. We know this thanks to an investigation by the Swiss magazine Die Weltwoche, described here in the Spectator by Andrew Montford.

Doubts were first raised when the Swiss magazine Weltwoche published an article last month entitled ‘We’re making a climate icon’. It revealed that Thunberg’s school strike had coincided neatly with the launch of a book about climate change written by her mother, Malena Ernman. Is this a coincidence? It looks less like one when you learn from the same article that the first publicity of Thunberg’s protest came via the social media of the book’s PR man, Ingmar Rentzhog, on the day of its launch. It seems that Rentzhog took a freelance photographer along to the school strike, later posting the pictures on his Facebook and video on his company’s YouTube channel.

Further worrying details have also emerged. As well as working for Greta’s mother, Rentzhog had also recently launched a business called ‘We Don’t Have Time’, a sort of climate-focused PR agency. In October 2018, he invited Greta to join the company’s Youth Advisory Board and in the weeks that followed he used her image intensively ahead of the company’s share issue. This seems to have been very successful, bringing in something short of a million pounds. But whatever the figure, Greta has proved to be an extraordinarily lucrative asset for Mr Rentzhog, and the environmental press has been extraordinarily helpful too.

Miss Thunberg appears a bright, articulate kid of whom any parent would be proud. But that doesn’t mean we should pay attention to a word she has to say about climate change because it’s exactly the kind half-baked, ill-informed, emotive, unscientific and utterly impractical tosh you’d expect to hear from a brainwashed 16-year old schoolgirl.