NASA: ‘The world is a greener place than it was 20 years ago’ – ‘Thanks to tree planting & agriculture’ 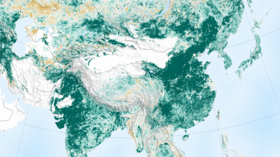 A multi-decade, high resolution study of the Earth’s surface has finally yielded some good news: the planet is a much greener place than it was in the mid ‘90s, and the source of this greening has surprised many.

The 20-year-long data record was produced by an instrument on board two satellites orbiting the planet and capturing up to four shots of every place on Earth every day for the last 20 years.

As a result, the data set is staggering in size, but positive in message: as a species, we have ‘greened’ an area equivalent to that of all the Amazon rainforests, at a rate of more than two million square miles of extra green leaf area per year (or a roughly five percent increase compared to the early 2000s).

And the unexpected source for much of this new greenery? China and India.

Over the last two decades, the Earth has seen an increase in foliage around the planet, measured in average leaf area per year on plants and trees. Data from NASA satellites shows that China and India are leading the increase in greening on land. The effect stems mainly from ambitious tree planting programs in China and intensive agriculture in both countries. 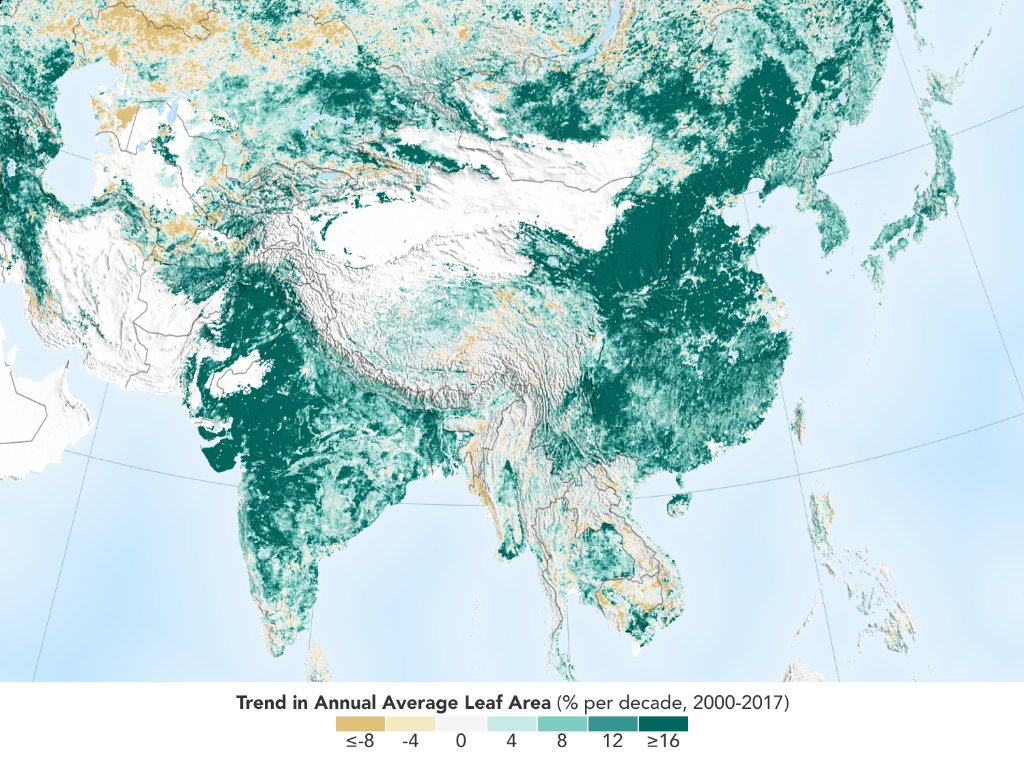 Good news for green thumbs: The world is a greener place than it was 20 years ago.

Data from @NASAEarth satellites shows that human activity in China and India dominate this greening of the planet, thanks to tree planting & agriculture. Get the data: https://go.nasa.gov/2N10aW6

In the late 80s, both global powerhouses noticed that soil and air quality was decreasing, and they would need to do something drastic to sustain their ever-growing populations. China began highly ambitious tree planting programs, and both countries launched intensive agriculture programs.

ALSO ON RT.COM‘Brilliant!’ Trump applauds Democrats’ Green dream to ‘eliminate all planes, cars, cows & military’According to the study, 42 percent of China’s greening was due to conservation and reforestation efforts aimed at curbing soil erosion, air pollution and climate change. An additional 32 percent (and 82 percent in India) was due to cultivation of food crops to feed their massive, and rising, population.

The greening saw qualitative increases as well, as Chinese production of grains, vegetables, fruits has increased by about 35-40 percent since 2000.

“But, now that we know direct human influence is a key driver of the greening Earth, we need to factor this into our climate models,” Rama Nemani, a research scientist at NASA’s Ames Research Center, in California’s Silicon Valley, and a co-author of the new work said.

ALSO ON RT.COMElectric cars will kill oil demand within decade, Bank of America predictsThe team were quick to point out that it’s not all good news: while the surprising results make for a welcome update, they do not offset the damage from loss of natural vegetation in tropical regions, such as Brazil and Indonesia, most notably in terms of biodiversity and irrevocable species loss.

The teams findings were published in the journal Nature Sustainability on February 11.