New Science: 89% Of The Globe’s Islands – And 100% Of Large Islands – Have Stable Or Growing Coasts 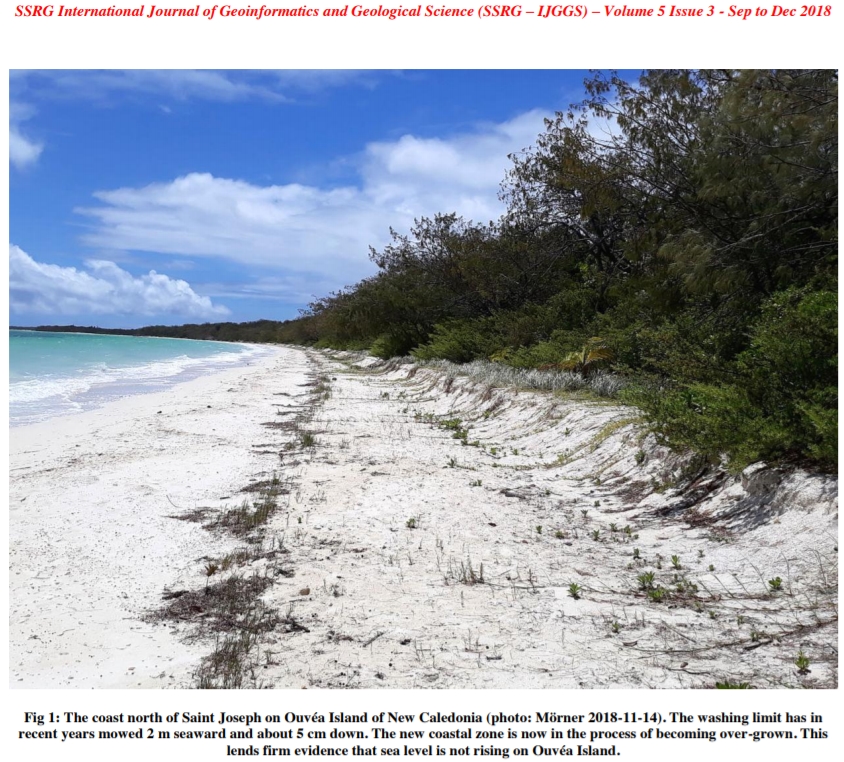 “Over the past decades, atoll islands exhibited no widespread sign of physical destabilization in the face of sea-level rise. 88.6% of islands were either stable or increased in area, while only 11.4% contracted. It is noteworthy that no island larger than 10 ha decreased in size. These results show that atoll and island areal stability is a global trend, whatever the rate of sea-level rise.”- Duvat, 2019 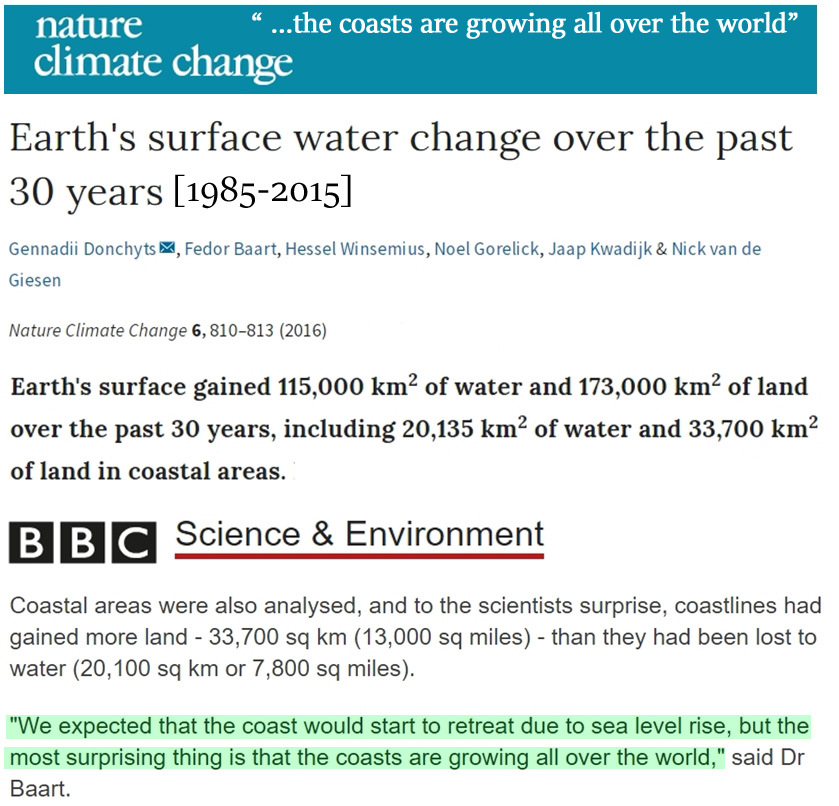 I. Despite sea level rise, “the coasts are growing all over the world”

Satellite observations indicate there has been 13,565 km2 of net growth in land area across the globe’s coasts between 1985-2015.

In other words, the Earth’s coasts gained more land area than were lost to rising sea levels.

“This paper draws upon the application of GIS and remote sensing techniques to investigate the dynamic nature and management aspects of land in the coastal areas of Bangladesh. … This research reveals that the rate of accretion [coastal land growth] in the study area is slightly higher than the rate of erosion. Overall land dynamics indicate a net gain of 237 km2 (7.9 km2annual average) of land in the area for the whole period from 1985 to 2015.”  (Ahmed et al., 2018) 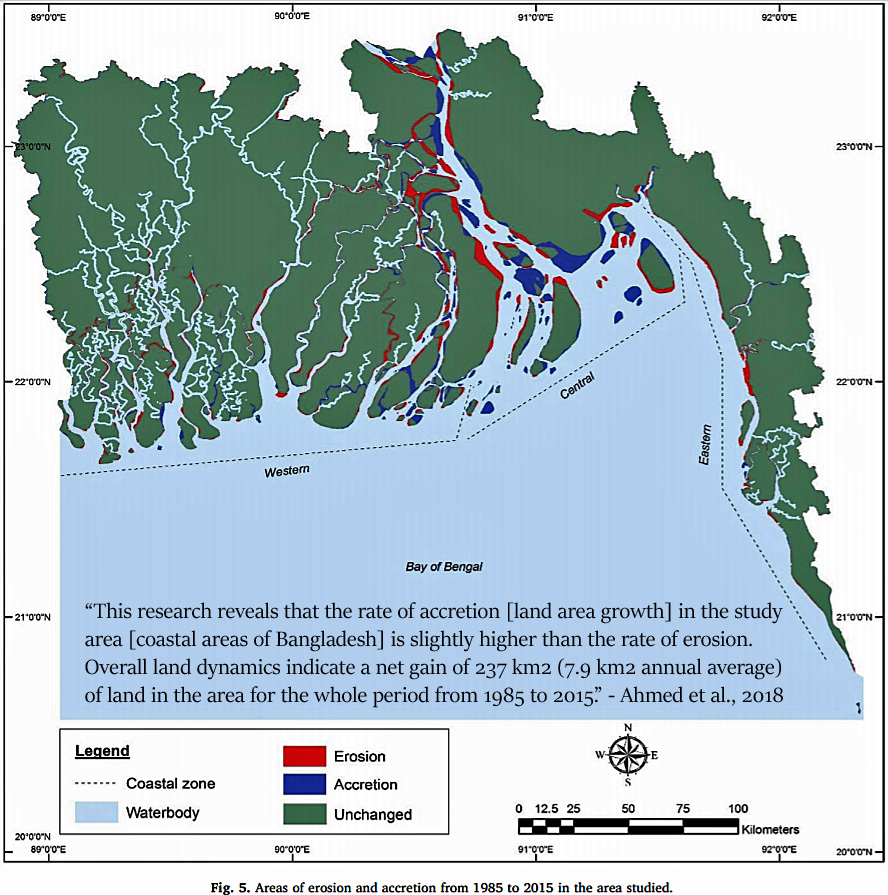 Ice melt from Greenland and Antarctica contributed a grand total of 1.5 cm of the 7.9 cm (3.1 inches) of sea level rise during those 56 years.

However, there are regions of the world where sea levels are rising at rates two or three times the global average.  Tuvalu, representing over 100 islands located in the central west Pacific, has  undergone “twice the global average” rate of sea level rise (~3.90 ± 0.4 mm yr−1) since the 1970s.

It would be expected that such high rates of local sea level change would result in shrinking island coasts and overall land area during this period.

But the opposite has occurred.  There has been a net increase in the coastal land area of Tuvalu between 1971-2014 in 8 of 9 atolls.

“We specifically examine spatial differences in island behaviour, of all 101 islands in Tuvalu, over the past four decades (1971–2014), a period in which local sea level has risen at twice the global average. Surprisingly, we show that all islands have changed and that the dominant mode of change has been island expansion, which has increased the land area of the nation.”

“Using remotely sensed data, change is analysed over the past four decades, a period when local sea level has risen at twice the global average (~3.90 ± 0.4 mm yr−1). Results highlight a net increase in land area in Tuvalu of 73.5 ha (2.9%), despite sea-level rise, and land area increase in eight of nine atolls.”(Kench et al., 2018)

III. The stability or coastal net growth of islands in recent decades to century “is a global trend”

Coastal stability and expansion for atoll and island land area is not just a regional trend, but a global one.

A comprehensive (709 islands) review of coastal changes that have been observed in the last decades to century (Duvat, 2019) reveals that no atoll island destabilization has occurred due to the effects of rising sea levels.

In fact, 88.6% of the globe’s islands have coasts that are either stable or expanding in size.

None of these observed trends affirm the popularized claim that modern sea level rise is currently threatening the globe’s coasts.

A global assessment of atoll island

planform changes over the past decades 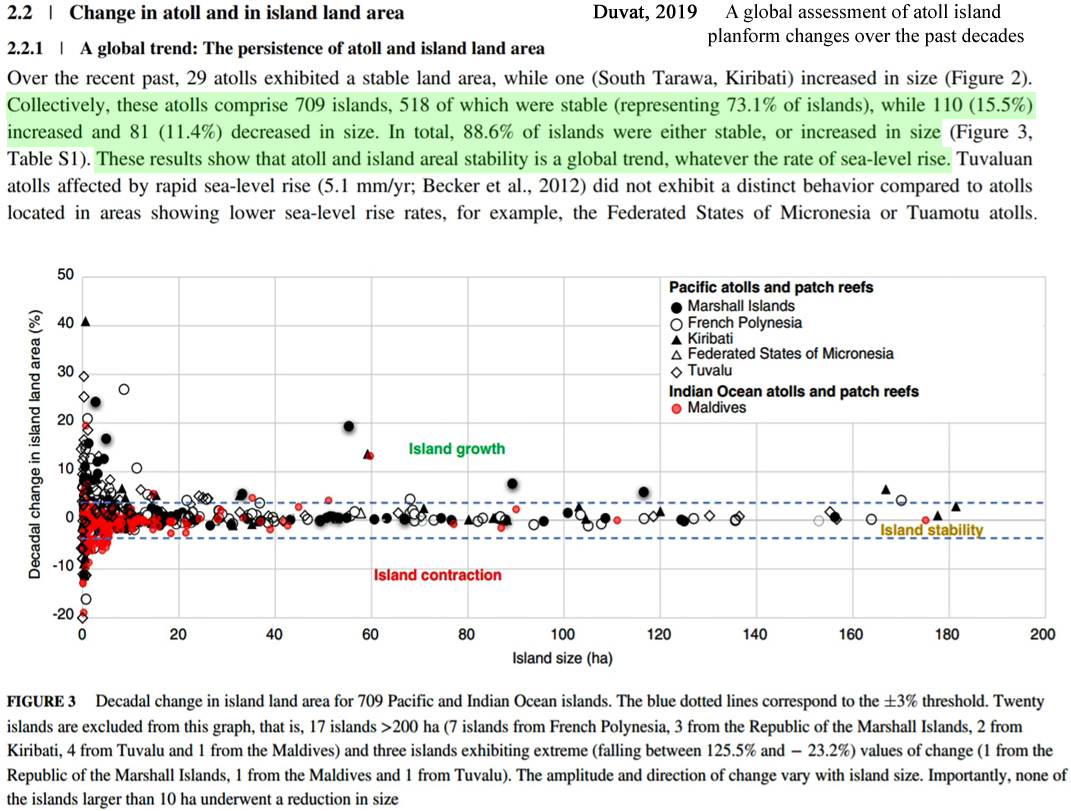 “This review first confirms that over the past decades to century, atoll islands exhibited no widespread sign of physical destabilization by sea level rise. The global sample considered in this paper, which includes 30 atolls and 709 islands, reveals that atolls did not lose land area, and that 73.1% of islands were stable in land area, including most settled islands, while 15.5% of islands increased and 11.4% decreased in size. Atoll and island areal stability can therefore be considered as a global trend.”

“Importantly, islands located in ocean regions affected by rapid sea-level rise showed neither contraction nor marked shoreline retreat, which indicates that they may not be affected yet by the presumably negative, that is, erosive, impact of sea-level rise.”

“It is noteworthy that no island larger than 10 ha decreased in size, making this value a relevant threshold to define atoll island areal stability.”

“[A]mong the 27 islands having a land area lying between 100 and 200 ha (9 in French Polynesia, 6 in the Marshall Islands, 6 in Kiribati, 5 in Tuvalu and 1 in the Federated States of Micronesia), only 3 increased in area, while 24 were stable.”

“The great majority of Pacific islands showed positional stability, as illustrated by the Tuamotu atolls, where 85–100% of islands were stable, depending on atolls (Duvat & Pillet, 2017; Duvat, Salvat, et al., 2017).”

“Importantly, the reanalysis of available data on atoll island planform change indicates that over the past decades to century, no island larger than 10 ha and only 4 out of the 334 islands larger than 5 ha (i.e., 1.2%) underwent a reduction in size.”

IV. Sea level rise is not the coastal threat that natural geological processes are

Rapid sea level rise rates due to global warming are not the threat to coastal communities and wildlife that they have often been claimed to be.  What is?  Natural geological/crustal changes, or vertical land movement.

Tied to the Earth’s gravitational attraction and shifting plates, geologic subsidence (land sinking) or uplift (land rising) processes are far more of a determinant of coastal structure and positioning than the rather small (by comparison) seawater volume changes in the world’s ocean basins.  This is why sea level rise (or fall) rates are local, not global, as they vary quite dramatically across the world.

Along the coast of Juneau, Alaska, for example, the land surface has been rapidly rising due to gravitational uplift for many decades.  Consequently, relative sea levels are plummeting in this region at a rate of over -13 mm yr−1 (minus-5 inches per decade) according to NOAA.

The opposite is occurring along the U.S. Gulf coast (Grand Isle, Louisiana), where the land area is sinking and thus sea levels are rising at a rate of over +9 mm yr−1.

Scientists have concluded that “sea level rise is not the primary factor controlling the shoreline changes” in regions where sea levels are rapidly rising (Testut et al., 2016).   Even localized rates of sea level rise as high as 5 mm yr−1 are not rapid enough to overcome the much more pronounced geologic changes (accretion and uplift).

“We show that Grande Glorieuse Island has increased in area by 7.5 ha between 1989 and 2003, predominantly as a result of shoreline accretion [growth]: accretion occurred over 47% of shoreline length, whereas 26% was stable and 28% was eroded. Topographic transects and field observations show that the accretion is due to sediment transfer from the reef outer slopes to the reef flat and then to the beach. This accretion occurred in a context of sea level rise: sea level has risen by about 6 cm in the last twenty years and the island height is probably stable or very slowly subsiding. This island expansion during a period of rising sea level demonstrates that sea level rise is not the primary factor controlling the shoreline changes. This paper highlights the key role of non-climate factors in changes in island area, especially sediment availability and transport.”  (Testut et al., 2016)

Along the eastern coast of the U.S., Piecuch and colleagues (2018) find that the “dominant control” over the disparate rates of sea level rise during the modern era has been exerted by “vertical motions of the Earth’s crust”, not climate.

“Here we analyse instrumental data and proxy reconstructions using probabilistic methods to show that vertical motions of Earth’s crust exerted the dominant control on regional spatial differences in relative sea-level trends along the US East Coast during 1900–2017, explaining most of the large-scale spatial variance.”

“Rates of coastal subsidence caused by ongoing relaxation of the peripheral forebulge associated with the last deglaciation are strongest near North Carolina, Maryland and Virginia [locations where the sea level rise rates are highest]. Such structure indicates that Earth’s elastic lithosphere is thicker than has been assumed in other models. We also find a substantial coastal gradient in relative sea-level trends over this period that is unrelated to deglaciation and suggests contributions from twentieth-century redistribution of ice and water. Our results indicate that the majority of large-scale spatial variation in long-term rates of relative sea-level rise on the US East Coast is due to geological processes that will persist at similar rates for centuries.”

In a 2018 paper published in the journal Geoscience Frontiers, geophysicist and tectonics expert Dr. Aftab Khan asserts that “both regional and local sea-level rise and fall in meter-scale is related to the geologic events only and not related to global warming and/or polar ice melt.”

The conclusion that rapid and high-amplitude (i.e., meters-per-century) sea level changes occur primarily as a consequence of natural geologic processes effectively leaves no room for global warming and/or polar ice melt to significantly contribute to the alarming meters-per-century sea level rise projected to engulf the Earth’s coasts by the end of the century.

Suggestions of a controlling anthropogenic influence on coastal and shoreline changes — the scariest aspect of climate modeling predictions — may therefore be significantly undermined by real-world scientific observations.

Why would sea-level rise for global

“Geophysical shape of the earth is the fundamental component of the global sea level distribution. Global warming and ice-melt, although a reality, would not contribute to sea-level rise. Gravitational attraction of the earth plays a dominant role against sea level rise.”

“Geological processes are responsible of two types of major movements of the crustal block viz., uplift and subsidence. Hence, the relation of sea level and crustal motion is attributed to sea level drops when there is an uplift while it rises when there is subsidence.”

“Snay et al. (2016) have found large residual vertical velocities [land uplift], some with values exceeding 30 mm/yr, in southeastern Alaska. The uplift occurring here is due to present-day melting of glaciers and ice fields formed during the Little Ice Age glacial advance that occurred between 1550 A.D. and 1850 A.D.”

“Johansson et al. (2002) conducted research on a project BIFROST (Baseline Inferences for Fennoscandian Rebound Observations, Sea-level, and Tectonics) that combines networks of continuously operating GPS receivers in Sweden and Finland to measure ongoing crustal deformation due to glacial isostatic adjustment (GIA). They have found the maximum observed uplift rate 10 mm/yr for Fennoscandian region analyzing data between August 1993 and May 2000. Sella et al. (2007) and Lidberg et al. (2010) suggested that postglacial rebound continues today albeit very slowly wherein the land beneath the former ice sheets around Hudson Bay and central Scandinavia, is still rising by over a centimeter a year, while those regions which had bulged upwards around the ice sheet are subsiding such as the Baltic states and much of the eastern seaboard of North America.”

“Hence, both regional and local sea-level rise and fall in meter-scale is related to the geologic events only and not related to global warming and/or polar ice melt.”