by P Gosselin / Yesterday, 09:31
Chalk up another one for hypocrisy. Do as I say, not as I do! From Greenpeace.

Whenever someone else makes a “mistake”, do-gooder organizations like Greenpeace are quick to demand resignations, hefty penalties and punishment. Yet when these same organizations get caught doing wrong, they all claim how it was all a mistake, just a misunderstanding, an honest oversight, etc. and then plead for forgiveness, which they feel they alone are entitled to. 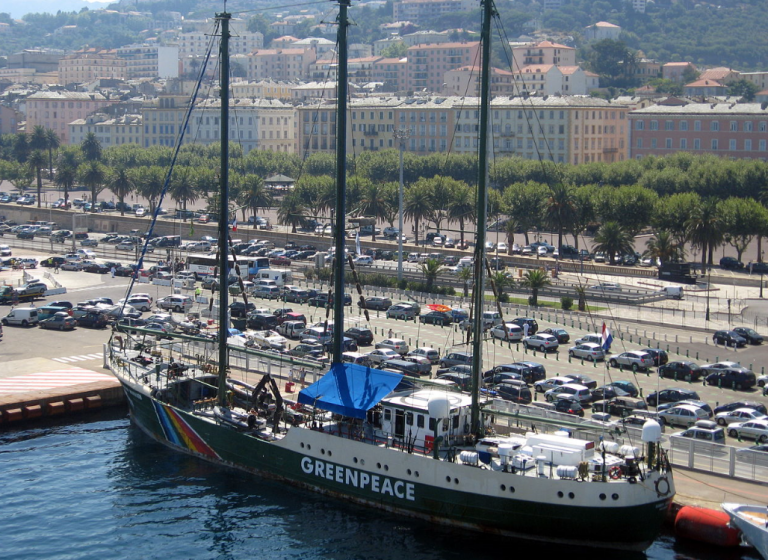 Greenpeace environmental protection ship winds up polluting the environment while being scrapped later on a Bangladeshi beach. Photo (2006): public domain.

Greenpeace has always been a harsh critic, and often justifiably so, of ship-scrapping under awful environmental, work and social conditions in third world countries like India or Bangladesh. So it’s surprising that Spiegel reports how the environmental protection organization has been caught breaking its own Commandments (probably to save money).

In a statement on the decommissioning of Rainbow Warrior II by Greenpeace International in Amsterdam, the organization wrote that they “made a mistake” in allowing the decommissioned ship “to be scrapped on a beaching yard in Bangladesh” in a way that “does not live up to the standards” they themselves have set.

The statement then explains how it was all just a big misunderstanding and that they “should have consulted” their partners in the NGO Shipbreaking Platform and the Basel Action Network,. “We did not. No excuse. We should have.”

In the statement there is no mention of any resignations or massive fines for their admitted environmental and social transgressions. The statement was not translated in German and did not appear at the German Greenpeace website (Germany is a generous donor to Greenpeace).

Whenever big corporations get caught doing similar mischief, Greenpeace is often the last to forgive and always first in line to demand consequences, reparations and punishment.

Unsafe, damaging to the marine environment

The practice of chopping up decommissioned ships like Rainbow Warrior II is often done on the beaches of third world countries where the task is “fundamentally unsafe, exploitative of workers and damaging to the marine environment”, Greenpeace says. Yet the high profile environmental organization could not be bothered to ensure a proper disposal of its own waste.

By the time Greenpeace had realized their mistake, they said it was too late because the ship had already been “beached and readied to be cut up”. The world leading environmental organization also added that they first “should have examined all options to have the ship decommissioned ‘off the beach’ and in a way that provides guarantees that all wastes generated will be managed in the most environmentally safe way possible.”

Greenpeace added that would seek to ensure that specific wastes that couldn’t be treated safely, ‘downstream’, in Bangladesh could be sent out of the country for management.”

Spiegel wrote that the affair has caused damage to Greenpeace’s reputation: The German news magazine wrote online: “Instead of making their own mistakes as transparent as possible, Greenpeace tries to minimize the damage as long as possible” and that it was “too late for controlling the damage”.

Spiegel also noted that global scrap dealer GMS who took over the Rainbow Warrior from Greenpeace issued a statement on November 14, i.e. just one day before the Greenpeace statement:

Greenpeace has finally recognized that safe and responsible recycling using the beaching method can be conducted in the Indian subcontinent and that Bangladesh specifically can be a green recycling destination.

Also read about Greenpeace and the NAZCA lines here.

For more info on shipbreaking, watch this video here.
Also here on the brutalities of shipbreaking in India.