CBS News on new federal climate report: "One chart in the study predicts that by 2100, drivers in parts of the country could spend more than 625 million hours a year in their vehicle, delayed on roads flooded by high tides... More mental health problems – and murders" 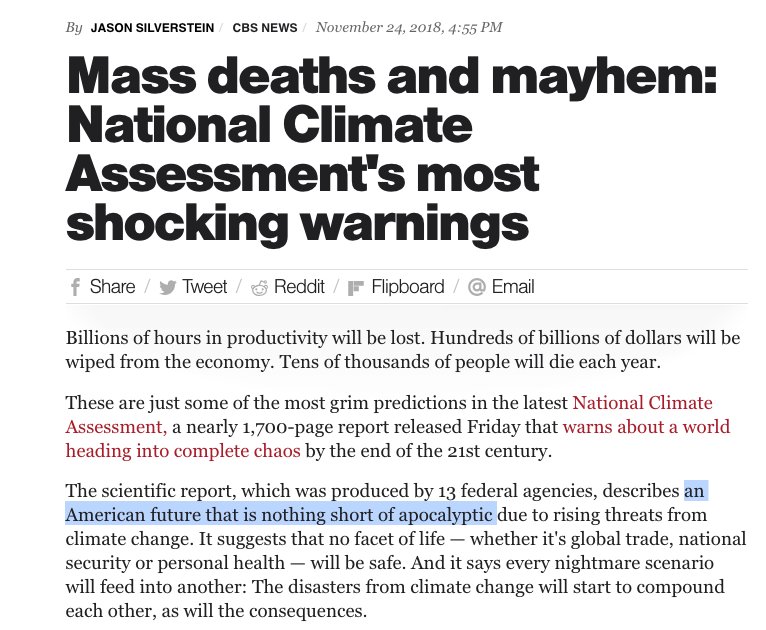 Billions of hours in productivity will be lost. Hundreds of billions of dollars will be wiped from the economy. Tens of thousands of people will die each year.

These are just some of the most grim predictions in the latest National Climate Assessment, a nearly 1,700-page report released Friday warns about a world heading into complete chaos by the end of the 21st century.

The scientific report, which was produced by 13 federal agencies, describes an American future nothing short of apocalyptic due to rising threats from climate change. It suggests no facet of life — whether it’s global trade, national security or personal health — will be safe. And it says every nightmare scenario will feed into another: The disasters from climate change will start to compound each other, as will the consequences.

An updated report is released every four years, and this latest version notes human-made climate change isn’t the only factor expected to drive these dangers. Population growth, for example, will play a part in the tragedies predicted to happen by 2100.