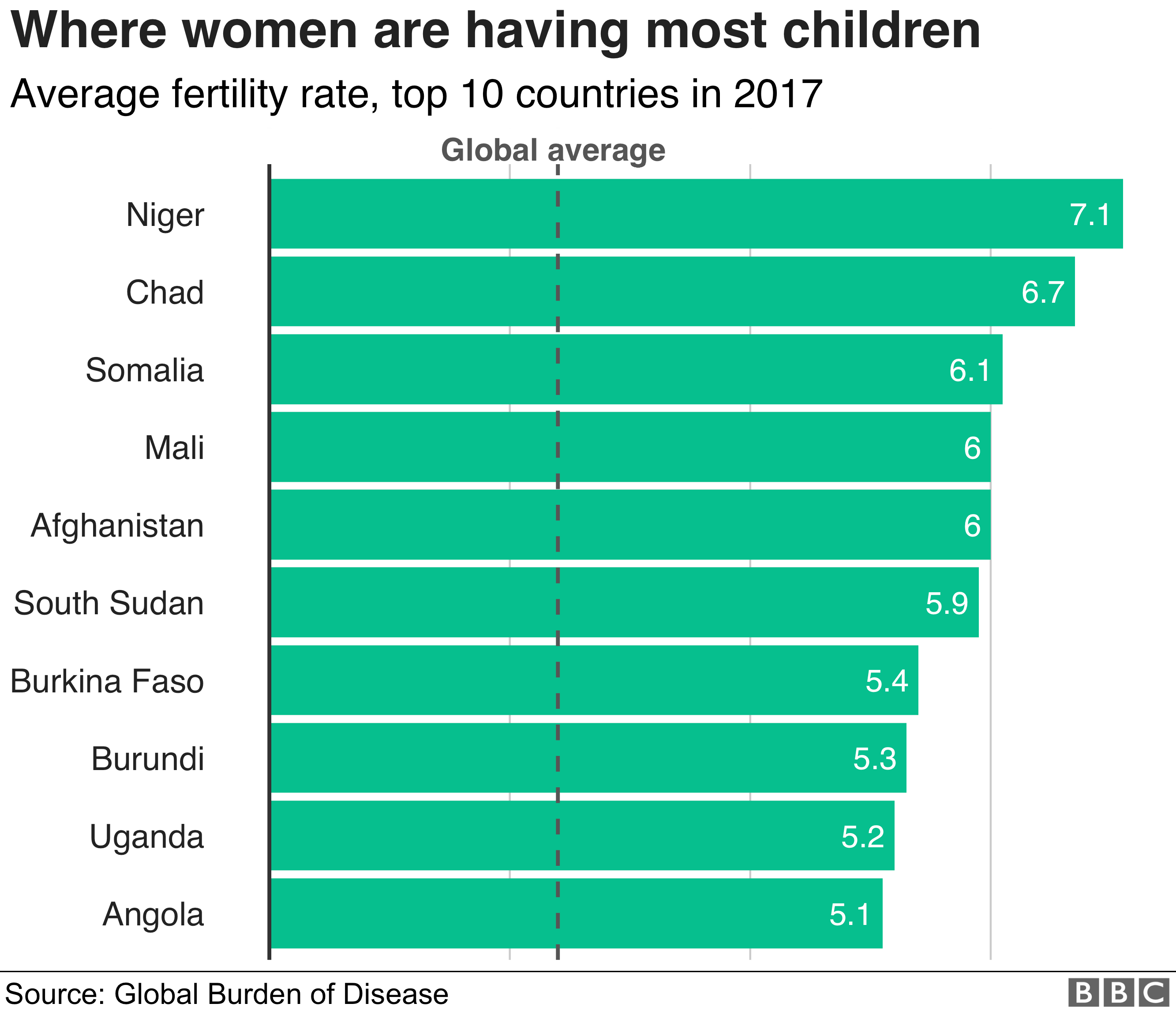 Their report found fertility rate falls meant nearly half of countries were now facing a “baby bust” – meaning there are insufficient children to maintain their population size.

The researchers said the findings were a “huge surprise”.

And there would be profound consequences for societies with “more grandparents than grandchildren”.

How big has the fall been?

The study, published in the Lancet, followed trends in every country from 1950 to 2017.

In 1950, women were having an average of 4.7 children in their lifetime. The fertility rate all but halved to 2.4 children per woman by last year.

But that masks huge variation between nations.

The fertility rate in Niger, west Africa, is 7.1, but in the Mediterranean island of Cyprus women are having one child, on average.

In the UK, the rate is 1.7, similar to most Western European countries.

How high does the fertility rate have to be?

Whenever a country’s rate drops below approximately 2.1 then populations will eventually start to shrink (this “baby bust” figure is significantly higher in countries which have high rates of death in childhood).

At the start of the study, in 1950, there were zero nations in this position.

Prof Christopher Murray, the director of the Institute for Health Metrics and Evaluation at the University of Washington, told the BBC: “We’ve reached this watershed where half of countries have fertility rates below the replacement level, so if nothing happens the populations will decline in those countries.

“It’s a surprise even to people like myself, the idea that it’s half the countries in the world will be a huge surprise to people.”

Which countries are affected?

More economically developed countries including most of Europe, the US, South Korea and Australia have lower fertility rates.

It does not mean the number of people living in these countries is falling, at least not yet as the size of a population is a mix of the fertility rate, death rate and migration.

It can also take a generation for changes in fertility rate to take hold.

But Prof Murray said: “We will soon be transitioning to a point where societies are grappling with a declining population.”

Half the world’s nations are still producing enough children to grow, but as more countries advance economically, more will have lower fertility rates.

‘We’d rather give our daughter the best of everything’

Rachael Jacobs, 38, of Kent, had her first and only child seven years ago

I know now that we can survive on what we earn as a family and still go on holiday every year. If we had more than one child we couldn’t go on holiday.

We’d rather give our daughter the best of everything than have multiple children that we can just about feed and clothe.

My partner and I are also thinking about the future. We want to be in a position where we can help her financially with university or housing. I don’t want to ever have to say that she can’t go to a party or have a new Christmas jumper.

Why is the fertility rate falling?

The fall in fertility rate is not down to sperm counts or any of the things that normally come to mind when thinking of fertility.

Instead it is being put down to three key factors:

In many ways, falling fertility rates are a success story.

What will the impact be?

Without migration, countries will face ageing and shrinking populations.

Dr George Leeson, director of the Oxford Institute of Population Ageing, says that does not have to be a bad thing, as long as the whole of society adjusts to the massive demographic change.

He told the BBC: “Demography impacts on every single aspect of our lives, just look out of your window at the people on the streets, the houses, the traffic, the consumption, it is all driven by demography.

“Everything we plan for is not just driven by the numbers in the population, but also the age structure and that is changing, so fundamentally we haven’t got our heads around it.”

He thinks workplaces are going to have to change and even the idea of retiring at 68, the current maximum in the UK, will be unsustainable.

The report, part of the Global Burden of Diseases analysis, says affected countries will need to consider increasing immigration, which can create its own problems, or introducing policies to encourage women to have more children, which often fail.

Report author Prof Murray argues: “On current trends there will be very few children and lots of people over the age of 65 and that’s very difficult to sustain global society.

“Think of all the profound social and economic consequences of a society structured like that with more grandparents than grandchildren.

“I think Japan is very aware of this, they’re facing declining populations, but I don’t think it’s hit many countries in the West, because low fertility has been compensated with migration.

“At a global level there is no migration solution,” Prof Murray says.

But while the change may challenge societies, it may also have environmental benefits given the impact of our species.

China has seen huge population growth since 1950, going from around half a billion inhabitants to 1.4 billion.

But it too is facing the challenge of fertility rates, which stood at only 1.5 in 2017, and has recently moved away from its famous one child policy.

The reason developed countries need a fertility rate of 2.1 is because not all children survive to adulthood and babies are ever so slightly more likely to be male than female.

But in China, the report shows for every 100 girls born there were 117 boys which “imply very substantial sex-selective abortion and even the possibility of female infanticide”.

That means even more children need to be born to have a stable population.