In the 3 new papers, extensive observational evidence suggests that polar bear populations are currently healthier than in the past, and their numbers have been stable or growing in recent decades.

Ten years ago, polar bears were classified as an endangered species due to model-based assumptions that said the recession of Arctic sea ice would hamper the bears’ seal-hunting capabilities and ultimately lead to starvation and extinction.

The Inuit, who have observed these bears catch seals in open water for generations, disagree.  At least this is what scientists have found upon investigation.

“There is no evidence that the fast reduction of sea-ice habitat in the area has yet led to a reduction in population size.” (Aars et al., 2017 )

Inuit observations: “… back in early 80s, and mid 90s, there were hardly any bears … there’s too many polar bears now.  Bears can catch seals even—even if the—if the ice is really thin … they’re great hunters those bears … they’re really smart … they know how to survive.” (Wong et al., 2017)

Inuit observations: “No, because polar bears can go and follow the seals further [if sea ice retreats], so they won’t have trouble hunting. Also the snow covers the [seals’] breathing holes but polar bears can still hunt, it’s just for people. There is more rough ice, more thin ice. But it won’t affect polar bears’ hunting.” (Dowsley, 2007)

“Reduction in the heavy multiyear ice and increased productivity from a longer open water season may even enhance polar bear habitat in some areas. … It seems unlikely that polar bears (as a species) are at risk from anthropogenic global warming.” (York et al., 2016)

Sometimes the “Western scientific understanding” of how the natural world operates conflicts with observations.

“The view of polar bears as effective open-water hunters is not consistent with the Western scientific understanding that bears rely on the sea ice platform for catching prey.  … [Participants] indicated that polar bear body condition is stable; they cited the fact that polar bears are capable of hunting seals in open water as a factor contributing to the stable body condition of the bears.” (Laforest et al., 2018).

The paleoclimate evidence, which shows that sea ice was thinner and less extensive than today for most of the last 10,000 years, also contradicts the assumptions about modern polar bear endangerment due to thinning ice.  One must ask: How did polar bears survive sea ice free summers in the ancient past if they existentially rely on thick sea ice to hunt prey today?

When the observations don’t agree with the models and assumptions, real scientists are supposed to reconsider their hypotheses.

Climate scientists, on the other hand, too often discard the data that conflict with their modeled assumptions and proceed to call those who question their models and assumptions names (i.e., “deniers”).

This begs the question: Why is climate science so much different than real science?

In the 3 new papers referenced below, extensive observational evidence suggests that polar bear populations are currently healthier than in the past, and their numbers have been stable or growing in recent decades.

“Traditional Ecological Knowledge of Polar Bears […] Québec, Canada … Communities also differed in their perception of the prevalence of problem polar bears and the conservation status of the species, with one-third of participants reporting that polar bears will be unaffected by, or even benefit from, longer ice-free periods. A majority of participants indicated that the local polar bear population was stable or increasing.”

“The view of polar bears as effective open-water hunters is not consistent with the Western scientific understanding that bears rely on the sea ice platform for catching prey (Stirling and McEwan, 1975; Smith, 1980). The implications of this disagreement are paramount, given that scientists suggest that the greatest threat to polar bears associated with a decrease in sea ice is a significant decrease in access to marine mammal prey (Stirling and Derocher, 1993; Derocher et al., 2004) … A recent aerial survey of the Southern Hudson Bay subpopulation concluded that the abundance of polar bears has remained steady since 1986 (943 bears; SE: 174) (Obbard et al., 2015). The survey included the entire coastal range and offshore island habitat of the Southern Hudson Bay subpopulation, except for the eastern James Bay coast. Taken together, the results of the aerial survey and the participant responses from Wemindji and Chisasibi indicate that the local population has remained stable. However, the unanimous responses from participants in Whapmagoostui/Kuujjuarapik suggest that there has been a localized increase in the number of bears near Whapmagoostui/Kuujjuarapik.”

Changes in the Catch and Climate Over Two Decades

“Half the hunters from Ittoqqortoormiit reported that they catch more polar bears than 10–15 years ago and 38% said it was the same (Table 1). A few noted the conditions vary from year to year and the ice conditions determine whether they catch a polar bear in a given year. … When asked about changes in the number of polar bears in their hunting areas in the past 10–15 years (since the introduction of the quota), 63% of hunters in both regions said there are “more polar bears.” The remaining hunters said they did not know, there was no change, or there were fewer polar bears (Table 4). A variety of responses were given as explanations; the bulk of responses mentioned quotas, sea ice timing, and restrictions on what categories of polar bears hunters are allowed to catch (authors’ note: it is forbidden to catch females with cubs, dependent cubs and bears in dens).” 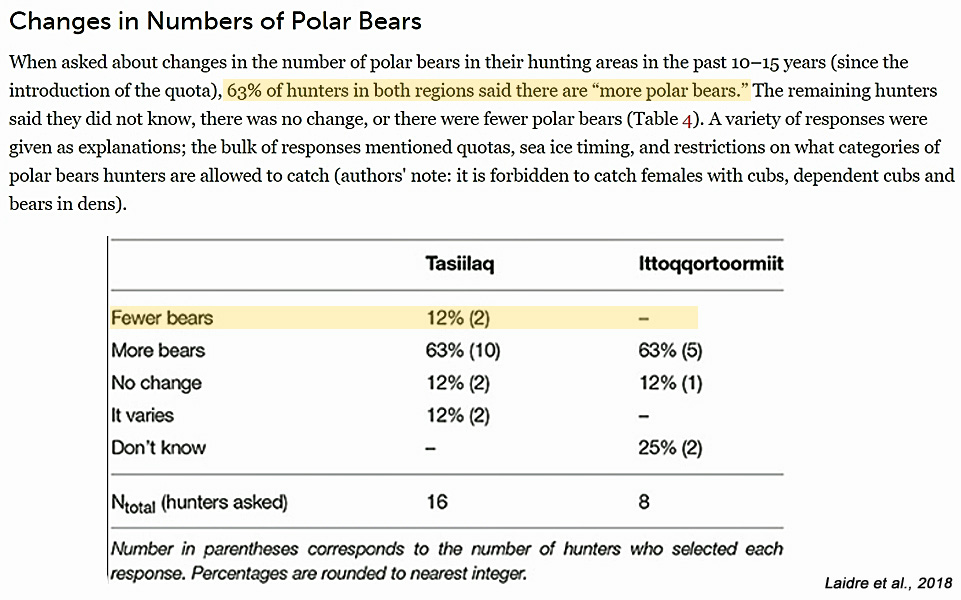 of the IUCN/SSCPolar Bear Specialist Group,

“Wilson et al. (2014, 2016) have found that despite large reductions in sea ice, particularly in summer, polar bears have not changed their habitat selection preferences in the Chukchi Sea.”

“Rode et al. 2013 documented stable or improving body condition and reproduction for polar bears captured in the U.S. between 1986–1994 and 2008–2011, a period during which substantial sea ice loss occurred, suggesting the capacity for positive population growth.”

“A new survey in the Norwegian extent of the BS [Barents Sea] subpopulation was conducted in August 2015. The ice edge was located beyond an icefree gap north of the Svalbard Archipelago. The number of bears encountered in Svalbard indicates that there is a local stock of ~200–300 bears (preliminary results), which did not differ much from the number detected in 2004.”

“The total estimated for Norwegian Arctic was just under 1000 bears, considerably higher than the total for the Norwegian side in 2004, but with a confidence interval overlapping with the earlier estimate.”

“The initial [1980] estimate of 900 bears for the DS [Davis Straits] subpopulation (Stirling et al. 1980, Stirling and Kiliaan 1980) was based on a subjective correction from the original mark-recapture estimate of 726 bears, which was thought to be too low because of possible bias in the sampling. In 1993, the estimate was again subjectively increased to 1,400 bears and to 1,650 in 2005. These increases were to account for bias as a result of springtime sampling, the fact that the existing harvest appeared to be sustainable and not having negative effects on the age structure, and Traditional Ecological Knowledge (TEK) [reports from Inuit] suggested that more bears were being seen over the last 20 years”

“TEK [Traditional Ecological Knowledge, observational reports from Inuit] suggested the FB [Foxe Basin] subpopulation of polar bears had increased (GN consultations in villages in Foxe Basin 2004–2012). During a comprehensive summertime aerial survey in 2009 and 2010 (based on distance sampling and double observer estimation) covering about 40,000 km each year, 816 and 1,003 bears were observed, respectively (Stapleton et al. 2016). This most recent study of the FB subpopulation yielded an abundance estimate of 2585 (95% CI: 2,096–3,189)polar bears (Stapleton et al. 2016), which is not statistically different from the 1994 estimate indicating a stable population. Sea ice habitat for polar bears has decreased substantially for polar bears over the last several decades in Foxe Basin (Sahanatien and Derocher 2012).”

“Body condition of KB [Kane Basin] polar bears appeared to have slightly improved between sampling periods [since the 1990s] (see SWG 2016). Overall, the data on abundance when considered with data on movements, condition, and reproduction, suggest evidence that the KB [Kane Basin] subpopulation has increased.”

“A mark-recapture survey, completed in 2006 suggested that the size of the NB[Northern Beaufort Sea] subpopulation to be 980 (95% CI: 825–1,135), and that it has remained stable over the previous three decades“

“Overall, despite the difference in methodologies, assumptions, and biases between capture–recapture studies and aerial surveys, the evidence suggests it is likely that the subpopulation has not changed in abundance since the mid-1980s.”