There are only 12 men who have walked on the moon, and only 4 are still living. Selected from the best of the best at the time, with impeccable reputations, why would any of them speak out and risk being called names like deniers of “basic physics”. Yet three of the four have: Harrison Schmitt, Charles Duke, Buzz Aldrin. (Plus others like Australian born Phil Chapman (support crew, Apollo 14) and Walter Cunningham (Apollo 7).

Maybe because they hate watching as the good name of NASA gets subverted into a pagan weather changing cult?

And because these are guys comfortable with risk.

The NASA space program was once one of mankind’s greatest scientific and engineering achievements. In 2012 49 former NASA staff including astronauts, directors of shuttle programs, flight operations, and spacecraft maintenance, wrote to NASA warning that GISS (Goddard Institute for Space Studies) was risking NASA’s reputation by making unproven remarks and ignoring empirical evidence.

Harrison has been a vocal skeptic now for at least nine years. So far the ABC has not asked him why, or anything at all on the topic. But then, he’s only a PhD in Geology, what would he know? If he had a degree in international relations and journalism, or law, he could tell us what the climate is going to do all the time.

Schmitt, Duke, Chapman, Cunningham and Aldrin are only a phone call away from our national broadcaster and the ABC gets $3m a day to cover the bill. How many years will it take for them to get curious enough to ask “why”?

If they were climate believers, how many times would we have heard about it? 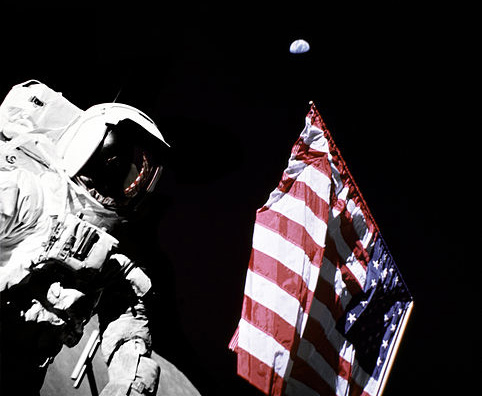 The New York Times’ Nicholas St. Fleur addressed the elephant in the room with an assist from science writer Betsy Mason. Here’s how the exchange went:

St. Fleur: “In 2009, we wrote a story called ‘Vocal Minority Insists It Was All Smoke and Mirrors,’ where we quoted you, Dr. Schmitt. The story was basically about people who think the moon landing was faked, and here’s someone who’s actually been there and walked on the moon. You were saying that ‘if people decide they’re going to deny the facts of history and the facts of science and technology, there’s not much you can do with them. … For most of them, I just feel sorry that we failed in their education.’

Schmitt: “I see no irony at all. I’m a geologist. I know the Earth is not nearly as fragile as we tend to think it is. It has gone through climate change, it is going through climate change at the present time. The only question is, is there any evidence that human beings are causing that change?”

Chorus from the audience: “Yes!”

Schmitt: “Right now, in my profession, there is no evidence. There are models. But models of very, very complex natural systems are often wrong. The observations that we make as geologists, and observational climatologists, do not show any evidence that human beings are causing this. Now, there is a whole bunch of unknowns. We don’t know how much CO2, for example, is being released by the Southern Oceans as the result of natural climate change that’s been going on now since the last ice age.

“The rate of temperature increase on the surface of the Earth and in the troposphere is about the same over this period of time, particularly since the Little Ice Age, which was not caused by human beings. Nor was the Medieval Warm Period, preceding that, caused by human beings. So that’s the only skepticism I have: What is the cause of climate change?

“Normally, we have always assumed up until the Industrial Revolution that climate change is a function of the solar cycles — and indeed, there is still very strong evidence that’s the case. So, no, there is no irony in that. I, as a scientist, expect to have people question orthodoxy. And we always used to do that. Now, unfortunately, funding by governments, particularly the United States government, is biasing science toward what the government wants to hear.

“That’s a very dangerous thing that’s happening in science today, and it’s not just in climate. I see it in my own lunar research. If NASA’s interested in a particular conclusion, then that’s the way the proposals come in for funding. So it’s a very, very serious issue, and I hope the science writers in this room will start to dig deeply into whether or not science has been corrupted by the source of funds that are now driving what people are doing in research, and what their conclusions are.”

Betsy Mason: “I just want to say that I’m a geologist, and I think that maybe you should reconsider speaking for geologists on that topic.”

Read about Boyles surprise that climate change dominated a discussion that was meant to be about the 50th Anniversary of the Apollo missions. “Fifty years ago today, for example, Apollo 7’s astronauts were putting NASA’s moonship to the test for the very first time in Earth orbit.”

We’ve lost three men who walked on the moon in the last two years. When will the ABC / BBC / CBC interview the ones still alive and ask them their views on one of the most important scientific issues of the day?