Despite sea level rise, Tuvalu Islands surface area have grown 3% over the past decades

The South Sea islands are sinking. Send us money and visas for Australia and USA fast! That’s the underlying message of many media reports on the problem of sea level rise and their effects on the Pacific Coral Islands. Here science simply gets cast aside.

Since coral islands are made up of living organisms that have always lived just below the sea level, the islands “float” like ships on the surface of the ocean. When sea level goes up, so do the corals. This is already something you learn in geography lessons at school.

Paul Kench and his colleagues have now measured the shorelines of all 101 islands of Tuvalu for the last 40 years using satellite imagery. The result: The land area grew by just under 3% during this period, despite a fairly strong regional sea-level rise of 4 mm per year. Here is the abstract of the work that appeared in February 2018 in Nature Communications:

Sea-level rise and climatic change threaten the existence of atoll nations. Inundation and erosion are expected to render islands uninhabitable over the next century, forcing human migration. Here we present analysis of shoreline change in all 101 islands in the Pacific atoll nation of Tuvalu. Using remotely sensed data, change is analysed over the past four decades, a period when local sea level has risen at twice the global average (~3.90 ± 0.4 mm.yr−1). Results highlight a net increase in land area in Tuvalu of 73.5 ha (2.9%), despite sea-level rise, and land area increase in eight of nine atolls. Island change has lacked uniformity with 74% increasing and 27% decreasing in size. Results challenge perceptions of island loss, showing islands are dynamic features that will persist as sites for habitation over the next century, presenting alternate opportunities for adaptation that embrace the heterogeneity of island types and their dynamics.” 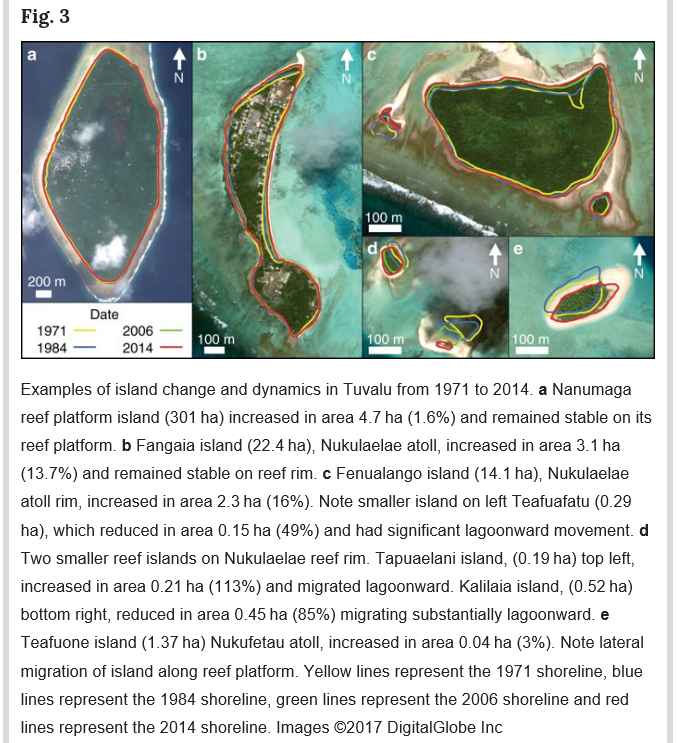 The discussion part of the paper states:

Results challenge existing narratives of island loss showing that island expansion has been the most common physical alteration throughout Tuvalu over the past four decades. Of significance, documented increases in island area over this period have occurred as the sea level has been rising.”