Analysis: ‘Rich-world scientists in the grip of a dystopian Malthusian vision have, for 40 years, manipulated public fears’ Anti-Nuclear Bias of U.N. & IPCC Is Rooted in Cold War Fears Of Atomic And Population Bombs

Advocates of nuclear power were surprised yesterday when a new report by the Intergovernmental Panel on Climate Change (IPCC) attacked the clean energy source as dirty and dangerous.

They shouldn’t have been. In truth, the IPCC has been heavily biased against nuclear and toward renewables throughout its 20-year existence.

Now, IPCC’s new report ignores research published in Science by climate scientist James Hansen showing the deployment of nuclear has been 12 times faster than solar and wind and instead cites a study by anti-nuclear author Amory Lovins attacking Hansen in a journal with an impact factor one-tenthas large as Science’s.

What gives? Why is an organization supposedly dedicated to solving climate change so opposed to the only scalable source of clean energy proven capable of rapidly replacing fossil fuels?

To answer these questions, we have to go back in time — back to the rise of nuclear fear.

In 1892, a rumor spread that Thomas Edison was making a new device that could destroy a whole city. This rumor, in turn, inspired a satiric newspaper account of a mad scientist blowing up England with a “doomsday machine.”

In his 1913 science fiction novel, A World Set Free, H.G. Wells describes “atomic bombs … that would continue to explode indefinitely” and create fall-out in the form of “radio-active vapor.”

And yet by World War II, some scientists already believed, paradoxically, that atomic weapons could end world war. When Danish physicist Niels Bohr visited the father of the atomic bomb, J. Robert Oppenheimer at Los Alamos, in 1943, his first question was, “Is it really big enough?”

According to Oppenheimer’s biographers, Kai Bird and Martin J. Sherwin in their Pulitzer-winning American Prometheus, Bohr was asking, “would the new weapon be so powerful as to make future wars inconceivable?”

The weapon devised as an instrument of major war would end major war. It was hardly a weapon at all, the memorandum Bohr was writing in sweltering Washington emphasized; it was “a far deeper interference with the natural course of events than anything ever before attempted” and it would “completely change all future conditions of warfare.” When nuclear weapons spread to other countries, as they certainly would, no one would be able any longer to win.

The night of the Hiroshima bombing, Oppenheimer echoed Bohr when he told his men that “the atomic bomb is so terrible a weapon that war is now impossible.” After the bombing of Nagasaki, physicist Ernest Lawrence toldOppenheimer that the bomb was so horrible it wouldn’t ever again be used.

After the war, Oppenheimer argued that atomic scientists working under the auspices of the United Nations should control the entire nuclear fuel cycle — including mines and nuclear plants in foreign nations — a proposal that was rejected immediately by the U.S., Britain, and the Soviet Union.

Soon, scientists went from worrying whether the fission bomb was big enough to fearing that fusion (thermonuclear) bombs were too big, note Oppenheimer’s biographers. Oppenheimer urged the Pentagon to build smaller, more tactical nuclear weapons, on the grounds that they would be more useful, while he simultaneously pressed for disarmament. But, write Bird and Sherwin, “by 1949, [Oppenheimer] despaired of making progress in the foreseeable future on nuclear disarmament.”

The problem was he could never explain how disarmament would work. “You know, I listened as carefully as I knew how,” said Oppenheimer ally and Secretary of State, Dean Acheson, “but I don’t understand what ‘Oppie’ was trying to say. How can you persuade a paranoid adversary to disarm ‘by example’?”

In response to his frustrations, write Bird and Sherwin, “Oppenheimer tried to use his influence to put a damper on the government’s and the public’s growing expectations for all things nuclear” — including atomic energy, something Oppenheimer just three years earlier had said was critical for the “continuation of this industrial age.”

In the summer of 1949, write Bird and Sherwin, “the press quoted [Oppenheimer] as saying that ‘nuclear power for planes and battleships is so much hogwash… he also talked about the potential dangers inherent in civilian nuclear power plants.’”

The war on nuclear had begun.

Of Babies and Bombs

By 1957, a veteran of the Manhattan Project, Ralph Lapp, told CBS’s Mike Wallace that fall-out from weapons testing would result in “leukemia,” a false claim based on bad science.

“Suppose,” CBS’s Wallace invoked the doomsday machine, and asked Lapp, “science could invent a source of fantastic energy that would be a great good to mankind but that also might enable a scientist to destroy the entire world with the push of a button — as a scientist would you help invent that force?”

Lapp replied, “I would not. I think this is the case where we are finding that scientists are coming more… are becoming more and more socially conscious.”

Nuclear weapons went from being a guarantor of peace through deterrence for physicists Bohr, Lawrence, and the pre-1949 Oppenheimer to being a cartoon doomsday machine in the hands of crusading scientists and sensationalizing journalists.

Women and mothers were targeted. “Radioactivity is poisoning your children,” read the headline in a January 1957 issue of McCall’s, a leading women’s magazine.

Even the journal Science, in 1961, published an article noting that strontium-90, a radioactive isotope produced by weapons testing, being found in the teeth of children born during nuclear weapons testing, even though the levels were 200 times less than those found to cause cancer. 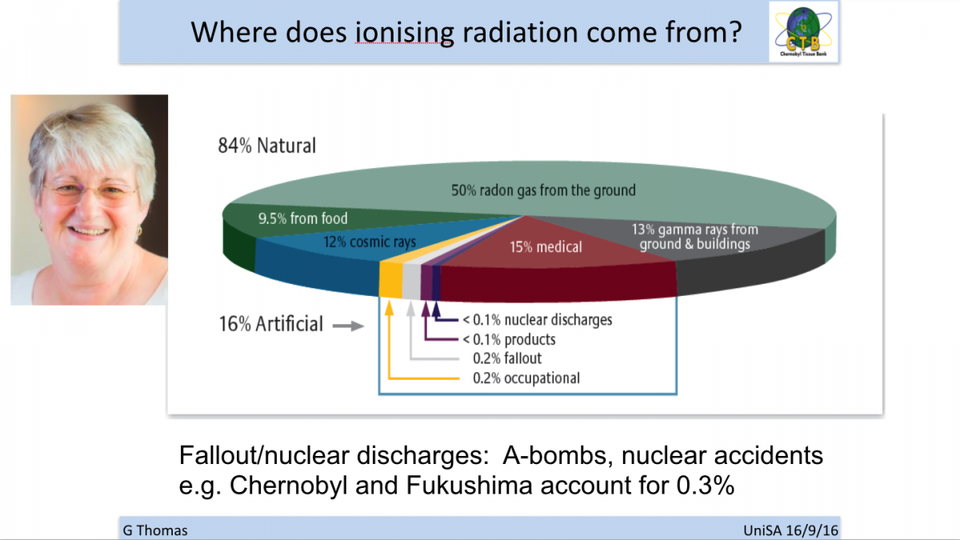 Just 0.2% of our exposure to ionizing radiation comes from fall-out.GERRY THOMAS

One year later, an enterprising Sierra Club activist hyped fears of fall-out to kill a nuclear plant in northern California. His allies came to fear that infinite nuclear energy would result in overpopulation.

“If a doubling of the state’s population in the next 20 years is to be encouraged by providing the power resources for this growth,” wrote Executive Director of the Sierra Club David Brower, “the state’s scenic character will be destroyed. More power plants create more industry, that in turn invites greater population density.”

“It’d be little short of disastrous for us to discover a source of clean, cheap, abundant energy,” wrote anti-nuclear leader Amory Lovins, “because of what we would do with it.”

Neo-Malthusian conservationists often hid their motivations. When asked in the mid-1990s if he had been worried about nuclear accidents, Sierra Club anti-nuclear activist Martin Litton replied, “No, I really didn’t care because there are too many people anyway … I think that playing dirty if you have a noble end is fine.”

The reason the neo-Malthusians had to attack nuclear power is because it undermined their case that the world was on the brink of resource scarcity and environmental degradation from overpopulation. Infinite nuclear energy meant infinite fertilizer, freshwater, and food — and a radically reduced environmental footprint.

And so they grabbed on to the fall-out scare pioneered by Lapp. “[A] million people die in the Northern Hemisphere now, because of plutonium from atmospheric [weapons] testing,” claimed Brower.

Others invented problems. In 1971, the physicist John Holdren made the pseudoscientific claim that “the second law of thermodynamics and heat transfer theory put an upper limit on society’s use of energy.”

Notes historian Thomas Wellock, “Holdren’s thermodynamic arguments did not single out nuclear power as the chief problem,” but “they reduced nuclear power to just another problematic energy source.”

The United Nations embraced the neo-Malthusian attack on nuclear power in a 1987 report called “Our Common Future.” All but one of the report’s 194 references to nuclear are negative. “The potential for the spread of nuclear weapons is one of the most serious threats to world peace,” reads a typical passage.

Rather than move to fossil fuels and nuclear, as rich nations had done, poor nations should instead use wood fuel more sustainably, recommends the report. “The wood-poor nations must organize their agricultural sectors to produce large amounts of wood and other plant fuels.”

The lead author of “Our Common Future” was Gro Brundtland, former Prime Minister of Norway, a nation which just a decade earlier had become fabulously wealthy thanks to its abundant oil and gas reserves.

Figures like Brundtland promoted the idea that poor nations didn’t need to consume much energy, which turned out to be howlingly wrong. Energy consumption is as tightly coupled to per capita GDP today as it was when today’s rich nations were themselves poor.

Even so, the IPCC report on keeping temperatures below 1.5 degrees rests heavily on the idea that poor nations can grow rich while using radically less energy. “Pathways compatible with 1.5°C that feature low energy demand,” IPCC says, “show the most pronounced synergies and the lowest number of trade-offs.” 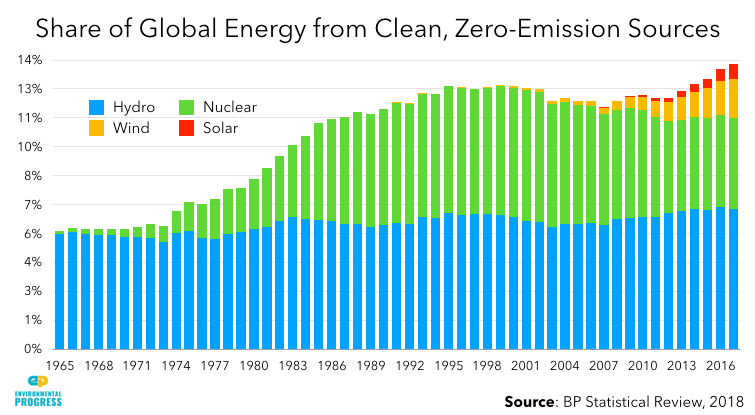 The result? The share of energy globally coming from zero-emission energy sources has grown less than one percent since 1995. The reason? The increase in energy from solar and wind has barely made up for the IPCC-encouraged decline in nuclear.

That reality didn’t seem to bother Holdren, who served as President Barack Obama’s science advisor from 2009 to 2017. While in power, Holdren hypedsolar and wind and cast aspersions on nuclear — in language very similar to that used by the IPCC.

The good news is that the Cold War fears of nuclear and population bombs, hyped by misanthropic Malthusians, turned out to have been unfounded. As nations grew rich, their fertility rates plunged. And as nuclear weapons spread, the number of deaths from wars and conflicts declined 95 percent.

As for mad men with doomsday machines, sometimes they fall in love. President Donald Trump credits North Korean President Kim Jong-Un’s “beautiful letters,” but it was more likely his nuclear-armed ICBMs, which may also be the key to Korea’s eventual reunification.

The bomb exercises restraint. When General William Westmoreland tried to move nuclear weapons to South Vietnam, he was immediately over-ruled by President Lyndon Johnson — a man who didn’t hesitate to order the bombings of civilian populations with conventional weapons.

The paradoxical nature of the new situation — where “the only winning move is not to play,” in the memorable line from the 1983 movie, “War Games” — takes getting used to. Historian Richard Rhodes quotes Soviet Leader Nikita Khrushchev’s reflections upon his “initial encounter with existential deterrence” in 1953:

When I was appointed First Secretary of the Central Committee and learned all the facts about nuclear power, I couldn’t sleep for several days. Then I became convinced that we could never possibly use these weapons, and when I realized that, I was able to sleep again.

As for doomsday, it appears to be behind us. Of the 50 million people who died in World War II, 99.5% were killed by conventional, not nuclear, weapons. What emerged on the other side of the apocalypse was a bomb big enough to end world war.

As such, Niels Bohr, the early Oppenheimer, and Ernest Lawrence may have been right all along. Concludes Rhodes, the bomb’s wisest and most humanistic biographer:

The discovery in 1938 of how to release nuclear energy introduced a singularity into the human world — a deep new reality, a region where the old rules of war no longer applied. The region of nuclear singularity enlarged across the decades, sweeping war away at its shock front until today it excludes all but civil wars and limited conventional wars …

Science has revealed at least world war to be historical, not universal, a manifestation of destructive technologies of limited scale. In the long history of human slaughter, that is no small achievement.