HARRISON FORD RIPS CLIMATE SKEPTICS: ‘WE KNOW WHO THEY ARE!’ – ‘We are facing what is quickly becoming the greatest moral crisis of our time’

Flashback: Planet-healer/Climate Activist Harrison Ford: ‘I often fly up the coast for a cheeseburger’

“That those least responsible will bear the greatest costs,” he said.

“Now let’s, let’s turn off our phones, let’s roll up our sleeves and let’s kick this monster’s ass!”

Harrison Ford Rages: ‘The Future of Humanity Is at Stake’ – We are ‘shit out of time’ to save the planet from ‘global warming’

Harrison Ford hits out at global inaction on climate, warns of ‘disastrous’ consequences – Ford said he hoped the “body politic will be able to finally do something about it”.

“It seems that it’s the right time,” he said. “We’re now all in this point in time on this planet. And if we don’t work together, the consequences are disastrous.”

“The planet will be OK, there just won’t be any damn people on it.”

Years of Living Hypocritically: Five Alarmist Celebs and Their Double Standards – ‘James Cameron, former Governor Arnold Schwarzenegger, and actors Harrison Ford, Matt Damon and Ian Somerhalder who are worth a collective $1.2 billion’ – ‘By their own standards — their lifestyles do more harm to the environment than that of the average citizen. Cameron maintains multiple estates and a fleet of fossil-fuel burning vehicles’

Actor Harrison Ford’s Green Religion: ‘I needed something outside of myself to believe in and I found in nature a kind of God’

Flashback: Michael Crichton: ‘One of the most powerful religions in the Western World is environmentalism. Environmentalism seems to be the religion of choice for urban atheists.’ 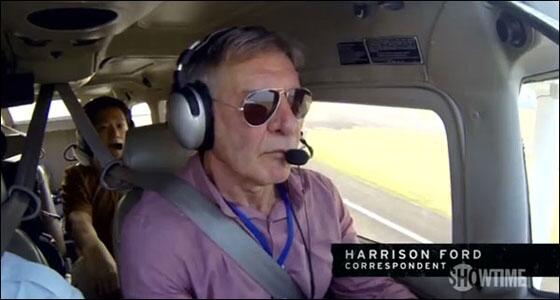 Planet-healer/Climate Activist Harrison Ford: ‘I often fly up the coast for a cheeseburger’