by P Gosselin / Sep 8, 2018
My daughter will be visiting Wilmington next week, and so Hurricane Florence has been very much on my mind.

Days ago, almost all weather models showed the cyclone curving out into the North Atlantic and going nowhere, but they’ve turned out to be wrong.

Bastardi saw it a week ago

Already a week ago veteran meteorologist Joe Bastardi got into the act, and his hunch did not quite agree with the models. On September 1st he brought up the real possibility of Florence missing the turn to the north, and instead heading out to the US east coast. What follows is the chart Joe used on his September 2 Daily Update: 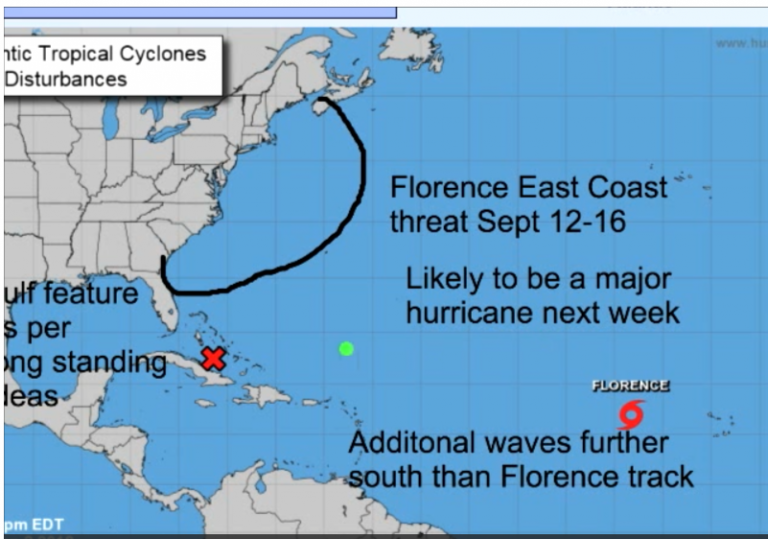 On September 2nd, Joe Bastardi warned Florence could head to the US east coast. Chart: Weatherbell.

Today we already know that Joe’s forecast of Gordon was accurate, and now we are seeing that his hunch of Florence missing the turn to the north was right on.

On his Daily Update of Wednesday, September 5, it was becoming clear Florence had little intention of turning northward as Joe’s chart tells us: 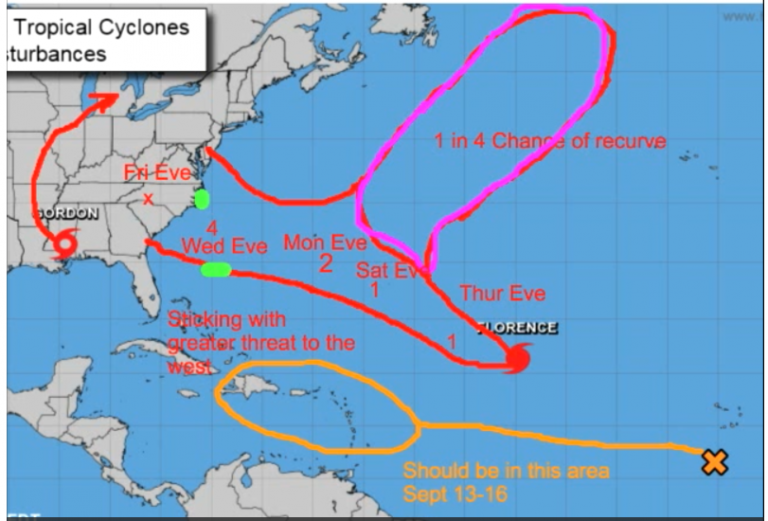 By September 5 Joe had already sniffed out the likely general track. – more than a week before Florence is forecast to strike the east coast. Chart: Weatherbell.

A day later at his Daily Update, on Thursday (September 6), ahead of everyone else, Joe showed Florence generating into a monster Category 4 storm and on a possible path to the Carolinas: 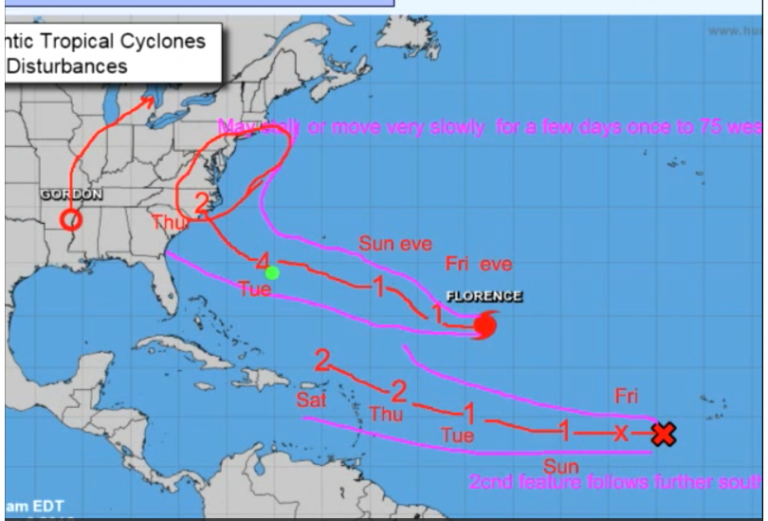 How does he do it? The veteran meteorologist not only uses models to make his forecasts, but relies heavily on analogs, i.e. similar recorded patterns having frequently occurred in the past. It’s happened before, and similar events can happen again.

His method often allows him to be days ahead of the purely mathematical models used by leading weather agencies, who find themselves constantly correcting them with every run. So today we wait with suspense to see Joe’s latest news on Florence’s projected track.

Models not in agreement

Though the latest forecasts from the different models are just about unanimous on Florence plowing into US coast (with still a small chance of curving out northward before reaching land) they are still in disagreement where the hurricane will strike the coast.

Dr. Ryan Maue at Twitter informs the US GFS model has Florence landfalling on the coast of NORTH CAROLINA:

No change from the GFS model for #Florence… still a major hurricane landfall somewhere in the Carolinas by Thursday next week.

Since the track is curved, a small deviation or change in forward speed could yield a different landfall point or even a miss offshore. pic.twitter.com/1ImFP9UUuW

Meanwhile this morning Swiss meteorologist Jörg Kachelmann points out that the European model has Florence aiming between the GFS and UKMet models. Again the models are purely mathematical computations and do not directly take analogues into consideration like Joe Bastardi does.

So follow Joe Bastardi’s daily updates at Weatherbell for the latest refined projections. Joe often sides with the European model.

Keep in mind, as every meteorologist knows, weather is highly unpredictable, and so surprises can never be excluded.

One thing is certain: the global warming ambulance chasers and fake CNN-type media will be making all sorts of hysterical claims once Florence hits the coast. Naturally, despite all their climate “expertise”, none of these climate doomsday prophesiers ever had a clue about what track Florence would follow days ago.

Yet they’ll be the first (after the fact) to claim they predicted this sort of thing all along, and blame it on manmade climate change. The reality is that hurricanes have been trending downward over the past 50 years.

What’s interesting about Florence is its relatively high latitude start position. As Dr. Philip Klotzback mentioned at Twitter, in the past no hurricane at Florence’s position ever managed to make it to the US east coast. All of them have turned away and disappeared somewhere in the Atlantic:

33 named storms (since 1851) have been within 100 miles of #Florence‘s current position. None of these storms made US landfall. The closest approach was #Hurricane George (1950) – the highlighted track. However, Florence does not appear to be taking a climatological track. pic.twitter.com/4x02pasgPg

Get ready for insane climate headlines

But Florence has managed to find its own track to the US east coast. So expect the global warming ambulance chasing scientists to call it “UNPRECEDENTED!” and say it must be because of human emissions of CO2! The media will accept it as Gospel Truth and go crazy with hysterical headlines. The USA Today here has already begun using the “unprecedented” label.

So what would Joe Bastardi, the person who was first to forecast the event, say about it? Joe will tell you it’s all natural, and not because of humans emitting some CO2 into the air.