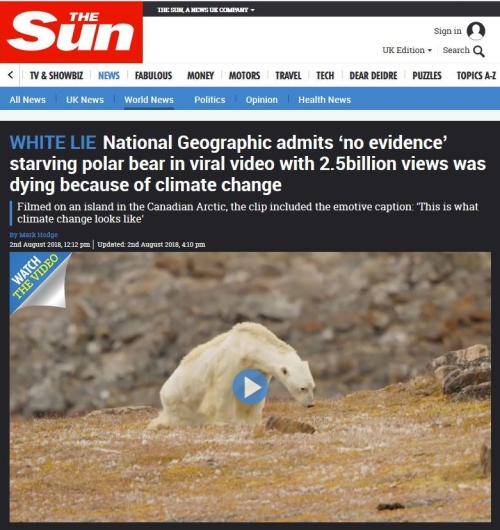 But how do you tell the difference between polar bears made thin by man-made climate change and those who are thin due to natural causes?

You can’t. Even a necropsy will not be conclusive because there are so many natural reasons for a bear to lose weight — and even starve to death — that’s it’s virtually impossible to say that any thin bear is skinny due to a lack of sea ice.

Emaciated polar bears like the one above from Somerset Island in the Canadian Arctic,1 captured on camera in August 2017, are being used to promote the idea that polar bears are already dying of starvation due to climate change. That’s a big white lie, as the headline above suggests: seven months later, National Geographic has admitted as much. Here I show why it could not have been true in the first place (with references from the scientific literature).

This popular white lie is relevant to three recent (July 2018) incidents: the attack on a Svalbard cruise ship guard by a skinny Barents Sea bear, the seven-months-too-late “apology” issued by National Geographic for conclusively blaming climate change for the emaciated polar bear in their popular 2017 video, and the fatal mauling of an Arviat father by a skinny Western Hudson Bay polar bear. All three incidents have been blamed on climate change by someone or other.

For example, Andrew Derocher perpetuated the white lie recently (31 July 2018) when he implied climate change was probably to blame for the skinny bear that mauled the man in Svalbard (even while admitting that attribution wasn’t scientifically supportable):

A WWF spokesperson said something similar.

Steve Amstrup from Polar Bears International made comments virtually identical to Paul Nicklen’s statement about the Somerset Island emaciated bear (“This is what starvation looks like“) which he used to fulfill his own activist propaganda needs, and National Geographic‘s “apology” for “going too far” (25 August 2018) with their original (December 2017) story:

“Editor’s Note: National Geographic went too far in drawing a definitive connection between climate change and a particular starving polar bear in the opening caption of our December 2017 video about the animal. We said, “This is what climate change looks like.” While science has established that there is a strong connection between melting sea ice and polar bears dying off, there is no way to know for certain why this bear was on the verge of death. Above is an updated version of the video.”

CONFLATING A TREND WITH AN OBSERVATION

The trend data belies the fact that sea ice loss has never been scientifically blamed for the emaciated state of any particular bear or group of bears. Why not?

Because there are at least eleven natural causes of loss of body condition for polar bears (getting thinner and/or emaciated to the point of death) that must be ruled out before starvation can be blamed on lack of sea ice (many of which require a necropsy):

The reason a close examination of a thin bear is required to determine the cause of its condition is apparent below (even more so if the cause was an illness like cancer):

“I captured an emaciated but very large male polar bear one autumn when he should have been near his maximum weight. His weight was less than half that of similar-size males at that time. He seemed to be fit and his teeth were in excellent shape. On examination, however, we discovered that his maxilla [upper jaw] was broken through (Fig. 27.(0), and there was a pronounced gap in his palate. The front portion of his upper jaw was attached only by the skin and musculature of his lips. His ability to bite and hold large prey was seriously compromised. How tbis injury was sustained is not clear. He has not been recaptured, and given the bear’s lean state just before tbe harshest season of the year, I suspect he did not survive the winter.“[Amstrup 2003:602, my bold]

As explained in my previous post, the few bears that come ashore in late spring (perhaps lured by abundant bird eggs on shore) and become stranded by retreating sea ice that does not make a timely return, are not victims of climate change per se but rather casualties of their own poor judgment. In the recent examples cited in Svalbard, the bears involved were not forced ashore but chose to do so, perhaps due to lack of experience and/or competition on the ice for available seals (items 1-3).

The last three items in the list above (9-11) reflect conditions in winter and spring that can effect survival and body condition later in the year but will not be obvious from a necropsy. These causes of poor body condition are more likely to be present if more than one bear is affected in a local area.

Similarly, #10 (thick snow over ice) was the likely reason that many bears that came ashore in less than good condition near Churchill in the 1980s (Ferguson et al. 2005) and perhaps for the poor condition and lower cub survival of bears in the 1980s (Derocher and Stirling 1992, 1995).

And #11 (less food for seals in summer) explains why the condition of virtually all bears in the Chukchi Sea improved after 2006 when there was less summer ice compared to the 1980s, because less summer ice meant more time for seals to feed and therefore more fat seal pups for polar bears to eat the following spring (Rode et al. 2013, 2014, 2018).

In any case, the trend data is inconclusive. The summary paper by Stirling and Derocher (2012) is still presented as “evidence” that sea ice declines caused declines in body condition that eventually led to population decline, even though the Western Hudson Bay data on body condition has not been updated since 2004 and in any case never explained the decline in body condition that happened in the 1980s (before sea ice declined). More importantly, the trend from Western Hudson Bay is not matched by similar trends from other regions.

Contrary to predictions, Chukchi Sea polar bears have became fatterwith less summer sea ice (Rode et al. 2013, 2014, 2018), not thinner. And for years, the body condition of Southern Hudson Bay bears declined only slightly (Obbard et al. 2004, 2006, 2007, 2013, 2015, 2016), even though the decline of sea ice since 1998 has been as severe as for adjacent Western Hudson Bay bears. Only by an application of statisitcal magic did the latest population count of SH bears show a slight decline (Obbard et al. 2018), and body condition data was not revealed. As noted above, the authors did not blame lack of sea ice for the poor survival of Southern Hudson Bay cubs in 2015: they left it unexplained.

Bottom line: Trends don’t explain individual observations. When polar bear specialists raise the point that trends in declining weights of polar bears correlate to trends in early breakup dates or an extended ice-free season (see discussions here and here) in the context of explaining the state of a particular thin or starving bear, they are perpetuating the white lie.