A few thousand years ago, sea surface temperatures in the South China Sea were at least 2°C warmer than they are today. Mass coral death events routinely occurred due to severe bleaching (Xu et al., 2018).

In more recent centuries, a new study reveals that there were more bleaching events in the 1750s and 1890s — during a period encompassing the Little Ice Age — than there have been in recent decades (Kamenose and Hennige, 2018).

Obviously, corals were able to survive past bleaching events, which are naturally-occurring and “by no means a new ecological phenomenon of current global warming” (Xu et al., 2018).

Evidence for the Thermal Bleaching of Porites Corals

From 4.0 ka B.P. in the Northern South China Sea

“This study provides evidence that thermal coral bleaching events have occurred in the warmer mid-Holocene (where maximum monthly summer SST was 2 °C higher than at present) in Hainan island. … We carried out this pilot study to explore the responses of corals to abnormally warm conditions in prehistoric periods. Four massive Porites coral fossils that died 3800 – 4200 years ago were collected from the Wenchang fringing reef, Hainan Island, NSCS. The reconstructed SST just prior to the mortality surfaces and growth discontinuities were higher than the [modern] maximum summer SSTs in the NSCS [Northern South China Sea]. This indicated that the corals’ deaths and interruptions in growth – which were observed to be in summer – were accompanied by an anomalously high SST [sea surface temperature]. Enhanced Δδ18O suggested increased evaporation and high-SSS conditions, attributable to warm sea surface temperatures.”

“A significant negative shift in δ13C just prior to mortality surfaces and growth discontinuities indicated a reduced photosynthetic intensity of symbiotic zooxanthellae. Together, this evidence for increased SST and SSS and decreased photosynthetic intensity strongly suggest that the growth hiatuses and coral deaths observed were the results of severe coral bleaching. This in turn indicates that coral bleaching events under high SST conditions have already occurred in the mid-Holocene and are by no means a new ecological phenomenon of current global warming.” 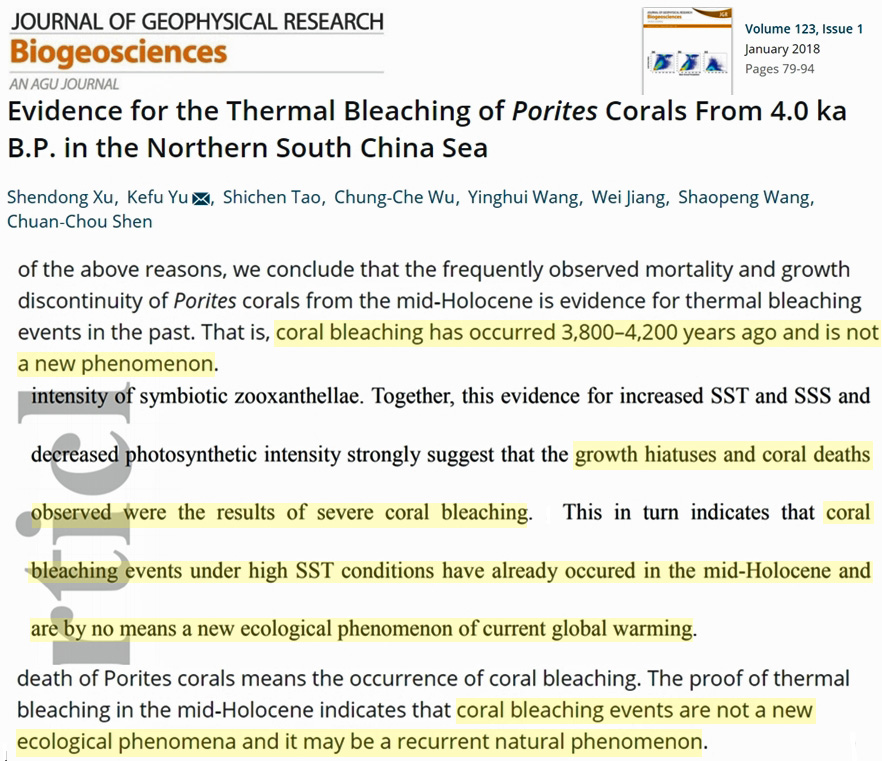 “Reconstructed bleaching was evident through the entire available record from 1575 to 2001. To determine any GBR-wide bleaching patterns, corals were pooled from all regions in the GBR spanning 15.13 to 22.23°S. Quantitative assessments of bleaching were conducted between 1620 and 2001 for frequency and 1640–2001 for prevalence. Outside of these periods, while we have documented historic bleaching, it is possible that the number of cores available drove the patterns observed.” 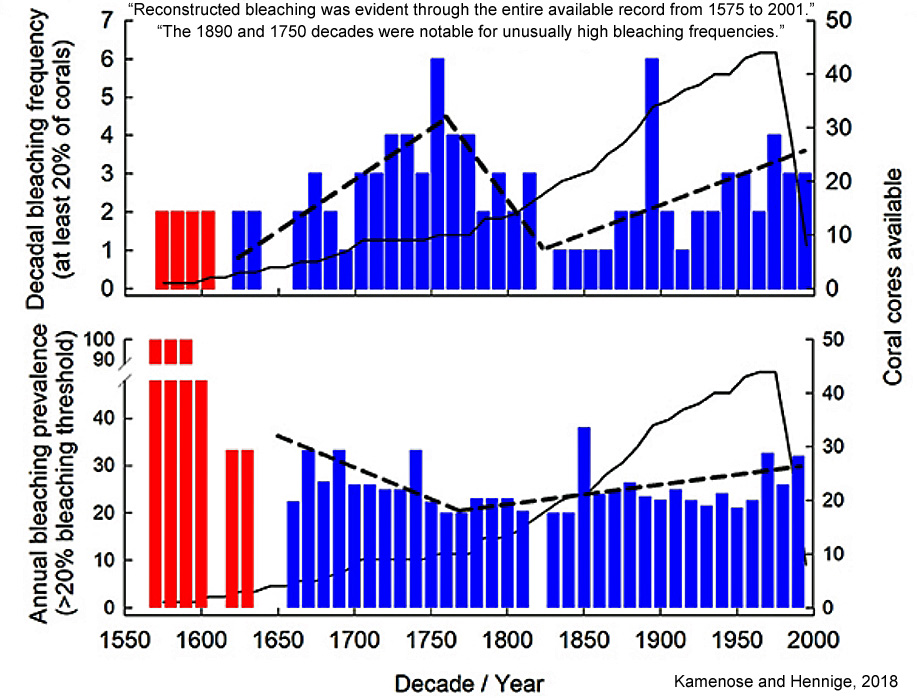